Hellllllllllllllllll no. Just watching those videos freaked me the hell out. I don’t have a lot of phobias in life, really it’s just two things. The first being spiders, it doesn’t matter how big or how small those fuckers just freak me out. I think it’s because I watched the movie Arachnophobia when I was wayyy too young and ever since then something about spiders messes me up. The other main fear I have is exactly what you just watched, getting stuck in an elevator. It’s a random fear to have I admit, but for whatever reason every time I’m in an elevator I can’t help but be a little nervous until I see those doors open. I don’t know where it stems from, I don’t know why, it’s just something that has always freaked me out.

When I used to work at the advertising agency Hill Holiday in the city I would go into this gigantic building on State street. For those who have no idea what I’m talking about, it’s this bad boy 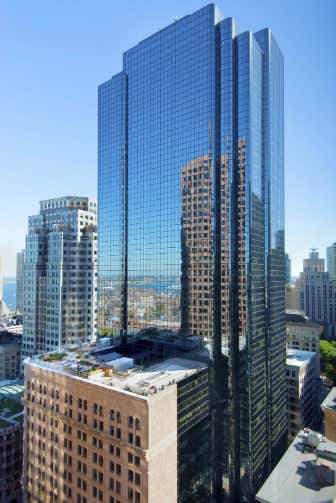 Obviously this isn’t even the tallest building in Boston, but for me it was the tallest building I’d ever worked in. If I remember correctly the offices were pretty much at the top of the building, let’s call it a floor in the high 30s and every single morning when the elevators would be packed and we would begin our journey up I always said a quick prayer that we wouldn’t get stuck. That was with a bunch of normal sized humans too so when I saw the Blazers were stuck in this elevator for around 30 minutes it made my skin crawl. That is a lonnnnnnnnnng time to be stuck in an elevator. I cannot imagine what it must have been like to be trapped like that with all those gigantic humans, I would lose my shit. Also you know someone like Kanter was farting or something thinking it was funny and everyone probably wanted to murder him.

But the more I think about it, I’m not totally convinced there wasn’t some foul play here. The Celtics are playing this Blazers team on a B2B tomorrow, and they’re cruising right now having won 4 straight. We all know the Celtics are famous for doing shady things to mess with their opponents dating all the way back to the Red Auerbach days, so I can’t completely rule out that’s what’s going on. A little weird to do it so far in advance, but hey whatever helps you get a mental edge. Would anyone be surprised if their hotel’s fire alarm also coincidently went off tomorrow morning at 3am? The Celts are desperate for wins right now so we officially cannot rule out anything. It’s what Red would do and you know it.

I’m glad it all worked out and everyone escaped safely, but if I’m a Blazer I’m taking the stairs for the rest of my stay thank you very much.