I was scrolling twitter today when I came across this video from News 12 Long Island and I think I can officially dub it the most cringe worthy video on the internet. When I came across the video, I was just scrolling on twitter, minding my own business. I actually thought the video was a sploof. Making fun of Islanders fans for caring so much about John Tavares months ago. Nope. It is dead serious.

‘Dear John’ is a video made by News 12 Long Island to show John Tavares how much Islanders fan miss him and how sad they are that he is gone. The only thing is….I don’t think they miss him? I actually think they fucking hate the dude.

Frankie Borrelli is the biggest Islanders fan I know. Kid’s a true fan. So I take his word as basically the voice of the Islanders fan base and holy shit does that kid hate John Tavares. Granted he did put a video of him crying onto twitter after Johnny T signed in Toronto. But Frankie has moved on, just as the rest of the fan base should.

The responses to the video from Islanders fans are hilarious too. Just a complete swing and miss from News 12. 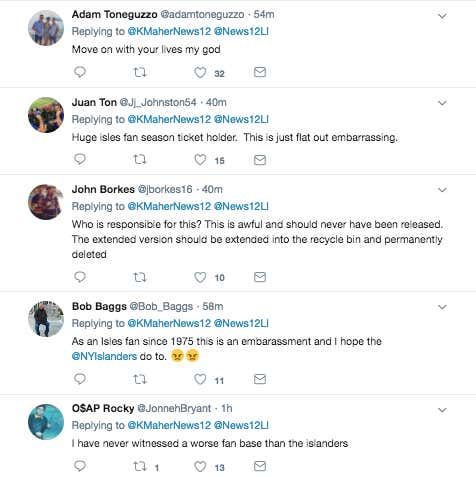 I think I’ll be at the game on Thursday night when Tavares returns to the Coli and all I have heard is that the boo’s will be so loud it will overcome any sort of tribute video. Got to imagine Kimmy and Tom won’t be too happy with that.