Source – It’s been nearly a week since Florida police started bragging about their big “human trafficking” bust, an operation that pulled in professional football owner Robert Kraft, more than 150 other men, and several Chinese immigrant women associated with Asian spas in Palm Beach County. Police say the spas were fronts for prostitution, that the workers there were victims of sex trafficking, and that their six-month long investigation was time well spent.

Six months is a long time, however, and it’s hard to reconcile the cops’ timeline with their heroic rhetoric. If the women employed at these businesses were really the victims of “modern slavery,” why did police take six months to get them out of that situation? Why did it require repeat intimate undercover visits and building misdemeanor prostitution charges against all sorts of random men before these “heroes” decided to intervene?

It’s one of many elements that don’t add up with what prosecutors are saying in public and what’s actually happened in the case. …

Police keep calling the women that worked at Orchids of Asia and the other spas that were part of the sting “trafficking victims.” But most have declined to cooperate with police as such.

Martin County Sheriff Snyder told CNN today that police were having trouble getting one woman in custody to “cooperate” in explaining why they would “go and allow themselves to be trafficked.”

“They had the ability, they could’ve walked out into the street and asked for help,” he continued. … Instead of taking this as a sign that these women were willingly engaging in this work, police continue to seek ways to explain away this evidence. … This type of claim is made regularly by police in these sorts of investigations. …

Patriots owner Robert Kraft is accused of getting a blow job from one of these women. …

But beyond Florida busybodies and national-media-courting cops, it’s unclear that anyone else has benefited from all of this.

Law enforcement has yet to back up the serious claims their massive operation was premised on. They’ve also backed down from some of the more shocking assertions offered at the start—even as more media have run with the sex-slavery ring narrative. Whatever comes, it’s clear this story has already developed meme-like proportions that obscure the reality of the situation. Perhaps the truth lies somewhere between dens of captive sex slaves and totally empowered and free workers, but we’ll never get there by treating this as a movie-style rescue fantasy.

Interesting. A very interesting take on this whole investigation. And before we start attacking the person who wrote it (and the handsome, youthful, charming gentleman blogging about it) as some heartless, pro-sex slavery monster defending the wealthy and powerful at the expense of these trafficked victims, here’s the author of the piece: 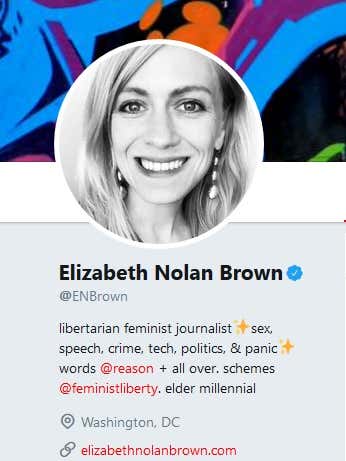 I’m not going to speak for Elizabeth Nolan Brown, but I’m going to go way out on a limb and assume this “libertarian feminist journalist” who reports on sex and crime is not in favor of oily, organized-crime henchmen in designer clothes grabbing girls off the streets and drugging them into a life of forced prostitution like they did to Liam Neeson’s daughter in Taken. But that she is OK with two grown adults consenting to a sex act for money behind closed doors at a private business where no one is harmed and every goes away happy.

Again, I’m just speculating. But if that’s what she’s saying, I agree with Elizabeth Nolan Brown. If there’s actual human trafficking going on at Orchids of Asia Day Spa, it’s just about the worst crime anyone could be involved in. So let’s hear it. Let’s hear the evidence. Let’s get cracking on those widespread RICO indictments and let’s see the wholesale round up of these kidnapping bastards being led away in handcuffs already.

But based on what she’s saying, these investigations follow this same pattern all the time.

The whole case is reminiscent of a 2016 sting in Seattle, announced with similarly dire fanfare but yielding nothing but prostitution findings (and a lot of misery for those targeted by police).

If there’s sex slavery going on in Jupiter, Florida and you’re angry about it, I’m with you all the way. If there are men going into spas for Rub & Tugs by perfectly-willing employees making a living for themselves and you’re angry about it, what exactly is your glitch? Like I said yesterday, my town police shut down one of these places not two miles from my house. And while it was operating, it hurt no one. It didn’t harm the town in any way. I never even noticed it was there other than joking that it was no doubt a handjob palace. The cops never claimed human trafficking, they just shut it down.

But the Jupiter PD are claiming they’ve busted this huge sex trafficking ring. They just haven’t charged anyone or given us a single shred of evidence that they’ve done anything other than embarrass some men. And based on what this libertarian feminist journalist who’s an expert on these things is telling us, it’ll be interesting to see if they ever do.