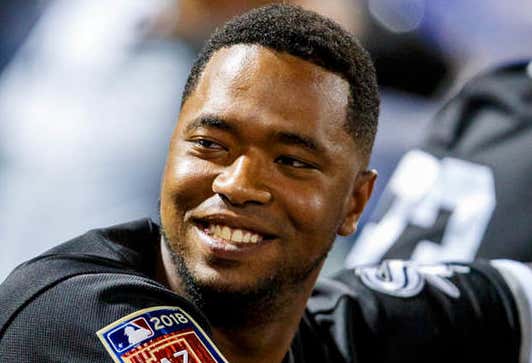 So as has been the case with the past few spring training, service time manipulation is a big topic of discussion.  Kris Bryant filed a grievance back in 2015 and spoke out about it again yesterday in an interview with The Athletic.

Now before we go into Eloy, here’s an explanation of service time with respect to Major League Baseball

– each MLB season is 187 days long, including off days

– players with more than 3 years of service time but less than 6 are eligible for arbitration.  After 6 years, they become a free agent.  But Eloy wouldn’t be eligible until 2025 if he were held down until about April 25th-ish this year.

So if you’re the White Sox: as it stands right now, you would be DUMB to start the season with Eloy Jimenez on the 25 man roster.  Same with Toronto and Vlad Jr.  It’s a rebuilding year (vomit) and 7 years of Eloy is obviously better than 6 years of him.

But the players fucking hate this rule.  I’m of the opinion that they should take it up with Tony Clark, the MLBPA head, and say “why in the fuck did you agree to this brutal bylaw for us” but to play devil’s advocate, I get it from the players side too.

The worst part of baseball as we look at it today is that teams are actively trying to lose.  It’s a proven method that tanking a few years can and should lead to sustained success, but baseball is better when teams are trying to win World Series every single year.

This is one reason I think we’re on a beeline for a strike in a few years.  That’s another blog for another time but actively losing sucks for fans, players and everyone else involved.

But back to Eloy: he’s without question ready to be inserted into the meat of the lineup as is, right now.  His bat is as polished as can be for a 21 year old.  But again, he won’t be because the White Sox will rightfully be manipulating his service time.

But the White Sox are also desperate for good PR.  We all know why, but they need a W in a big, big way right now.  So my proposition is this:

Extend Eloy.  Extend him right fucking now.  Buy out his arb years and insert him into the lineup on opening day.

If the White Sox are good at one thing, this is it.  Here are the contracts that Rick Hahn has gotten players to ink:

Now these deals at a glance seem like EXTREMELY team friendly deals.  Truth is, they are a win/win for both the player and the team.   The players make well above market “fuck you” money in years they’d be earning $550-600K, and the team gets to control them an extra year or two at the back end of the contract at (hopefully) an nicely under market rate.

And that is what I propose the White Sox do with him.  Now, I wouldn’t be shocked if the Sox haven’t tried this already.  I’m not sure if they have or haven’t and this is completely theoretical, but the Sox are desperate for the good PR, and I think this is a good way to get some.

Now what would that contract look like?  I’m guessing a bit more than what Chris Sale’s deal was in 2012.  Sale’s deal had an AAV of $6.5MM.  The White Sox (again, theoretically) want to control Eloy a full 7 years before he becomes a free agent and is gunning for a massive pay day.  So how about this:

7 years, $8MM/ year.  I just threw the $8MM out there because it’s a simple number for this exercise.  Could be 7, 7.5… you get the point.  Bryce Harper has earned about $52MM thus far in his career with bonuses, so it beats that as well.

Eloy’s health has been his biggest issue throughout the course of his career.  I can’t imagine he comes from any money at all, so why not take the guaranteed payday?

I think this would be a great way to get some good juju with both Eloy and the fans heading into opening day.  Get Eloy in the opening day lineup, fuck the service time rules and go from there.