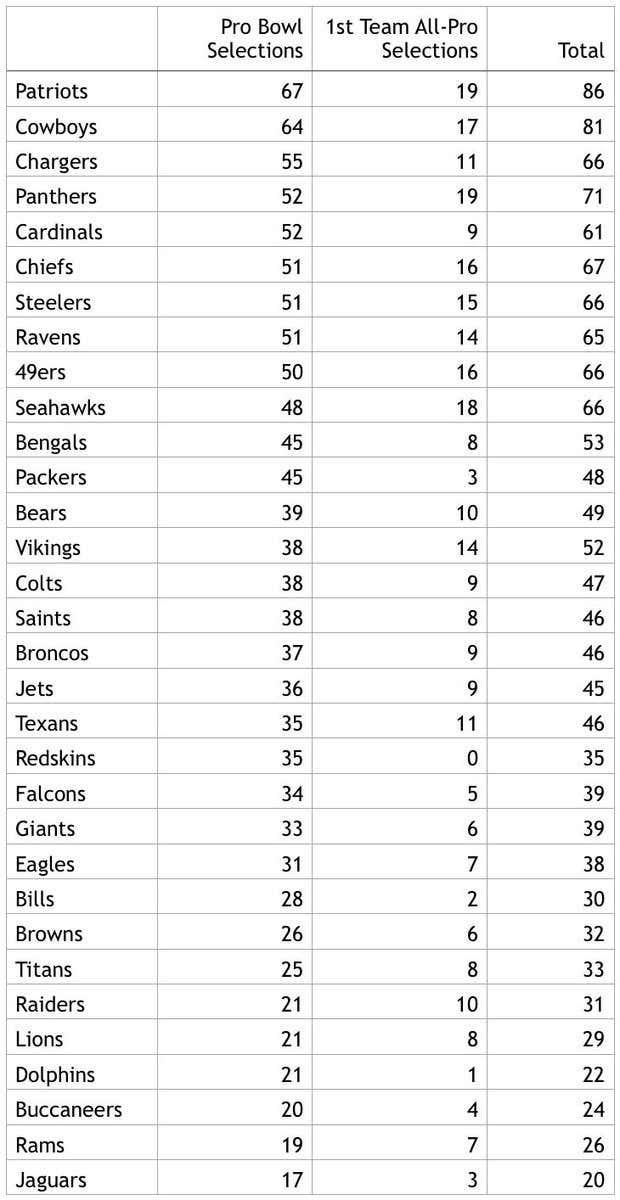 With the NFL Combine about to start Wednesday, it’s officially Draft Season. And with the 2019 Draft now just two months away, there’s no time to lose when it comes to one of my favorite aspects of this, one of my favorite parts of our annual trip around the sun. And that is reminding everyone that when it comes to this process, there is no organization in football as good at it as the Patriots are. No one else comes close.

Thanks to @DeeepThreat for doing the heavy lifting of quantifying this point and reducing it to handy chart form. And this chart speaks for itself. If your organizational philosophy is that the Draft process is all about finding diamonds among the dog shit, no team comes away with more Pro Bowlers and All Pros than New England does. If you’re more interested in building a solid team without decorated and awarded individual players, I offer you this list:

… That’s 15 names of players who never got Pro Bowl recognition from the league but have been building block players on multiple championship teams. And I’ll also add my own list of players they’ve drafted and then traded for a return:

These are facts. Proof positive that the Bill Belichick/Scott Pioli/Nick Caserio regime has done a better job with their college scouting and managing their draft board than any other organization. But I know even this incontrovertible evidence – or nine trips to the Super Bowl and six rings – won’t be enough to sway the popular opinion that they don’t know what they’re doing. That [clicks on the Cliche Generator App] Coach Belichick doesn’t get enough help from GM Belichick. Seriously, do a shot every time you hear that over the next couple of months and you’ll find yourself in  a church basement drinking coffee from an urn and introducing yourself to strangers.

There’s a concept in psychology called “The Illusory Truth Effect,” a glitch in the human psyche that equates repetition with truth. Joseph Goebbels is (dis)credited with calling it “The Big Lie.” Say something often enough and loud enough and no matter how untrue or even patently absurd it is, sooner or later you’ll wear people down and they’ll accept it as truth.

At some point, early on in the process, some of Belichick’s draft picks didn’t work out, and he was branded with this reputation of failure that is still getting repeated as truth. Maybe it goes back as far as his first pick in 2000, Adrian Klemm (OT, Hawaii, 46th overall), couldn’t stay healthy and the same old school writers who never wanted Belichick here in the first place and thought Mr. Kraft was an idiot for trading his 1st round pick for him: 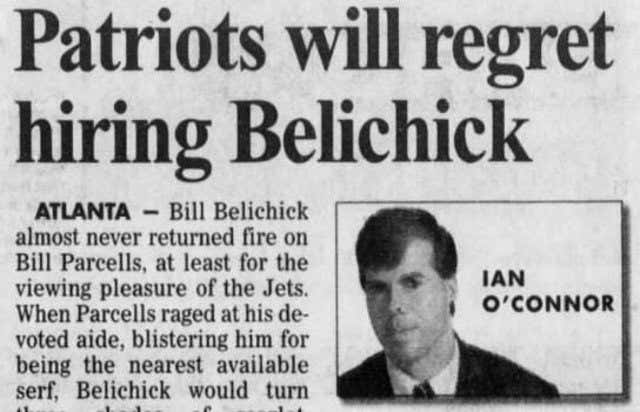 … and started banging into their Smith-Coronas this false narrative that Belichick didn’t know what he was doing that continues to this day. I mean, Christ, how many times have we heard Chad Jackson’s name brought up as proof he “can’t draft a wide receiver”? Even 13 years after the fact. And even though, dipshit though Jackson turned out to be, he was projected to go 14th overall on five of the six mocks I had in my hand that day and the Pats took a flyer on him with the 36th pick. But never mind that Belichick has pulled WR rabbits out of his ass like David Givens, Deion Branch, Malcolm Mitchell (tough break there) and a guy you may remember by the name of Julian Edelman. He still can’t change the minds of the haters.

And notwithstanding that unless they’ve made trades, the Pats have been drafting from the back end of the 1st round virtually ever season. Or not at all in the 1st round, thanks to the ridiculous over punishment on Spy- and Deflategate. And still managed to occupy 86 Pro Bowl spots and win Count Rugen’s fingers worth of rings.

That said, they now go into this draft not only with all the rookies from last year who ended up on IR coming back as redshirted freshman, but a league-leading 12 selections in this draft. Including SIX in the first 101 picks. All weapons in the hands of the most successful drafter of the 21st century. Look upon this and despair, rest of the NFL. #StillHere