There’s an internet influencer who goes by the name of QAnon, whose work, I have to confess, I’m not familiar with. But he’s been mentioned on Hard Factor and from all accounts has a track record for predicting events around the world with total accuracy and is pro-Trump, leaving everyone to believe he/she is close to the President. At the very least, works at the White House and is privy to insider information. And if you’re interested in knowing more, you can click this page of links to all of QAnon’s stuff on 8chan, which is unchartered territory for me. But be forewarned that the internet is dark and full of terrors.

I bring this up because Q seemed to have known about Mr. Kraft’s Tug Rule arrest before it was announced.

From a reader email:

At a high level, QANON is a person, or persons, very close with the POTUS, who continuously posts what is happening in all facets of the world, before they are happening. POTUS has verified this so many times… from pointing at Q shirts, to AF1 using “Q” as their call sign.

To not cross national security laws, Q often posts in code; initials of people, codewords for certain things, so that they can never actually break a law of exposing information. This is where it gets interesting.

On Feb 20th, Q made a post about some upcoming legal implications… and ended it with “Will make the Super Bowl look like a puppy show.” 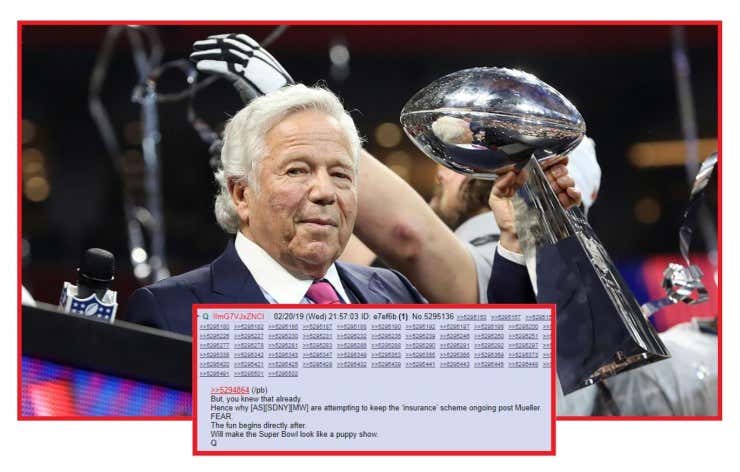 There are no coincidences with Q.

Apparently QAnon’s followers couldn’t decipher what the Super Bowl/Puppy show reference was all about. Then after the Jupiter Police announced the charges, they went back and connected the dots. And Q posted this reply: 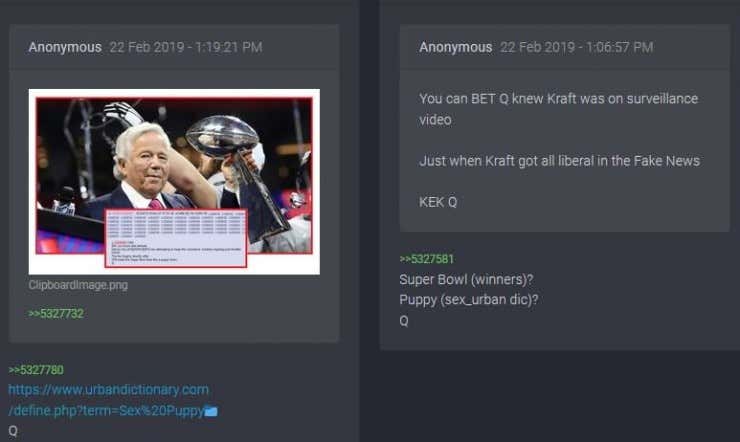 Sex Puppy – A very sexy person who does nothing all day but follow around his/her master in a sexual manner, always happy for intercourse (“doggie”)

So what does all this mean? I have no answers. I love a good conspiracy as much as the next guy. But mine run toward to the UFO Cover-up variety. I’m not good at these kind. But I’ve spent more time than I can to admit down the rabbit hole of 8chan, Twitter threads and sub-Reddits and the speculation is all over the map. Everything from a rift between Mr. Kraft and POTUS over the National Anthem controversy to really dark shit about international human trafficking. Your guess is as good as mine.

All I can say for sure is it has to be highly unusual for a local police department carrying out a sting on local Asian handjob palaces to contact well connected insiders in the federal government before they announce their findings. At least I think that’s the case. These are misdemeanor offenses. Committed by hundreds of thousands of guys every single day. A buddy of mine over the weekend said all his friends go to these places. And the professional etiquette is that, you get your 45 minute massage. At the end the woman taps you on the inside of your thigh. And if you want the Happy Ending you give Thumbs Up and she takes care of you. (Which is just another reminder I did not need that my life is dull.) Then you tip her. Easy peasy. Everyone goes away happy.

So why and how was QAnon tipped off? What were the investigators in Jupiter up to exactly? Not five years ago the cops in my town shut down a hand jibber massage parlor not two miles from my house and as far as I know, no one in the police department got in touch with anyone in the Obama administration ahead of time. But these are the weird times we are living in. And one of the strangest stories of all time just continues to get stranger. Damned if I know why.