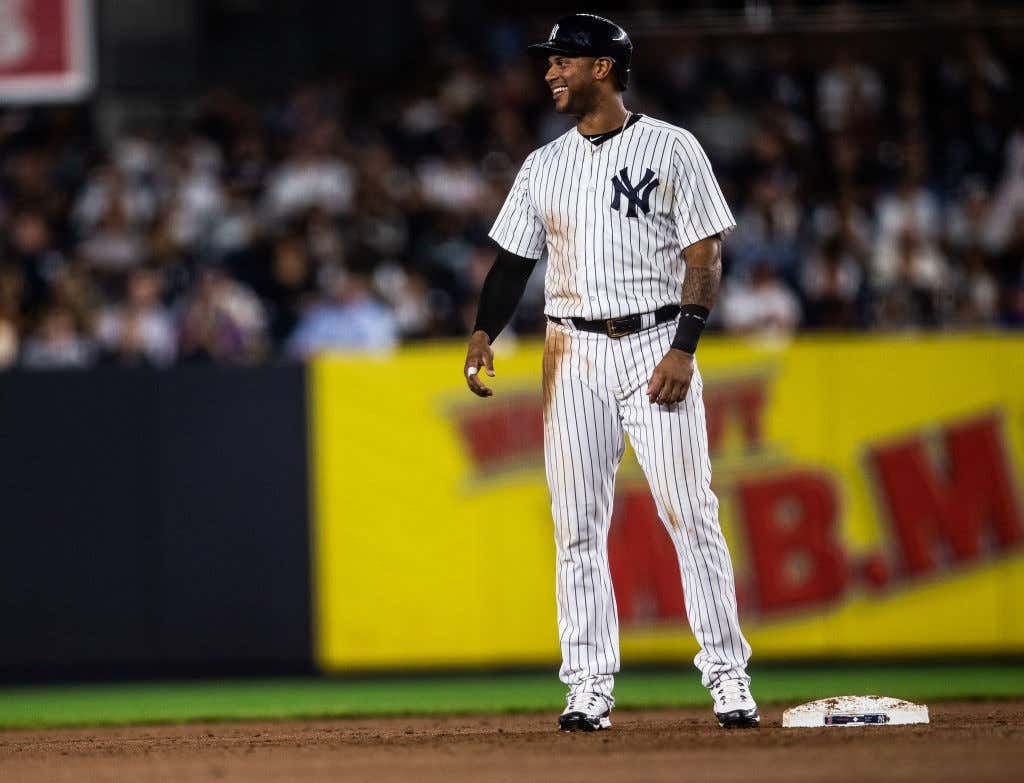 As a Yankees fan there is so much to love with this news of Aaron Hicks’ extension. It’s the definition of team friendly and player friendly deal. For Aaron Hicks’ side of things, the man just got a seven year extension, just a few years removed from being traded for John Ryan Murphy. Things were not looking so great for him back in 2015. Flash forward now and the man, a brand new father, has the job security he wanted. From the Yankees side, they just extended their future center fielder who puts up as good of numbers as just about any CF in the game today (not Trout). Hicks is a true 5 tool threat and is coming off of a career year in New York. He does everything well and is extremely undervalued. I love a few things aside from his baseball stats. Hicks pimps the shit out of home runs. He stares them down and I love that. He also plays a great center field and when he’s camped up a ball out there he almost looks bored. It’s very cocky and I’m a fan. He also has a rocket launcher for an arm. He’s on record with the fastest throw in major league history (STATCAST era) which was 105.5 mph.

If you don’t think Aaron Hicks is a good baseball player then we’re not watching the same game. He just finished off a career year in 2018 where he hit a career high 27 homers drove in 79 men, and had an OBP of .372. Most importantly, he played a career high 137 games. Durability is always key with Hicks since he’s prone to weird muscle pulls all the time. He switched up his diet after 2017 and it paid off big time. Let’s hope for more of the same with the good health because after Mike Trout, he’s right there with the rest of the pack of CFs including Starling Marte, Lorenzo Cain, Tommy Pham, Charlie Blackmon, and JBJ.

Let’s take a moment to deal with bumbling idiot.

Okay, everyone have a good laugh at how bad a take that was? Good, I’m glad we can all collectively move on now. The Mets would die for a player like Aaron Hicks with that deal. These are the same Mets paying 36 year old Robinson Cano $24 million for the next five years. Got it.

All jokes aside when you match up their deals, Harper is likely going to make out with $35 mill AAV while Hicks is at $10 mill. Their production really isn’t that far off from each other, and certainly nowhere near a $25 million difference. Now I’m not dumb, sticking Harper in Yankee Stadium in between Judge and Stanton would create a fucking monster, but I’m completely on board with giving Hicks this extension and using that money elsewhere. Where will that be?

It looks like Dellin Betances is next on the extension list. Great, get it done. But who is the big elephant in the room? Number 99. At some point you’re going to have to pay Aaron Judge and you’re going to have to give him all of the money. Not some, not a bargain, ALL OF IT. The guy made $600k last year for Christ’s sake. Giving smaller deals to Severino, Hicks, and eventually Betances and then Didi not far after that will set you up to pay Judge what he deserves.

I will say, this Hicks deal does make number one prospect Estevan Florial someone to look out for in the near future. With Judge locked in RF, Hicks in CF, and ideally Clint taking the big step this year in LF, that leaves Florial on the outside looking in. He’s probably not going to be ready for another year, which will make him expendable at the trade deadline for a big time ace. If you’re reading the tea leaves, that’s what this move means.

We’ll finish the blog with some nerdy numbers behind the value Hicks bring to the table. They aren’t end all be all numbers, but they show how underrated he is and why this is such a good move.

Brand new Short Porch out today. We covered the Machado deal, Voit’s bomb in Spring Training, Bird doing Spring Training Bird things, Stephen A Smith’s CC Sabathia rant, Syndergaard being an asshole, Hicks’ incredible quote about the upcoming year, and much more. Subscribe and listen just in time for a little baseball game at 1:00 with Judge and Stanton in the lineup and Big Maple on the bump.