Classic mix up here. Paint. Yogurt. Same difference. You know the classic Seinfeld bit about old people reaching an age where they no longer look when they back outta the driveway? Well same must go for the food they eat. Old people must get to a point where they just grab a tub and will eat whatever is inside, whether it’s edible or not doesn’t matter in the slightest. That old fella got a half a quart down before somebody was like, “Uhhh why are you eating the paint I used to make my bedroom more soothing?”

A half a quart! Who eats half a quart of yogurt anyway? Seems like a fuck ton of yogurt no? My stomach would need a month to recover from gulping down spoonfuls of that much yogurt and this guy did it with paint.

But guess what? He’s fine!

If you thought that old man was gonna get brought down by a half a quart of paint in his belly then you don’t know old people. Old people are tough as shit. Way tougher than anyone who is reading or writing this blog. We’ve been pampered by the internet and technology and the Food and Drug Administration. Everything we have ever eaten was run through a series of tests to make sure it’s safe. Our bodies wouldn’t be able to handle ingesting paint. We eat a half of a half of a half a quart of paint, our bodies shut down and we die a horrible painful death.

Not that old man. He lived through World War II. He lived through The Great Depression. There were times in his life where paint would’ve been the healthiest, most nutrient-rich thing he ate all month. And yeah, grandpa’s poop is gonna be mint chocolate chip-colored for the next couple of shits but he’s gonna be just fine. He’ll probably eat paint again but on purpose.

This is an all-time picture by the way 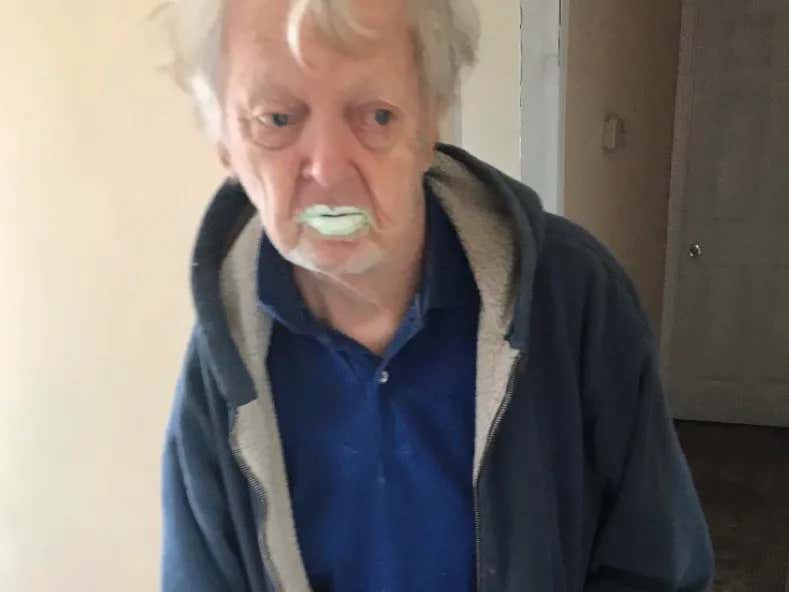 Maybe the most innocent, “I didn’t know it was paint……..” face a person can make. Some pictures will forever live in internet lore and that is one of them. Just an old dude who unknowingly ate a bunch of paint.