Stock Car racing takes a major step forward with the opening of its first superspeedway in Daytona Beach, Florida. A crowd of 41,921 sees inaugural running of the Daytona 500 at the newly minted 2.5-mile tri-oval track. A thrilling race ends without a clear winner, as Lee Petty and Johnny Beauchamp finishing in a photo that took three days to determine Petty crossed the finish line first.

Born out of the supped up cars used to run moonshine, NASCAR (National Association for Stock Car Auto Racing) was formed by Bill France Sr. in 1948. In the early days, racing was done where ever they could find space, including along the beach in Daytona. However, France wanted to create a track that would rival the Brickyard in Indianapolis and commissioned the first superspeedway to be built in Daytona. It took five years and the backing of major financial companies to complete Daytona International Speedway, but upon its completion, NASCAR was beginning to step out of the shadow and into the mainstream.

The land chosen for the new speedway was next to an airport after Bill France agreed to pay $10,000 a year for the next 50 years as part of his lease deal with the City of Daytona Beach.  France would still need financial backing to build the track of his dreams and got help from Pepsi and General Motors. Harley Earl, who took out a second mortgage and should stock shares to local residents to finance the project, designed the track, while Texas Oilman Clint Murchinson loaned out $600,000 and the construction equipment needed to complete the project.

The Daytona 500 featured 59 cars, including 20 convertibles, as Bob Welborn was the pole sitter at the start of the race. Welborn was the early front-runner but was knocked out with engine problems after 75 laps. Jack Smith and Tom Pistone each lead 57, but each had separate issues with their car. At the end of the race, which was completed without a caution it was Johnny Beauchamp and Lee Petty battling for the front. Petty grabbed the lead with three laps to go, but as they approached the finish line, he was side by side with Beauchamp. The checkered flag was waived, with both drivers claiming victory. 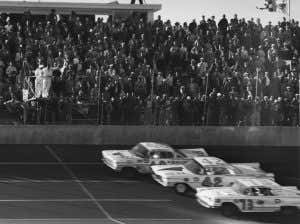 The finish was reviewed with photographs and newsreel footage, as it was difficult to determine who had actually won the race. Finally, after three days Bill France Sr. declared that Lee Petty had won the race, after reviewing all photographic evidence. The race’s dramatic conclusion only added an extra boost to the sport, helping to turn the Daytona 500 into the Great American Race. Lee Petty’s son Richard Petty had a less than special 57th place finish, after car troubles after the just eight laps, he would later dominate the event, winning the Daytona 500 a record seven times.