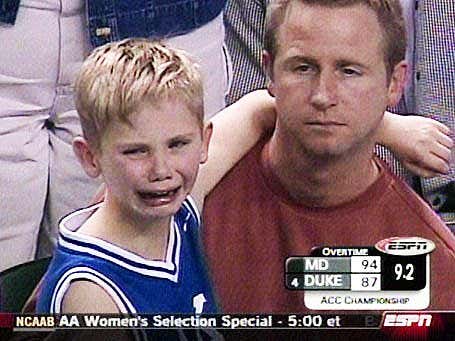 This happens to me a few times a year. I’ll see how excited the internet is about a big game like Duke/UNC last night and start to feel all sorts of jealousy. Like an addict wanting another hit of the good stuff, I know how good it feels to have one of those high energy, big spotlight college basketball games. Growing up, Maryland basketball was everything to me. Obviously I still love it, but growing up it was different. It was Cole Field House. It was Gary Williams. And it was the ACC.

If you’re my age or a bit older, you remember how fierce the Duke/Maryland rivalry was in the late 90’s/early 2000’s. When legends like Dixon and Blake went up against Battier and Williams. Games when the entire crowd would chant “Fuck you JJ” in unison when Redick was at the free throw line. Hating the guts out of guys like Greg Paulus and Jon Scheyer.

This was all before Twitter and all that, but the buzz was palpable. You knew the nation was tuning in to see Duke vs Maryland. It made you feel alive.

Even when we moved to Comcast and hired Turgeon, you couldn’t replace the energy or atmosphere of an ACC game. The crowd noise, the excitement, the buzz. The games were better and more intense, and you felt like you were part of something.

And then things happened. A bad chain of events, bad decisions from a bad athletic director, and the need for the college to make money and make it quick. The Big 10 came calling, Maryland answered, and here we are.

Look, the university is a business. Its goal is to make cash, and the Big 10 TV deal accomplishes just that. But at what cost? The big game excitement vs a team we hate is gone. The closest we have to that right now is vs Penn State football but I think everyone hates Penn State. There’s a semi-rivalry between us and Michigan State basketball sorta, but it’s like a 4/10 on the give a fuck scale.

At the end of the day, college athletics is a fickle business. I would give so much for the Terps to be able to turn back the clocks and come up with a better business plan besides “jump ship to the Big 10″. It was a a good move financially, but frustratingly annoyingly bad for most other reasons.

Last night was just one of those nights, reflecting on the Steve Blake steal, the national championship season, the John Gilchrist run through the ACC tournament, and so many more moments. I guess that’s what we refer to as the good ol’ days. I hope we one day feel that way again.