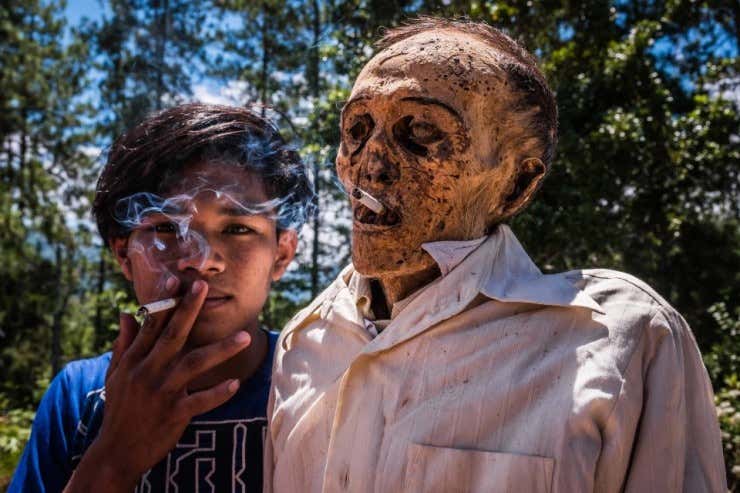 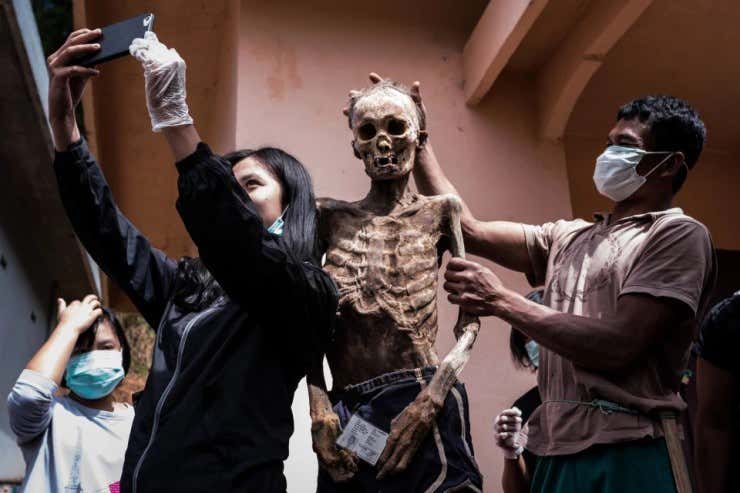 Source – CUDDLING up to Arel, her six year-old sister, Clara stares directly at the camera for a picture.

It has the makings of a sweet family mantelpiece portrait – however, one of the girls is dead.

In a mountainous area of Indonesia, the Toraja people mummify the bodies of the deceased and care for their preserved bodies as though they are still living.

There are around one million Torajan people, most of whom live in the South Sulawesi region, who believe that after death the soul remains in the house so the dead are treated to food, clothing, water, cigarettes.

Their skin and flesh are preserved from decaying and rotting – which begins within days of death – by a coating of a chemical solution called formalin, which is a mixture of formaldehyde and water.

For the community, a well-preserved body brings good fortune so family go to great lengths to ensure those who have died remain in the best possible shape.

[Author’s Note: There are other photos to be found in the link that I didn’t include. I’m not always sure where the line should be drawn, but I definitely draw it on this side of posting pictures of a little girl hugging the rotted corpse of her dead sister. Click away if that’s your thing. But be warned. You will never unsee that shit.]

I have to tip my hat to the Torajan people of Indonesia for the perfect solution that has plagued mankind since we came down out of the trees. For countless millennia we burned or buried them. Which is not only time consuming, it’s a ton of manual labor to build a pyre or dig a hole and then fill it in. A few hundred years ago, we started hiring someone to do all the work for us. But that’s a total ripoff. The casket alone costs thousands and you just know they take the clothes and valuables off the stiff once no one’s looking and sell them off because who’s going to ever check. And regardless you know you’re condemning a beloved relative to a final destination of being food for worms. Having a loved one drop dead is the worst. And not just because, you know, a loved one dropped dead.

So here’s the ideal way to handle it. Just keep them around. I’m sure it’s no bargain during the Putridity and Liquification stages of decomposition (I’m not into morbidity, I just heard Mulder use those terms on an X-Files not long ago). But once you get through those and all of grandma’s internal organs rot away, it’s a couple of layers of varnish and she’s good as new. Like restoring an old table that you can use to help your home decor.

I’m on record as saying I want a Kim Jong Il funeral, with people on all fours wailing uncontrollably in the streets for at least a weekend. Then I’ve wanted to be frozen in carbonite like Han Solo in Jabba’s lair. But those plans have changed. Today. Thanks to the Torajan. Just keep me around the house and my afterlife will be just fine.

Think about it. What’s one thing that everyone worries about, no matter how much they’ve come to grips with their own mortality? It’s being forgotten. Myself included. Well I don’t need my memory kept alive with photos or internet videos or my writing. Just throw a couple of coats of formalin on me and we’re good. The Irish Rose is pretty craftsy and I’ll proudly double as a decoration. Halloween, obviously. String some lights around me or dress me like a Dickensian Ghost of Christmas Past. At Easter she can go with a secular bunnies & eggs or religious motif. It’s dealer’s choice. I won’t care. I’ll just be happy I’m still around, with my well-preserved corpse providing good fortune for those I left behind. One could argue it’s more than I’m doing now. So thanks in advance, Torajan. You’ve not only saved my family a ton of money, you’ve made Future Dead Jerry very happy.