Daily Mail - Karl Lagerfeld’s heiress cat has paid tribute to her late companion, appearing behind a black veil, in a heartbreaking Instagram post.

Choupette – who Lagerfeld famously said he would marry – could be set to inherit his £150million fortune, but was today described as ‘simply heartbroken.’

The feline was Lagerfeld’s great love, flying with him on private jets, adorned in diamond necklaces and raking in millions as a ‘model’.

The Instagram post read: ‘Thank you everyone for your words of condolence. With a once cold but now simply broken heart, I am going into mourning.

‘I pray that your kind words and well-wishes will help me to put my best paw forward in my future without Daddy @KarlLagerfeld & as my own woman.’

Lagerfeld’s massive wealth could end up in the feline’s paws if certain legal structures are arranged, it has been claimed.

What’s funny is my whole life, all of my knowledge of the fashion world and fashion designers has come from exclusively two places: The Victoria’s Secret fashion show, and the movie Zoolander. And as it turns out, the movie Zoolander pretty much nailed how crazy fashion designers are. To be quite honest, I had never heard of this Karl Lagerfeld fella before his death earlier this week. The fashion world was shook, with all the models posting an IG story about him before getting back to business and selling more protein powder to pay the bills. But the more I read about him, the more I couldn’t stop drawing comparisons to my fashion hero, Mugatu.

I mean they are the same person! 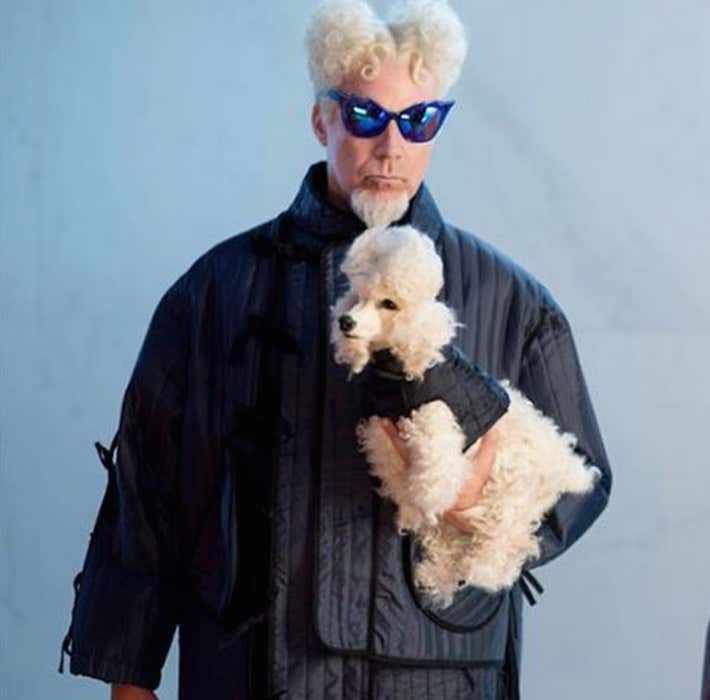 I mean how funny is it that one of the above pictures is from a movie, and one is a real life, non-ironically done photoshoot? Somehow the guy with the red sunglasses, the fingerless gloves, and the cat perched on his shoulders isn’t the fashion designer from a movie. That’s just real life. Somehow Mugatu is more normal than the real person. It’s incredible.

And when we say Lagerfeld loved his cat, well, he LOOOOOOVED his cat:

Originally belonging to French model Baptiste Giabiconi, Lagerfeld ‘met’ Choupette while house sitting for him in 2011.

After two weeks, Lagerfeld simply told Giabiconi: ‘I’m sorry but Choupette is mine,’ and would later joke that he abducted her before turning her into an international model.

This dude kidnapped his cat! He was watching it for a friend and fell in love with it. It’s Abducted In Plain Sight, but instead of a child, it was a cat. He just took the cat with him. And then it got even weirder…

Speaking of his desire to make their relationship ‘official’, Lagerfeld once said: ‘There is no marriage, yet, for human beings and animals… I never thought that I would fall in love like this with a cat.

‘I look a lot like her, we’re really like an old couple. In fact, she maintains it (my beard) for me, we sleep on the same pillow and she spends her life licking it.’

But behind the glamourous exterior, in one of Lagerfeld’s last interviews, he told Harper’s Bazaar, of their deep affection for each other.

He made a cartoon of himself proposing to his cat!

This dude dead ass wanted to marry his cat. He “fell in love” with it and wanted to put a ring on it. What sort of sentence is this? How is this a sentence that exists about a man and his cat- “In fact, she maintains it (my beard) for me, we sleep on the same pillow and she spends her life licking it.”

I’m not saying this dude banged his cat, but he might have played just the tip, just for a second, just to see how it feels.