What are you doinggggggg?!?! Slide on over, OJ and Nicole, because the above has to be the worst 5 seconds of a relationship of all time. My man smoked his girlfriend in the face with his elbow, caught the puck, AND THEN GAVE IT TO ANOTHER WOMAN!!!! If there was a course called “What Not To Do In A Relationship 101″, giving a puck that you caught to another woman would be rule 1. Right at the top. Before “put the toilet seat down” and “don’t call her fat” comes “don’t elbow her in the head before giving a puck you caught to a woman who isn’t sleeping with you”.

Now what does he do? Hopefully Landeskog sees this and sends that guy a care package to give to his girl to help him get out of the doghouse. I mean she was PISSSSSSEDDDDDD. 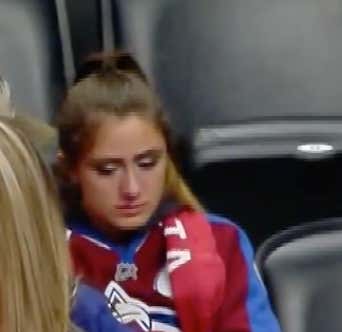 Even if she finds it in her heart to forgive him, this moment will be held over his head for the rest of his life. She has the trump card forever “Hun, will you empty the dishwasher?” “Remember the time you gave someone else that puck?” *He immediately starts putting the silverware away*

So good luck, our good man. And remember next time, don’t throw a ‘bow in your lady’s face and apologize by giving a puck to someone else.