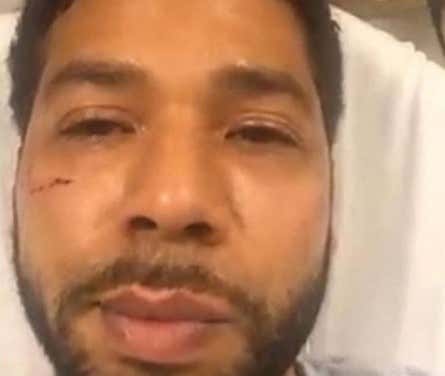 I can promise you the last thing I want to be talking about right now is Jussie Smollett. 3 weeks ago I had never heard of this guy. 3 weeks later I wish I hadn’t. This story refuses to go away and a lot of that has to do with how fucked up it is.

From the very beginning Smollett’s story sounded bizarre. A targeted hate crime in fancy pants capital of the world, Streeterville?

In the middle of the night? On one of the coldest days of the year? Against an allegedly notable actor? Coming home from SUBWAY?!

Then mix in all the side details like the noose and the bleach and the magazine-clipped follow up note and that’s where you really started losing people around here. The whole thing taken together just seemed absolutely fucking ridiculous. And for obvious reasons, the CPD had their doubts.

In the meantime, the national media had a field day with Smollett’s story. Anyone and everyone outside of Chicago was lining up to throw this guy a parade while dragging the 312/773 in the process.

This is where things go from weird to infuriating.  Katy Perry has one hundred and seven fucking million followers. That’s 107,000,000 accounts on the receiving end of some very lackluster detective work and 107 million opportunities to drag Chicago as a MAGA Country Hate Factory™. It’s complete and total bullshit.

“It’s not necessarily that you don’t believe this is the truth. You don’t even want to see the truth”

Obviously there’s no room for hate in this world, but there’s also no room for dirty rotten liars.

CPD Superintendent aka the #1 Chicago Cop Eddie Johnson lit up the media today with a level of shame I have not seen before in my life. It made the 2007 Dennis Green presser look like a picnic in comparison. Not from the standpoint of getting pissed and yelling but really more from the dreaded I’m Not Mad I’m Disappointed standpoint.

And that’s where this really hits for me and every other regular person in Chicago. The coverage on this story has been unfucking believable. Like I said when I started I had no idea who Jussie Smollett was 3 weeks ago and in a perfect world that would still be the case. We will never get the time this consumed back. That alone should be depressing enough.

Making matters worse tho – we’re at major crossroads in Chicago with the biggest election in 30 years next week. We have globally embarrassing levels of gun violence. Negative population trends. Underfunded pensions and BILLIONS in debt. Corruption runs rampant in city hall with literally no end in sight and not for nothing the White Sox just missed out on Machado while the Bulls marinate in endless disappointment.

There’s more impactful stuff going on than ever before and instead of talking about it, we’re loading up on Jussie Smollet’s crock of shit investigation because he’s the guy from that one show.

Fortunately the Boys In Blue got to the bottom of all this and even more lucky, Eddie Johnson has the stones to stand up and call everybody out in the process. I can’t imagine how good that must feel after literally every single week getting blasted by headlines for not doing your job. Turning that back on a room full of reporters who spend all day taking shots at you has to be a top 5 feeling in the world for Eddie.

From here, fingers crossed Jussie Smollett doesn’t work a day in his life in Chicago again.