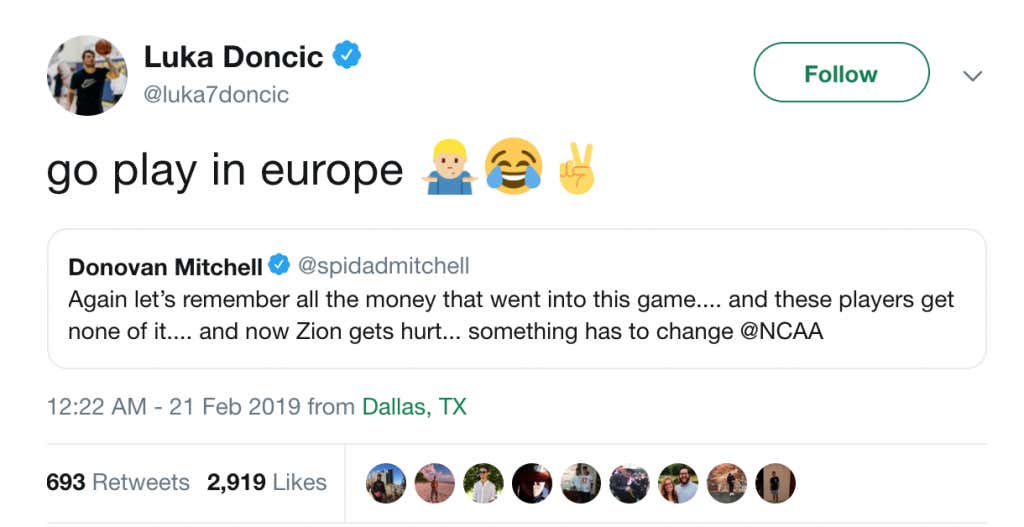 Tonight has been a HUGE night for the “college athletes should be paid!” crowd in response to Zion Williamson spraining his knee. People posting Seat Geek screenshots about how expensive the game was just to see Zion only for him to not make a penny off the game, Rovell tweeting numbers and other nerd shit about the amount of revenue lost for the popcorn venders at UNC when these two square off again due to Zion’s likely absence, everyone talking about the same old shit about college athletes not getting paid. BORRRRRIIIIINGGGGGG.

Thankfully our new lord and savior Luka is here to offer an alternative I’m shocked more athletes didn’t try to take advantage of over the years. Go to Europe, get that bag, play against grown men, and come back the next year. It clearly worked for Luka, a guy who spent years playing professionally overseas. I don’t know if he’s ever even heard of school but it appears to have worked out for the best. It kinda sorta worked for Brandon Jennings depending on how you want to evaluate Brandon Jennings’ career. It did not work for Jeremy Tyler. Not even a little bit. I don’t really care about the efficiency of this plan to be completely honest with you. I don’t care for Round 3857 of the “college athletes should be paid” debate, either. I just like that Luka is here talking shit about college basketball halfway through his rookie campaign. “Come to Death Row” – Luka Doncic.