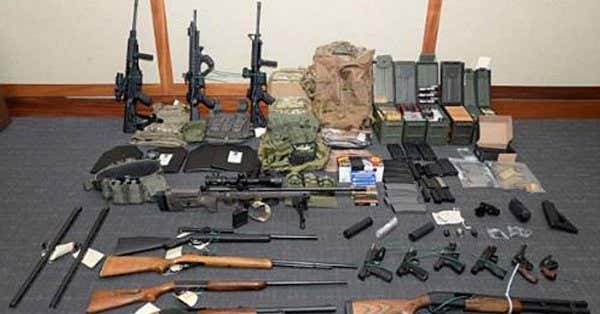 A Coast Guard lieutenant assigned to the service’s headquarters in Washington, D.C., has been arrested on drug and gun possession charges, and is accused of plans to “murder innocent civilians on a scale rarely seen in this country,” according to documents filed in Maryland District Court.

Lt. Christopher Paul Hasson, an acquisitions officer for the National Security Cutter Acquisition Program, was arrested Feb. 15 and charged with possession of a firearm and ammunition by an unlawful user or addict of controlled substances, and possession of Tramadol, a Schedule IV pain medication.

The documents were first unearthed by Seamus Hughes of The Program on Extremism at George Washington University, and shared with Military.com.

“The current charges, however, are the proverbial tip of the iceberg,” Hur wrote. “The defendant is a domestic terrorist, bent on committing acts dangerous to human life that are intended to affect government conduct.”

Hur cited a draft email written by Hasson in June 2017 in which he said he was “dreaming of a way to kill almost every last person on the earth” using a “Spanish flu, botulism, anthrax” or some other mass toxin.

Another draft letter to a “known American neo-Nazi leader” identified Hasson as a white nationalist looking for an opportunity for “a little focused violence” to establish racial supremacy.

When Hasson was arrested in Silver Spring, Maryland, earlier this month, the document states, law enforcement agents found 15 firearms, including shotguns, rifles and handguns, and “conservatively, over 1,000 rounds of mixed ammunition.”

WHEW. Apparently, this dude has ties to the Marine Corps and the Army National Guard as well. So, congrats to the Air Force and Navy for never having the stink of this piece of shit on your uniform.

How does one have the ideas in their brain that they want to kill massive amounts of people with biological weapons while still going about their day-to-day activities? He was an Lt in the Coast Guard so you’d think that he’d have some responsibilities on a daily basis. You cant just hole yourself up thinking about all the people you want to kill.

That fact makes stories like these all the scarier. One minute, he’s telling your platoon sergeant what time PT starts, the next minute he’s emailing fucking Nazis and asking how to get airborne botulism to kill the masses.

If you’re interested in the specifics, here’s some light reading about a domestic terrorist whose plot was foiled and will now spend the rest of his life in jail.