The Blackhawks played the Jackets on 2/16

Then as you can see above the Blackhawks sent two more scouts to watch the Jackets play again vs Montreal.

Hmm…who could they be looking at?

If I am being honest…I highly doubt this is about Panarin. They know Panarin. Panarin knows them. Panarin loves Kane, but when he was asked if a Patrick Kane recruiting call would sway him he bluntly said “No”. Panarin signed a bit of a sweetheart deal to stay in Chicago last time. Stan promptly traded him. Like I’ve said here before, I was told by someone in the Jackets organization that Panarin was still pissed at Stan for that. My heart says YES, my brain says yes, my balls say no.

So if they’re not getting looks at Panarin then who exactly are they scouting at the NHL level?

Keep in mind that I have ZERO sources. Something about how I’ve been selling Bowman clown shirts. Stan has said recently that he wants to return to an elite level in the next 18-24 months. While I am DISGUSTED by his lack of urgency while Toews, Kane, Keith, and Crawford continue to age, that is the only real clue we have to work with so we need to view any trade through that prism. Only two Blue Jackets really meet that criteria and are theoretically realistic trade targets.

Well here you go, internet. Here is a defenseman that would make sense.

Murray got hurt against Tampa Bay the other night, but it doesn’t sound too serious. Not serious enough to block a trade anyways. Murray was the #2 overall pick back in 2012 and it’s safe to say the Jackets have been dissatisfied with him so far. He is having his best season of his career and is back to playing top 4 minutes for CBJ, but he’s a pending RFA and the Jackets have committed long-term to Seth Jones, David Savard, and Markus Nutivaara. They’ll obviously lock up Zach Werenski as soon as possible too. That’s four defensemen right there so even though Murray seems to have figured it out, he’s no longer a building block of the Jackets. He’s an extra piece. A luxury. The Blue Jackets should have PLENTY of money to re-sign him because Panarin and Bob are coming off the books, but if you don’t see him as a lock for your top 4 then the time to trade him is now when his value likely has never been higher.

Maybe this is where the Blackhawks step in with an offer. A similar line of thinking to the Dylan Strome trade. Get a guy with loads of talent and hope he figures it out and becomes what everyone believed him to be when he was drafted. I will ALWAYS make Tony Romo noises about a guy like Murray. MAYYYYYBBBEEEEEEE he puts it all together. He’s got all the tools. He can skate. He’s been a PP guy at times. Good size at 6ft and over 200lbs.

The Jackets are reportedly still interested in Anisimov. Maybe Anisimov and some sort of sweetener for Murray. Then Murray gets penciled into the left-side of the defense with Duncan Keith for this year and hopefully beyond at a reasonable price because he is still an RFA. Watch this video and think of the 2012 prospect, not the guy who has floundered a bit in the NHL

BUT…Murray didn’t make the trip to Montreal and the Hawks still had two scouts at the game so maybe they’re looking at other guys too. 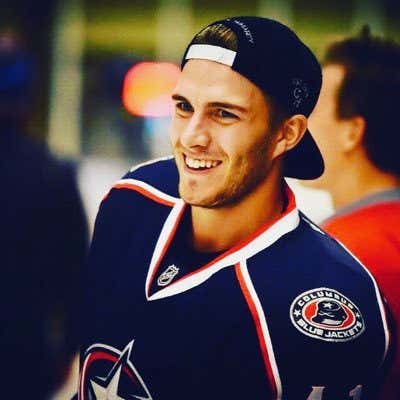 The Jackets signed Wennberg to a pretty big deal after 2016-17 when it was looking like he’d develop into a sure-fire top 6 center. Well… he’s regressed a bit since then. This year he only has 2 goals and 21 assists through and his number 1 highlight on YouTube is when Tom Wilson tried to kill him

So here is why you get a guy like Wennberg if you’re the Blackhawks…because you already believe in your top 6 for the most part. If you go:

That’s a pretty balanced top 9. Wennberg is a good defensive player and he’s been getting better at the dot too. Almost at 50% this year. He’d be an upgrade long term over Anisimov and Kampf. He can really skate and play at the pace the Blackhawks want to play. The Blackhawks will be in a position to clear additional cap space with Ward, Kruger, and Kunitz coming off the books this summer. That’s enough to cover Wennberg’s cap hit right there and the Hawks can use the additional money cleared from the cap going up, Anisimov being dealt, and the money they already have banked and put that towards Strome and Debrincat. It’s not the route I’d go, but there’s logic behind going after Wennberg. It’s a bit of a reclamation project, again, and that’s a risk when that project carries a $4.9M cap hit, but if you’re looking at the landscape and don’t think you’re likely to end up with Panarin, Stone, or Duchene then Wennberg certainly helps your depth.

I want Panarin as much as the next guy, but it feels like a long shot at this point. We do know what Stan is comfortable dealing with Jarmo and the Hawks have been committing resources to CBJ games. If not Panarin, then these two guys make some sense even if it’s not sexy. The next 5 days are going to be INTENSE. Both the Blackhawks and Jackets are wild cards at the deadline who could go in a ton of different directions. John has said he wants to make the playoffs. John gets what John wants. That makes me think the Blackhawks will add something that can help them down the stretch, but also for a few years down the road.

See everyone at Declans on Friday for the Avs game. 6:30pm, BE THERE. #JoinOrDie