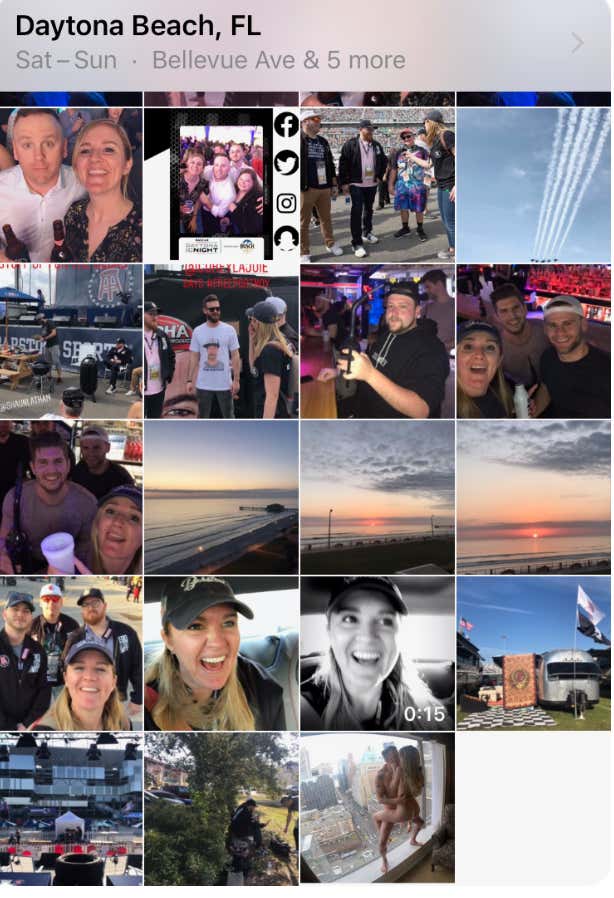 Whenever something interesting catches my eye but I’m not in a location where I can blog or post, I take a screenshot of it & plan to get to it as soon as I’m able. In some cases I forget & wind up hoarding strange things in my albums until further review.

Today while flipping through photos from the Daytona 500 I found a good example of that as I noticed the final photograph I’d taken on Sunday (bottom right photo above)..

Barstool stuff, Barstool stuff, Daytona stuff, Daytona stuff, race day stuff, race day stuff, annnnnd comedian Steve-O naked with his fiancé/artist, Lux Wright, in a Vancouver window. Totally normal thing to have screen-shotted(?) that to my albums, in what was probably an extremely buzzed scroll session while in line for a hot dog at the track. Not weird at all.

So now, a whole 4 days after the photo was captured, I’m thinking of what we learned at blogger school RE: ‘relevancy & timing’, and am choosing to believe it’s still fresh since I just rediscovered it.

Here’s some details no one asked for:

Comedian Jim Jeffries claims to have taken the photo.

And comedian Marlon Wayans claims to have already been there & done that.

Steve-O & Wright were in Vancouver for his Bucket List Tour; a mix of standup, story-telling, & clips of his favorite stunts, and dates go through October 2019. It’s received good reviews & apparently he’s great about meeting fans, so if you’re a huge Jackass person that show might be for you.

Wright is a photographer, stylist, and visual artist for films, commercials, and stills, and seems like a pretty cool lady… They seem very into each other & very not into clothes & I sound like a cornball but for some weird reason it makes me happy to see Steve-O happy??

Here’s some more from her Insta:

Also, before I posted about this I checked to make sure it hadn’t been blogged by someone else & wound up with a friendly reminder in case you were confusing him for the other Steve O: