It’s Week 7 and Colton and his ladies are headed back to the states to his hometown of Denver, Colorado. Last night’s episode was extremely frustrating. At this point I think the producers knew they had nothing with these final girls and decided to just pit everyone against each other. We had name calling and “opinions” flying around left and right. A bunch of sweet girls who all get along towards the end? Clearly that is far too boring.

We started with a vlog right off the bat. Colton said that he really trusts Katie, so Katie telling him to look out for some of the girls was not sitting well with him.

Before we saw all the women in Denver, Colton met up with Ben “Good Guy” Higgins to get some clarity from a past Bachelor. I’m happy to report that my love for Ben Higgins is still going strong. He seems like he would be a stellar therapist. He hit Colton with a “and how do you feel about that” and I swooned.

The women all met up with Colton for about two seconds before he grabbed Tayshia for their one on one date. And we got an appearance from Colton’s dog. A major win.

Yes, their date was extremely boring. But also it was the most realistic. They spent a day checking out Denver, shopping, eating, drinking, and then went back to his place to make dinner and make out. They had their most important conversation in the loudest restaurant? market? It was humming and we could barely hear Tayshia tattle on Cassie and Caelynn. It obviously was coming, Tayshia is entitled to her opinions, and Colton POINT BLANK asked her for her opinion. You can’t really get mad at Tayshia for telling Colton what she thinks when that’s exactly what he asked her to do. She claimed that Cassie and Caelynn are not there for the right reasons, they’re looking toward their future in the spotlight, and they wouldn’t be ready to be engaged at the end of the show. They’ve also talked about being the next bachelorette. These are obviously HUGE red flags for the show. For real life? It’s pretty normal. I think if I was on the show I would absolutely gossip with my girlfriends in the house about who would be the next bachelorette. They literally have nothing else to talk about. Not being ready to get engaged at the end of a reality tv show? Makes sense. It’s happened on the show before. Colton is so gung-ho about getting engaged at the end of the show he makes it seem like the girls not being ready is a bad thing when realistically, it’s pretty fucking normal. So is it really that bad that Cassie and Caelynn maybe said these things? I don’t think so. But on this show, the women totally lose the outside world and are fully in Bachelor world. If Caelynn and Cassie said they weren’t ready to get engaged they might as well have admitted to murder at this point. Tayshia and Kirpa really just think they are helping Colton. He has made it very, very, very clear that “his greatest fear” is that the woman he picks isn’t ready. Well buckle up Colton. You’re dating a bunch of 23 year olds.

Tayshia received a rose, which means they’re headed to her hometown. Then they ended their evening making out in his bedroom. I’m not going to lie, I chuckled at Colton bringing her into the room and saying, “this is where the magic doesn’t happen!” Poor guy just wants to get laid.

Tayshia wore an Underwood football jersey into his bedroom and I’m surprised Colton didn’t bust on the spot.

The second one on one date went to Caelynn, and damn this chick is fired up. She clearly had some idea that Tayshia would throw her and Cassie under the bus and she came into the date on the defense. I can’t imagine Caelynn watched this back and wasn’t a little disappointed in how she acted. She has taken the high road on many occasions this season (everything with Hannah B.) but somehow she couldn’t resist calling Tayshia a stupid bitch. Don’t get me wrong, I like seeing Caelynn fight for what she wants. I felt like the pageant girl exterior was shedding a little bit…but the name calling I could have done without.

During the evening portion of their date, Caelynn actually looked super nervous. I’m sure it was a mix of being very cold, but she was basically shaking out of her chair the entire time. However Caelynn was able to convince Colton that she is falling for him and she is there to get married. She locked in a hometown rose. They finished their night with maybe the coolest thing the Bachelor has done during a one on one. A private concert at Red Rocks with Brett Young. Fill the quota for a cheesy, country love song but in such a cool setting.

The last one on one went to Hannah B. who has been dying for some alone time with Colton. He brought her to meet his family and her confidence was probably sky high. No one else has met his parents and Hannah B. probably thought she was locked in.

I think we got a glimpse into Colton’s future with his dad and we all liked what we saw. What a t-shirt on that man. Colton got to talk to his parents and give them an update on where he is at. Then Hannah B. put on her best Runway Barbie dress and they had their dinner date in a giant airplane hanger. As soon as she started talking it was clear from Colton’s face that this was the end for her. 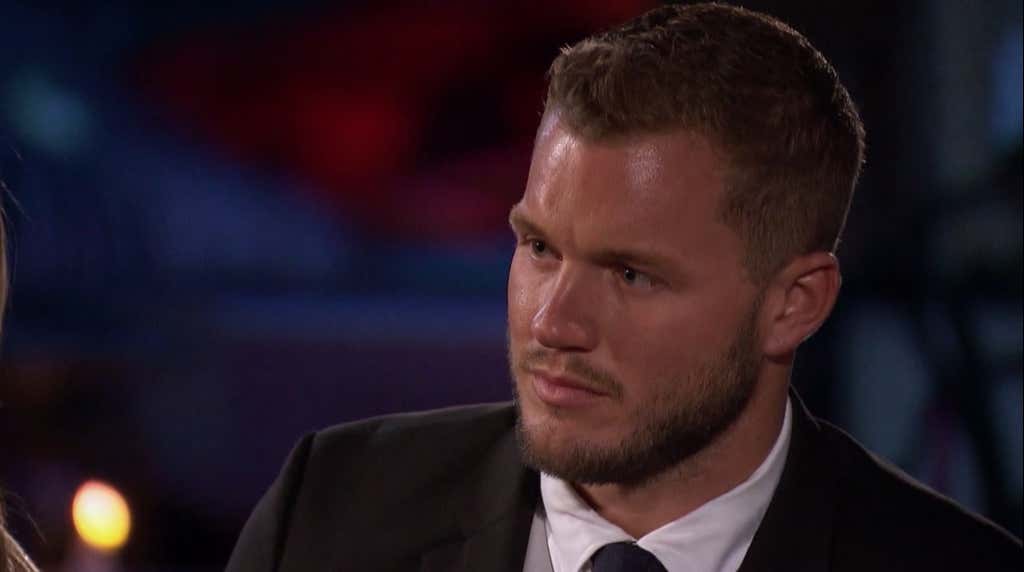 Colton escorted Hannah B. to her black limo (not a suburban!) and shocker! She also left him with the message to be careful with the other girls. “Listen to people about things…and people’s intentions” – Hannah B. as she bids Colton farewell. It was pretty clear that the connection was not there with Colton and Hannah B. so it wasn’t surprising to see her go home. I appreciate ABC giving us the luggage guy even though there wasn’t a 2 on 1 this season. Look at that side eye. BTW, @ABC give Trent a chance. All he wants is to be the luggage guy and I think he’s paid his dues.

The remaining women (Cassie, Kirpa, Hannah G., and Heather) went on the group date to fight for the last two roses to get to hometowns. It cracks me up that Heather was not mentioned in the “women not ready for marriage” category. Before you settle down, go kiss some more guys, Heather, please. Also hilarious that she just sent herself home and no one really batted an eye. Not even Colton. You know Colton was sending her home anyway, so when she did it herself he was just like, “Okay have a nice life!” Heather managed to make it to Week 7, get her first kiss, travel to beautiful foreign places, and have a pretty painless exit. Is Heather really the winner of this show? She jumped onto that train with a one way ticket back to the real world.

At this point in the season, these girls have spent SOOO much alone time together. It’s impossible that things aren’t going to get a little hostile. Kirpa talked to Colton about Cassie and Caelynn, also because he directly asked her. I feel like Kirpa is Colton’s best gal pal that he has just brought along for the ride. Like there is zero actual chemistry between them but they’ve become friends and he trusts her.

Everyone went into full mean girl mode. Tayshia tried to bury Cassie and Caelynn. Kirpa joined in. Caelynn started using curse words. We got some real tude from Cassie. They lost their sense of reality. Colton couldn’t make a decision about the final roses so they went into the night with three girls and two roses left. He immediately gave Hannah G. a rose which was super awkward and funny at the same time. Hannah G. just floated in and out of that room with her rose and then poof! she was gone. No one has stayed out of the drama like Hannah G. It might be because we’ve heard her say 10 words this entire season.

Caelynn also just came out of nowhere and swooped into the date to reiterate to Colton that the rumors about Cassie were not true. It was an effort to save her friend from getting sent home. I guess I can respect that? The whole Cassie and Caelynn alliance weirds me out a little, like you’re still trying to marry the same guy. Would it be better or worse for your friendship if you were the top two? Seems odd. Cassie got the last rose, sending Kirpa home.

I could not be less confident in any of these relationships.

This is normally around the time that ABC gets me and I start to believe that some of the relationships could actually work in the real world. I have absolutely zero confidence in this happening with any of these girls. That was the problem when Colton was picked to be the Bachelor in the first place. No one could see him actually getting engaged at the end of the show…and that seems to be the biggest issue through the season. We have maybe the most predictable top 4 ever. Tayshia, Caelynn, Cassie, and Hannah G. are now taking Colton to meet their families.

I also have no doubt in my mind that ABC wanted Tayshia and Kirpa to turn against Cassie and Caelynn. It’s crazy to me that grown women take this show so seriously that they feel the need to go and bash these girls on their personal Instagrams.

We watch this show and make fun of the girls but at the end of the day it is reality TV. We don’t see everything that happens. Colton said they aren’t characters, but honestly with the way the show is edited sometimes, these girls get cast in a certain light which is different from who they are in real life. Of course we all have our opinions on the girls. Do we need to go trash them on their personal social media? Probably not. Why someone would feel the need to go to Kirpa’s Instagram to post “You’re a literal dumpster” is beyond me.

There is now more anticipation for this fence jump than there is for Colton to have sex.