Every so often a business decision goes so horribly, horribly wrong that you know it’s going to be fodder for business journals and taught in Management seminars for generations. Edison putting his money into DC current for homes instead of AC current. 20th Century Fox signing away all the merchandising rights to Star Wars to George Lucas for $20,000. Blockbuster’s decision not to buy out Netflix for like $50 million. Mars candy refusing to let Steven Spielberg use M&Ms in E.T. New Coke. Dunder-Mifflin Infinity. The Michael Scott Paper Company. The Sabre Pyramid. 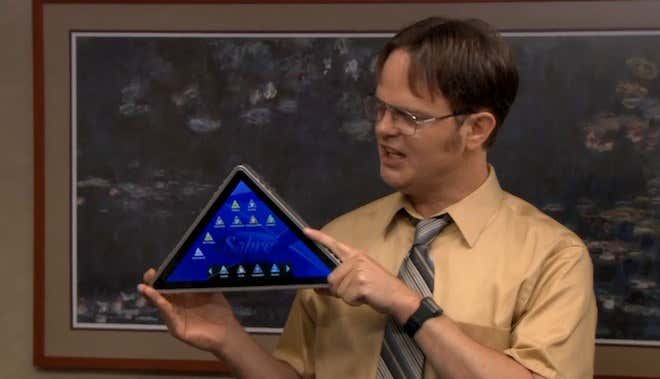 And as Hubbs mentioned earlier, the Alliance of American Football looks like it’s well on its way to joining that list.

Source – The Alliance of American Football isn’t even three weeks old, and it has already sold to Tom Dundon for $250 million.

According to Darren Rovell Tuesday morning, Dundon invested $250 million in the league. Rovell said the AAF “essentially sold off the entire league” with this move. This comes right after it was reported by The Athletic that the AAF was already struggling financially, according to Sporting News.

Just how bad are the finances right now? Rovell also reported that payroll was missed in week one.

And this is not only two weeks into their first season, this is one week after the AAF’s ratings beat the NBA in prime time. And how did they do in Week 2? At the moment, nobody knows. They haven’t released them. Which is not a good sign.

I don’t pretend to be a businessman. The last capital venture I engaged in was a yard sale of most of my kid’s baby stuff that drew about 10 couples in their 70s, grossed about $30 and barely covered the gas it cost me to shuttle all the unsold toys and furniture to the dump. So what do I know? But it seems to me that when your business model consists of “If our TV ratings are good in the first week, then all we’ll need is to skip payroll and get an investor to buy us out for a quarter of a billion dollars. Easy peasy,” then you’re not doing it right.

And frankly, as much as I love football, I just think a rival league doesn’t work. It hasn’t worked since the AFL scared the NFL enough to merge with them in the 1960s. And I don’t think it will ever work. I’m speaking just for myself but I think I’m not alone when I say one of the great things about football is that it has a limited season that begins and ends on time. After 17 weeks and a month of playoffs, I’m ready for it to end. And to begin the process of prepping for America’s second favorite sport: The NFL offseason. By February I don’t find myself clamoring for a new season to start up, only this one with a bunch of no-namers trying to create new storylines. I simply don’t. I’m too wired into the NFL calendar, free agency and the Combine and the Draft to start all over again with a new league.

I felt the same way about youth football as opposed to every other sport. Practices begin the week before school starts and the Super Bowls are in early November and then you move on. No part of me ever wanted to be my Hockey Dad friends who went from the season to a travel team followed by camps and then captain’s practices for the new season with no break in between. And that’s exactly what the AAF feels like to me.

If the AAF makes it, great. It’s no skin off my taint. And maybe, eventually, it’ll give me a reason to be interested. I’m just betting against it. And I can’t believe a guy with enough business savvy to be able to buy an NHL franchise would think it’s worth a $250 million gamble. Unless he needs the write off or something. And I think it’s even more insane when you consider the XFL – famous for producing the single lowest rated prime time show in network TV history – is starting up again too. I’d rather put my money into a social network that is also a virtual paper store.