The cop cars got to the scene of a home break-in at about the same time as a homeless man’s Lyft getaway car, police said, according to NJ.com

And when 28-year-old Nicholas Maziot jumped from a second-floor window to escape the home, he got in his “getaway car” — or so he thought, News12 reported. But it wasn’t his Lyft driver who would be taking him away from the scene. Rather, he mistook a police car for his Lyft, police said, according to the station.

Once inside the wrong car, an officer was able to arrest Maziot on suspicion of burglary, a Rochelle Park Police Department detective said, according to the North Jersey record.

“Busy night for our department,” the department posted to Facebook on Feb. 15, along with a DailyVoice story about the Lyft and police car mix-up.

I’m not well in tune with how to rob a house or a bank, but I do know one thing for certain….don’t use a police car as your getaway vehicle. In fact, use just about anything besides that. ANYTHING. This guy from Jersey thought he was getting into his Lyft car to flee the scene, but actually found his way into an undercover car. I guess he didn’t check the license plate from the app because he just assumed it was his ride. IDIOT!

Also, why are people now using Uber and Lyft as getaway cars? How stupid do you have to be? White Sox Dave wrote about a similar story last week with a guy and a Lyft ride. 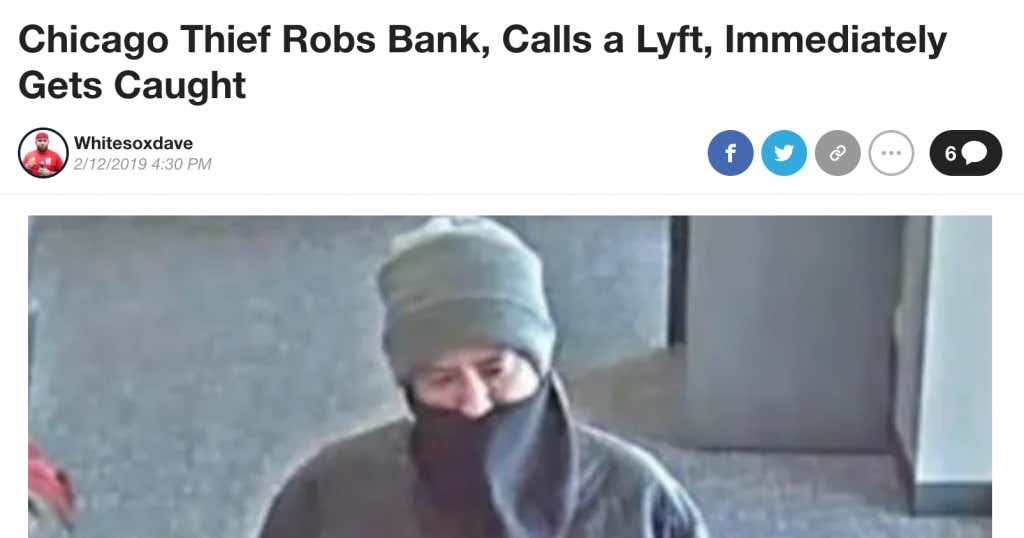 I cannot think of a worse idea. Unless the driver is a complete buffoon, he’s going to pick up on the fact that you just robbed a bank or a home. Only a pro is going to be calm following a robbery. A pro burglar also wouldn’t be calling a car service to escape the scene of the crime. If it’s your first time you’re probably going to be freaking out and alarm the driver.

Bottomline, if you use Uber or Lyft as a getaway car you deserve to get caught. If you get in an undercover police car you also deserve to be caught.