So as most people know Dave Portnoy from Barstool Sports went to the Daytona 500 yesterday. And by all accounts he had a great time. According to sources close to him it wasn’t just because he got to chop it up with fellow Superbowl MVP Julien Edelman before the race.

It wasn’t just because Nascar put him on the jumbotron

It wasn’t just because Nascar had him ride in the pace care with Dale Earnhardt Jr.

Nope according to sources familiar with the situation he had so much fun that allegedly he already said he wants to go to Talledega and Bristol next. It’s a huge win for the sport of Nascar and makes the bigwigs who hired him look like a marketing genius. After all the the proof is in the pudding. The Daytona ratings were up 8% with the head of Fox saying they saw a huge spike in growth markets like Boston which is where Dave Portnoy is king. 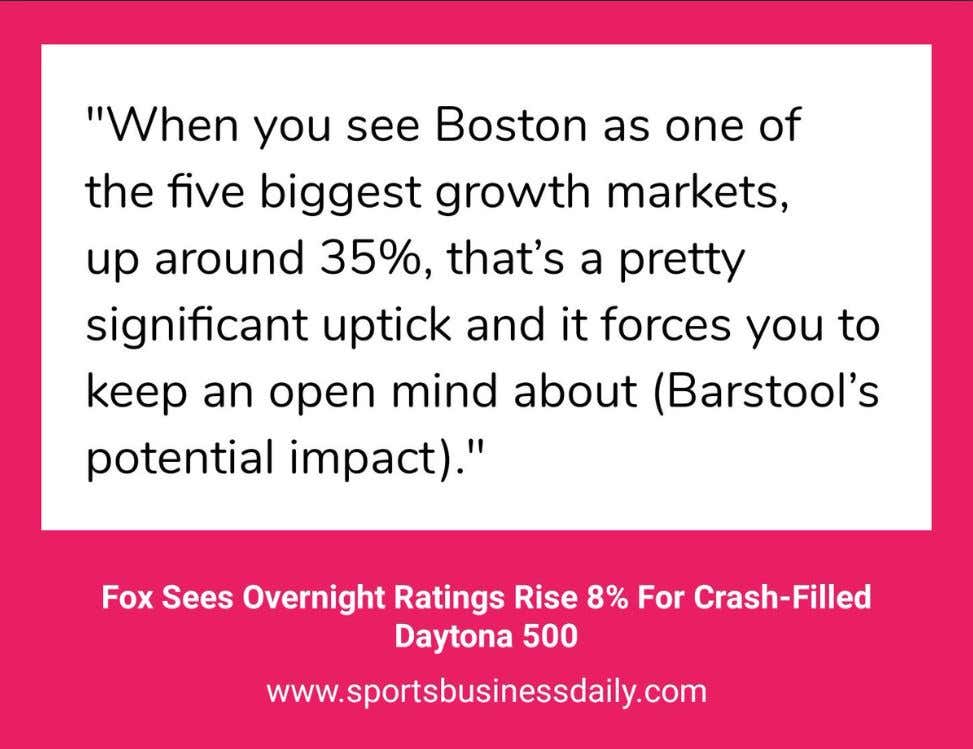 His Nascar success is what makes this journalist wonder what can’t Dave Portnoy do? Nascar may just be the beginning for him. I mean is there any other human being alive who so effortlessly cross into so many different demographics and can leave them crying in the aisles and begging for more than Dave Portnoy? It doesn’t matter whether he’s vacationing in Nantucket, eating pizza at Costco, buying horses at Saratoga, at the infield at Daytona, getting handcuffed at the Superbowl, or announcing Rough N Rowdy in the sticks of West Virginia, Dave Portnoy always puts asses in the seats. I mean name another libertarian Jew from Boston who can go on Tucker Carlson and make both sides love him? A man who doesn’t see race, color, gender or income. His only agenda is not having an agenda at all. That’s how he built a 100 million dollar company from scratch. By being more honest and straight forward than Straight Arrow Genaro himself. And after seeing how well received a Yankee from the North was at Daytona it makes me think this should only be the beginning for this manchild. That he may be the only one left who can unite this country. I can only hope somehow he reads this and maybe just maybe he’ll think about a career in politics. I know he’s probably too humble to want to be President or in the public eye, but our country needs him. Because a vote for Dave Portnoy truly would be a vote for America.