(source)–The rise in people who think the Earth is flat is caused by convincing YouTube videos that ‘promote misinformation’, psychologists have suggested. Researchers say the platform should present a more balanced list of content rather than one-sided conspiracy theories. They said that YouTube needs to make changes to its algorithms to make their systems more accurate but also called on experts to create content to disprove the claims.

Here we go again. Researchers are always using time, money, and resources to study and theorize about the most pointless things in the world. Studies about how being homeless is bad for your health, or the one about how good colonoscopies are more effective than bad colonoscopies, or that depressed people tend to stay sad. Now they’re saying that Youtube is to blame for Flat Earth Theorists and that is preposterous.

You know who is to blame for Flat Earth Theories gaining popularity? Stupid people. That’s it. If you’re ever like “hmm, why is this growing?”, just stop right there, look around your office and count all the stupid people you see. Okay you can stop at 12. It’s them. It’s those people. They’re the embodiment of the flat earth movement. And it’s not YouTube’s fault. People have been fucking stupid LONG before youtube ever existed. Last week I wrote a blog about Valentine’s Day and it’s origins. They’d whip young women with animal meat to increase fertility. “I fucked her and she didn’t get pregnant?!”…”Hmm, better douse her in more deer blood”.Do you know where that idea came from? Nobody knows exactly but if anthropoligists throw all their time, money, and resources at this question I am sure they’ll be able to trace it back to one stupid person.

Then you’ve got the Holy Grail of people believing stupid things…The Bible. And look…I am actually fascinated by religion. I think the Bible is EXTREMELY valuable. It’s a collection of stories that have probably existed for 40,000 years in an oral traditions before it was ever codified in one collection. It moved civilization forward in a lot of ways. It’s been translated, and re-told, and re-translated, and I believe there to be great and deep human wisdom in the Bible that is worth discussing, interpreting, and still has tremendous modern-day value. But then there are people who just read it and go 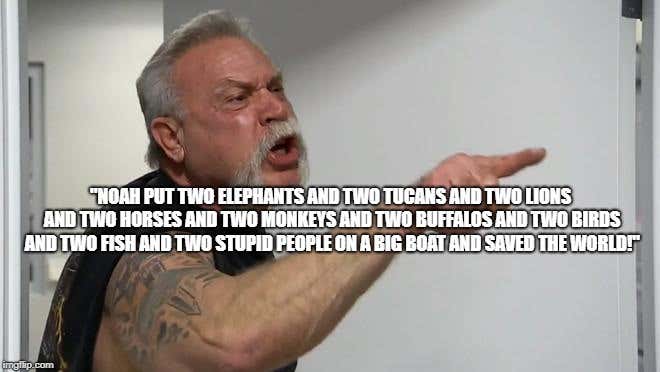 And those people, you guessed it, are stupid. We don’t have a YouTube problem, we have a stupid problem. And it’s never going to go away because stupid people just keep making more stupid people. The people who are Flat Earthers now are probably children of people who denied the Moon landing, and they’re probably descendants of people who beat their women with goat kidneys until they got pregnant.

So we don’t need YouTube to enforce new algorithms which ensure balanced content. You can’t cure stupidity with an algorithm. You know where the “balanced content” exists….everywhere else in the world. These people are actively seeking stupidity so they can be woke because they slept through High School physics and their 9-5 job as answering phones isn’t intellectually stimulating enough for them. So let them have it. Leave youtube alone.