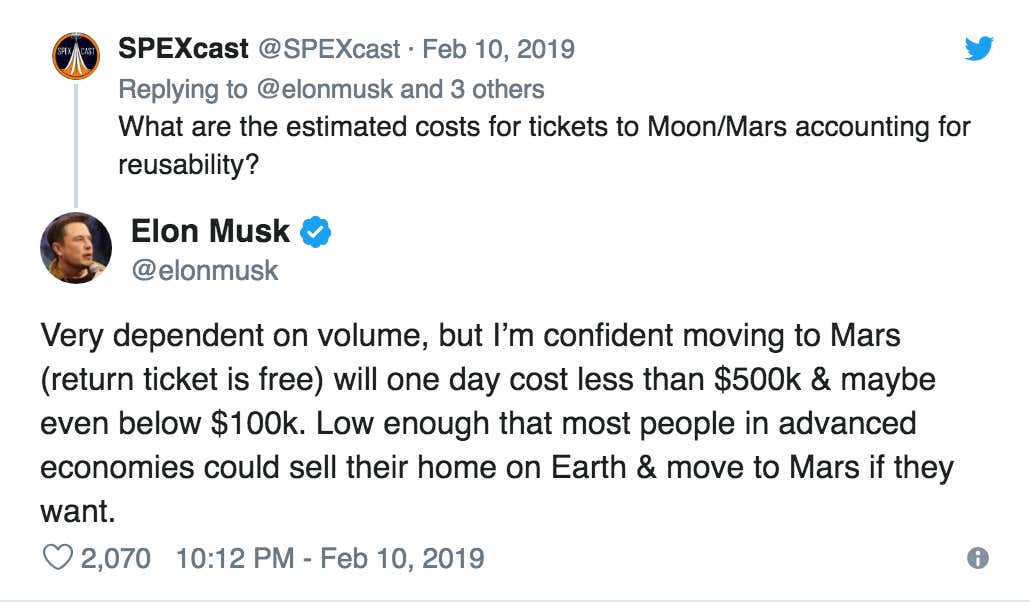 CNBC- Elon Musk says he is “confident” moving to Mars will “one day” cost less than $500,000 and “maybe even” cost below $100,000. While the final cost is “very dependent on [the] volume” of travelers, Musk said the cost of moving to Mars will be “low enough that most people in advanced economies could sell their home on Earth [and] move to Mars if they want.” (The median home price in the U.S. is $223,900, according to Zillow.) The comment was part of a Twitter thread announcing the Raptor engine (the engine which will power the rocket’s travels to Mars) has achieved the “power level needed for Starship and Super Heavy.”

How? How does he know that? How could he possibly know that? Show your fucking work, Elon. Break out the math. Give us more than one (1) tweet about it. I wanna see what set of calculations he made that brought him to that preposterous conclusion. Really think about how crazy that statement is. No human has yet to step a single foot onto Mars and Elon is already like, “Yeah it’s gonna cost less than $100,000 to pack up your stuff and move there.” HOW???? How can he know how much it’s gonna cost to move somewhere when literally not one person has been there?

Spoiler alert: he doesn’t know. He doesn’t have the slightest clue. I moved from Cedar Rapids, Iowa to New York City and it cost me a few thousand dollars but Elon says he can ballpark how much it’s gonna cost to move 34 MILLION miles to a DIFFERENT PLANET. The fact that he would put a number on it shows you how delusional he is. It says everything you need to know about the guy. It had been awhile since Elon Musk made one of his grand proclamations with zero supporting evidence but he came out of retirement with a BANG with this one.

The key words in his tweet are “one day” That’s such an Elon Musk way to say something. It leaves it completely open-ended. “One day” could mean 10 years from now or it could mean 10,000 years from now and that’s precisely where Elon Musk likes to live. The less specific the timeline the better. That way, 10,000 years from now when it does cost less than $100,000 for a person to move to Mars somebody will say, “Huh I guess that Elon Musk guy from a long time ago was right.” It makes me sick. Elon knows exactly what he’s doing.

It’s not enough that there’s talk that people could eventually live on Mars. Elon Musk has to go one step further and tell people that it’ll be relatively cheap to do so. He’s a pathetic narcissist who needs people to view him as an all-knowing genius no matter how absurd his thoughts are and you’re a brainless sheep if you buy into it.