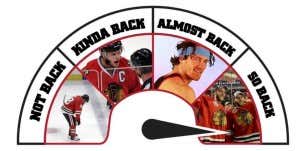 This team is different. That’s why I have the back meter set to “So back”. Are they a true Cup contender…maybe not at this point. Are they winners…fuck yeah they are. Last year, down 2-0 early was a death sentence. The Blackhawks would’ve mailed it in. This year…it’s a challenge. It’s an opportunity for Patrick Kane to be the MVP. A chance for Jonathan Toews to rip the opponent’s heart out. It’s a different culture. It’s the old culture of never being out of a game and GOD DAMN it is good to be back.

All year long I said I would define “success” for this team with a very low bar. I wanted to have fun watching the Blackhawks and I wanted them to play with good habits. Well check and check. They’re not a perfect team, but they’re getting results. They play to win. They play hard. They’re getting better all the time and they went from a team who was going to ask Seabrook and Keith to waive their No-Trade Clauses to a team that should realistically look to be buying at the deadline instead of selling.

Can’t have that again. The Blackhawks need help and there’s a path to being a contender again by the end of next season so you can’t mortgage the future for a rental because there isn’t a player or players available right now who can take this team from a wild card spot to the Stanley Cup. That doesn’t mean they shouldn’t add to this team now. The Blackhawks have said that they’re going to be active next summer. They’ve positioned themselves to go after one of these big free agents, whether that is Panarin, Stone, or Duchene. They have money to spend. Having money isn’t a guarantee though. If they’re truly free agents they can obviously sign wherever they want and then you’re grand plans with clearing cap space to gear up for the summer was all for nothing and you’re left over-paying for a second tier guy because Panarin went to Florida, Stone stayed put, and Duchene went to New York. That would be a disaster and I really really REALLY think that the Blackhawks should use some of their prospect capital to get one of those guys NOW provided that they sign an extension BEFORE the trade.

The Blackhawks have a TON of young defensemen in the pipeline. I’d assume that Jokiharju, Boqvist, and Mitchell are untouchable. That still leaves Forsling, Dahlstrom, Chad Krys, Nic Beaudin, Darren Raddysh, Lucas Carlsson(who is quietly having a strong year in the AHL), Jakob Galvas, Joni Tuuola, etc. There’s a ton of intriguing prospects and the Blackhawks will never have room for all of them at the NHL level. So package some up with a couple of forward prospects, maybe a few picks, and who knows…maybe a roster player like Anisimov and make it happen. Load up now, scare people in the playoffs, lock in your main guys for next year so you’re better prepared for the draft and July 1st, and then make a serious fucking run at the Cup in 2020. It’s right there. The Blackhawks have a chance. They’re still the Chicago Blackhawks and they SHOULD strike while the iron is hot because Toews and Kane deserve help. They deserve to be rewarded for their play this year with a playoff run. They deserve to be back on top of the league in 2020. Kane-Toews/2020. Join Or Die 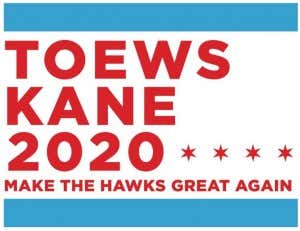