This was an awesome video and moment. It was one of the rare times you heard Bill Walton and Dave Pasch both get real for a second and admit how close they are. Walton was talking about how he wanted to kill himself 10 years ago. It’s been mentioned before, but here’s the full story:

Bill Walton is opening up about being fired from ESPN in a new interview. The legendary basketball player, who began working as a commentator shortly after retiring from the NBA in 1990, says that being let out of his contract early by the network in 2009 was so difficult he began to contemplate taking his own life. ‘When I was lying on that floor – and I had nothing – I was going to kill myself if I had a gun,’ Walton said in an interview with Sports Illustrated.  Walton writes at the start of his new memoir, Back From the Dead; ‘I can’t do this anymore. It’s just too hard. It hurts too much. Why should I continue? What’s the point in going on? ‘I have been down so long now, I have no idea which way anywhere is anymore. There’s no reason to believe tomorrow is going to be any better. ‘If I had a gun I would use it.

And thankfully Walton did not kill himself. Selfishly us basketball fans get to enjoy him and his rambles and his absurd comments on a weekly basis. Obviously he means more for his family and friends. But, this is more than that story.

This is how Bill Walton celebrated.

Rubbing chocolate all over himself and then chucking it at Dave Pasch. Just so perfect Walton. 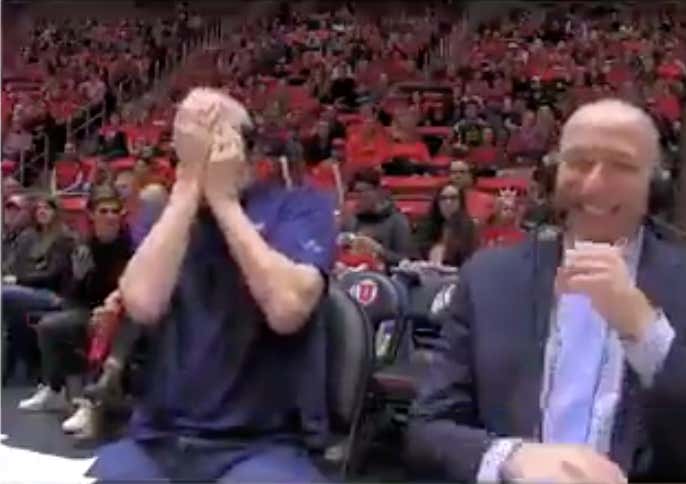 And if that wasn’t enough they also ran this bit. Things that Walton loves, which predicated this scene. Walton talking about all the things he loves. And well, words don’t justify it: