“All That” was the show that kept on giving to Nickelodeon over the course of a decade in the 1990s and 2000s. Now the company’s president thinks a revival of the sketch-comedy series could be all that — and more.

Nickelodeon will revive the program — a “Saturday Night Live” for the tween set — with an all-new cast. But the show will have callbacks to its past as well. Kenan Thompson, the long-running “SNL” cast member who got his start on television when “All That” launched in 1994, will serve as an executive producer. Nickelodeon expects some former cast members to make appearances in the series.

The sketch comedy show “stayed in the zeitgeist for many years,” Brian Robbins, president of Nickelodeon, tells Variety. “People are really fond of it.” One regular sketch, “Good Burger,” was set in a fast-food restaurant with a clueless cashier, and served up the premise for an original movie in 1997. Kids also loved recurring characters like “Walter the Earboy,” “The Spice Boys,” and “Baggin’ Saggin’ Barry.”

An “All That” revival would continue Nickelodeon’s recent efforts to dig into its past to help secure its future. In recent years, Nickelodeon executives have tested new editions of one-time stalwarts like “Hey Arnold” and “Legends of the Hidden Temple,” sometimes as movie specials. Such programs can spur viewing by both parents and children, as one generation tries to interest another in favorite pieces of popular culture.

Okay so I know the first thought that came to your head was “Nickelodeon is still a station?  Holy shit.”  Followed closely by “That station molded me into the person I am today and fucking rocked.”

‘All That” was great.  I’m sure the remake will suck ass but the original was fire.  Any 30ish year old reading this watched it and laughed their prepubescent tits off at it.

But it wasn’t even the best Nickelodeon show, not even close.  So without further ado, let’s break down the best 90s Nickelodeon shows ever.  One thing I will take to my grave is that you were either a Cartoon Network guy or a Nick guy, but if you were the former you were a complete and total LOSER with no taste in good TV.  If that was you, fuck you and your parents for raising you to probably be a pedophile or some shit.

These are all good shows in and of themselves, but didn’t make my top 5 list.  Catdog, Pete and Pete, Double Dare, The Angry Beavers, and probably a few more I can’t think of off the top of my head.

10. Clarissa Explains It All:

Not really sure if she actually explained anything ever.  Watched it all the time though and if it weren’t for Alex Mack Clarissa would have been at the top of the Nickelodeon smoke show rankings

9. Are You Afraid of the Dark?

Absolutely fucking HORRIFYING TV show.  I could only watch it when other friends were in the room because I didn’t want to look like a pussy, but even then I’d still cover my eyes all the time.  Good show though.

Truthfully Hey Arnold became popular right when I was growing out of the Cartoon stage and I only caught it at it’s tail end.  Show still rocked though.  Olga had an ugly name and uglier personality though.  Fucking worst person ever.  Just bang Arnold already do.  Nobody will care

6 (Tie).  Legends of the Hidden Temple and GUTS

I loved these shows but also hated them because I would have dominated every single game and challenge in the shows’ history.  Fucking kids were the worst athletes ever.

I don’t really remember anything about it, but the dude who held his eyeballs in the air with his hands that had hairy armpits was hilarious.  I watched the shit out of this show.

Loved Doug.  Dude was real AF.  Just such a good dude with an awesome dog.  In fact Chief is getting a new puppy next week and I think I’m gonna have him name the Doug “Porkchop” after Doug’s loyal pooch.  But not everyone in the show was cool;  Patty Mayonnaise was a twat to the highest degree and Roger Klotz was just such a douche bag.  Who in the fuck rocks a leather jacket unironically? 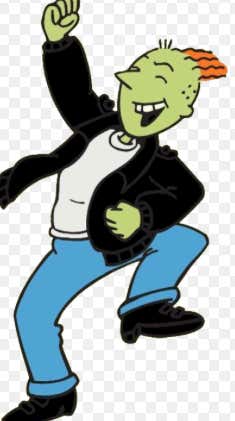 Camp Anawanda, we hold you in our hearts!  And when we think about you, it makes us wanna fart!!!

Fucking hilarious intro.  I LOVED this show.  It wasn’t as popular commercially as other shows, but to me personally it was one of my favorite shows of the 90s.

PS – guarantee you’ll have the Salute Your Shorts theme song stuck in your head the rest of the day.

What a filthy fucking show.  I don’t remember why it was filthy but I do remember my parents not allowing me to watch it because it’s probably LITTERED with sexual innuendos that I had no idea about because I was 9 years old.  This is why it’s number 2 on my list.  Because I would have to sneak episodes in when my parents weren’t paying attention.  I was all about that bad boy lifestyle.  Then I got into South Park and it was no holds barred for me.  Nevertheless, Red and Stimpy was the shit and that was a fucking fact.

The Michael Jordan, Peyton Manning, Dale Earnhardt or Griffey Jr. of Nickelodeon TV shows.  This is an indisputable fact of life. From Phil and Lil, to that ginger little pussy Chuckie who can’t even smell to that evil twat Angelica to the conniving protagonist Tommy, Rugrats is the one show 90s babies can rally around forever.

We’re gonna do a quick exercise:

Answer this question as fast as you can – what’s the ONE Rugrats episode that immediately sticks out to you when you reminisce about the show?

If you answered anything other than the Watermelon Dream episode where Chuckie swallows the seed you’re a goddamn LIAR.

Did I miss anything?  Probably.  If so feel free to let me know in the comments if you’re a paying Barstool Gold member.