The Herald – Any day now, Rob Gronkowski will let us know what he has in store for his future. …

For quite a while, the pendulum has been swinging toward retirement. Gronkowski could change his mind, of course, play out the final year of his deal and perhaps beyond. But there’s a 50-50 chance he’s going to walk away.

If Gronk does hang it up, what will it mean for Canton? … He’ll get in, there’s not much doubt about that. It’s just that no one is quite sure when. He might get passed over a few times, just like Ty Law.

Terez Paylor of Yahoo Sports, who presented Gonzalez’ case to the committee, pointed to statistics as one area that might get challenged in terms of Gronk’s first-ballot status.

“His stats aren’t as high as some of these other guys (who are in). But there’s no doubt he’s the most complete tight end of his era. But with his stats, there might be some discussion on whether he’d be a first ballot guy, or not,” said Paylor. …

“The issue with him will be the brevity of his career,” said Mike Chappell, who covers the Colts for Fox59 sports in Indy. “I would almost compare him to (former Lions receiver) Calvin Johnson, who played eight or nine years.”

As a general rule, I agree with the people who argue that “First Ballot Hall of Famer” is the most overrated designation of all time. I’m sure if you’re Ty Law or Terrell Owens or Andre Tippett or anyone else who had to wait to get in, those years you were eligible but didn’t get the votes sucked. But once you get in, what do they matter? It’s not like the First Balloters get a different colored gold jacket or there’s some exclusive parties they get to go to that you don’t. Leonardo DiCaprio had to wait forever to get his Oscar. But tonight when he lays his head down upon a king sized bed made out of lingerie models is he still supposed to be jealous of that unemployed Italian guy who won his first time out for Life is Beautiful? The answer is no. It doesn’t matter much at all when you get the prize, just that you get it.

That said, anyone who doesn’t vote Rob Gronkowski in on the first ballot should not only have his vote taken away for life, he should be exiled across the Gotham River.

By the standards and practices of the Pro Football Hall of Fame and by the laws of the Hebrew God, Rob Gronkowski is a First Balloter, period. If he retires this afternoon, he belongs in. It’s not even up for discussion. Oh, he didn’t play that long? He missed a bunch of games? By what measurement are his performances in 115 regular season and 16 postseason games not enough to get him in right away?

This isn’t Cooperstown. It’s Canton. You can’t just hang around forever being pretty good and get in on your statistical milestones. It’s about greatness. And winning. The football Hall of Fame skews toward champions, not just longevity. In the five seasons before the Patriots drafted Gronk, they made it to the Super Bowl once. From his second year to last year, a span of eight seasons, they went to the Super Bowl FIVE times. That is not coincidence. You can compare him to Calvin Johnson and the relatively short length of his career. But it’s ignoring the fact that Johnson, great as he was and through no fault of his own, appeared in a total of two playoff games in his career. Gronk’s postseason record is 12-4. 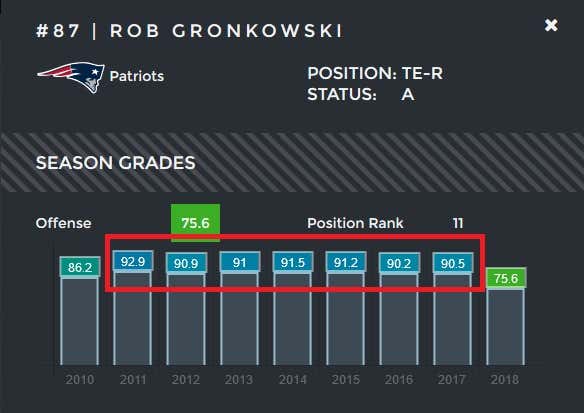 You know how many tight ends achieved Pro Football Focus ratings of 90 or more this year? Zero. Gronk is a mortal lock for the tight end spot on the All Decade Team. He’s been the record-setting best at his position by far since he came into the league. And even if he doesn’t continue, here’s where he ranks all time among tight ends, in spite of his “too short” career:

In the Super Bowl Era:

None of which, by the way, measures the least quantifiable but equally important part of his game. That while compiling all those catches, yards and touchdowns, he has been the best blocking tight end of his era.

All I’m trying to say is that it doesn’t matter who gets in on the first ballot and who has to wait. But if Gronk doesn’t get in right away and is forced to wait, then there is no justice in the world.