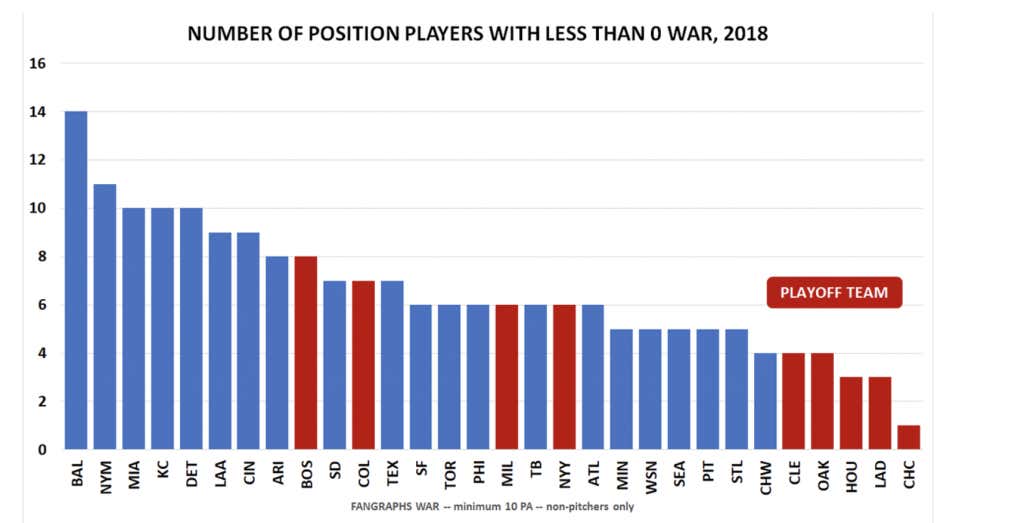 Mike Petriello from MLB.com wrote a phenomenal piece about the importance of having valuable position player depth. It’s a great read at 30,000 feet about balancing superstar talent with contributors. It also includes this outstanding 2018 Mets takedown:

In 2018, the Mets gave nearly 1,000 plate appearances to the following group: Reyes, Travis d’Arnaud, Jack Reinheimer, Phillip Evans, Ty Kelly, Guillorme, Gonzalez, Lobaton, Dominic Smith, Matthew den Dekker and Tomas Nido. This doesn’t even count the 210 plate appearances given to Austin Jackson and his .247/.290/.348 line, since he barely squeaked past 0 WAR. (Only d’Arnaud, Guillorme, Nido and Smith remain in the organization; d’Arnaud is fighting for a backup job, and the other three are all ticketed for Triple-A in 2019.) That distinguished collection combined to hit all of .194/.257/.309 and were worth negative-3.7 WAR.

My big takeaway is that it sucks to be a Mets fan.

My other big takeaway is that the Cubs are awesome at stacking position player depth. The only negative-WAR player on the Cubs last year was Yu Darvish handler Cris Jimenez who posted a -0.1 WAR in 12 games. If you consider actual contributors the Cubs would have an even 0.

Compare that to Baltimore’s 14

It puts context behind Theo’s comments that he just wants the 2019 season to start with the roster they have. Think with me – they’re basically getting a healthy Bryant and Darvish returning to the 25-man roster. I’d say those are pretty meaty acquisitions, no?

Or would you rather just be a huge flaming pussy and complain that Bryce Harper isn’t replacing Jason Heyward in RF tomorrow?

Just remember that we’re not far removed from being completely hopeless. Now our problem is we have too many good players. Too many quality at bats to go around. Too many guys performing above league average.

And even then, everyone agrees 2018 was still an outlier across the board. From 95 Wins and No Division to countless cases of regression: Contreras, Happ, Rizzo, Russell, Bryant aka The Middle Of The Fucking Lineup.

All those guys dipped and they still won 95 games. And even though they dipped, 99.4% of plate appearances were made by guys exceeding league average.

It’s just incredible how deep and balanced Theo’s plan turned out. This was the goal all along. It’s like being in an interview and they’re like what’s your greatest strength.

My greatest strength is my position player depth.

I know this is going to sound crazy but my my position player depth is so robust that it’s also my greatest weakness.