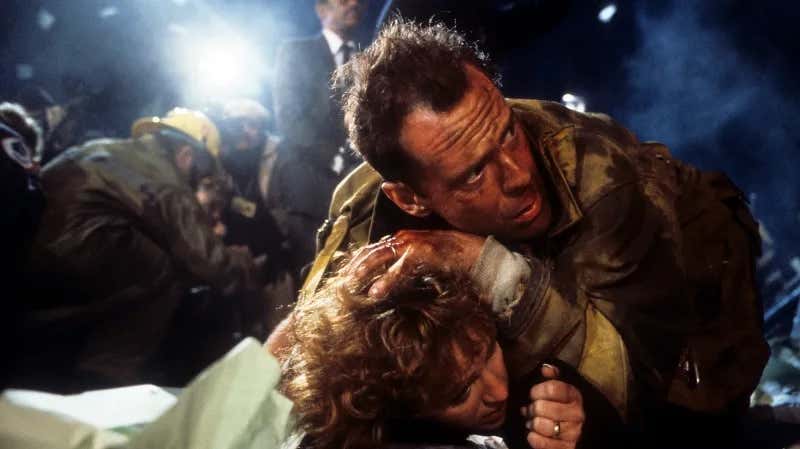 In the words of the late, great Roger Ebert, “Never marry someone who doesn’t love the movies you love. Sooner or later, that person will not love you.” As someone who’s celebrating his 25th Valentine’s Day of wedded bliss to the beguiling Irish Rose, I can honestly say I’ve never agreed with a sentiment more.

I’m lucky. While nobody loves 100 percent of the movies somebody else does, I’ve got it better than any other guy I know. At the risk of sounding like I’m bragging, I never have to sit through chick movies. And while she might have a low tolerance for my taste in stupidly brilliant comedies (years ago she banned Ron Burgundy quotes, an order I violate almost daily), The Notebook has never been seen in our house. If you’re looking for a woman whose tastes runs towards Star Wars, war movies, Marvel and Tarantino films, I’m proud to say there’s one less available because I culled her from the herd.

Which is not to say I don’t have an appreciation for movie romance. Just not the kind where Andrew Lincoln holds up cue cards to steal his friend’s wife away on Christmas or where billionaires fall in love with prostitutes who look like prime Julia Roberts. Romance is where you find it. And I find it in Guy Movies. It’s not often there. You sometimes have to dig for it. Because most Guy Movies are about the archetype of the Loner Hero, who, once he does get the girl, hops on his horse/Harley/post-apocalyptic dune buggy and leaves because he’s got to ride. But romantic moments are there, if like me you know where to look. Especially these moments from these particular Guy Movies. These dozen roses:

OK, I’ll admit that starting the list with a scene where a street hood smashes another guy’s perfect nose across his prefect face with the butt end of a gun isn’t exactly Breakfast at Tiffany’s. But sometimes a man just has to be a man. Henry Hill bringing his mobster method of conflict resolution to Karen’s little Jewish suburban world of manicured lawns and country club douchebags lays the perfect groundwork for their relationship. You can hear it the way she says she was turned on when he trusted her to hide the gun. It reminds you how, when everybody in the movie betrayed or whacked everyone else, those two crazy kids stayed together.

I could’ve easily picked the iconic “Upside Down Makeout” from the first Spider-Man. But I’m going with this better scene from an even better film. Spidey has just saved Mary Jane’s life. But as he did so, she found out not only that he is really Peter Parker, but that Peter lied when he said he didn’t love her. He was just trying to protect her. So now he’s telling her they can never be together if he’s going to keep her safe, and sends her back to her fiance, the handsomely awesome astronaut. The classic definition of the stoic hero doing the noble thing, even though it’s killing him inside. It’s the end of Casablanca, only suspended on a web made of goo Rick can shoot out of his wrist ever since he got bitten by a radioactive spider.

The only musical sex scene on this list. And in all probability, the hottest makeout sesh ever between a US Navy fighter pilot and a flight instructor with a PhD in Astrophysics.

In a movie that gets me every time, there’s one particular part that is an arrow to my tiny Irish heart. And I’ve cued it up for you in this clip. In the aftermath of the greatest sports moment of all time, Herb Brooks is leaving the bench, looks up and locks eyes with his wife. And gives her a silent look that says he understands how much she sacrificed, he appreciates how they were in this together. And the Miracle on Ice belongs to her too.

As undeniably funny as Chris Farley was (pours one out, single tear), he doesn’t get nearly the credit he deserves as an actor. No comic ever pulled off pathos the way he did. Except for maybe John Candy. (I almost went with Planes, Trains and Automobiles “Love is not a big enough word” scene here, but it hardly fits the definition of a Guy Movie.) Tommy Callahan wears his heart on the sleeve of his rugby shirt, whether it’s mourning his dad or just having a moment opening up to the love interest he never really saw as a love interest. Then, as he’s humiliatingly getting his dick kicked in the dirt by some disrespectful little punks, Michelle turns into Unhinged Demon Hell Bitch, proving she is no one to be trifled with when it comes to her feelings for Tommy.

7. Raiders of the Lost Ark

Indiana Jones is the perfect example of the Loner Hero who can’t be tied down to any woman. As a matter of fact, Miriam Ravenwood is one of the hearts he broke along the way so he can run around the world chasing after trinkets. Then he gets his ass kicked by Nazis while saving her and the Ark. And one of the best female leads in the history of action movies takes care of him, their old romance rekindles, and they almost make out. But saving the world from Nazi tyranny will take the drive out of any man.

Holly Gennarro McClane broke up her family and her husband’s heart to take a job 3,000 miles away working with coked up 1980s stereotype Yuppie dildos. Then she went back to using her maiden name without telling him. All it took for them to get back together was for John to kill a building full of Eurotrash terrorists for her to go back to her married name. Then when the most Germanic and apparently unkillable of all the terrorists turns out to be annoyingly not dead, John throws his body on the estranged wife who used his soul as a panty shield in order to protect her. That is the power of love, personified.

Broomhilda thinks she’s been sent by her slaveowner, Calvin Candie, to the guest room to have sex with his guest, Dr. Schultz. Instead, Schultz reunites her with her husband, who escaped bondage and recapture, came halfway across the country and waded through a sea of blood to come be with her again. And win her freedom, either with money or by burning the Deep South to the fucking ground. You could watch him come out from behind that door a million times and still be as surprised as she is.

William Wallace takes Murron out for rides in pouring Scottish rainstorms. He peacocks like a son of a bitch with his Latin and French and ability to read. Then he just lays it out there with a simple “I love ya. I always have.” Don’t let the fact that the marriage could’ve ended better take away from great Act I scenes like this.

Vincent Ludwig’s evil plot to have brainwashed Reggie Jackson turned into a robot who kills Queen Elizabeth is foiled by LAPD’s finest, Lt. Frank Drebin. By dropping a fat lady out of the upper deck on top of him. (You know, that old movie trope again.) But Ludwig has a fail safe. Jane is also turned into a robot. Only this time, without an overweight person above her head, he snaps Jane out of it with one of the great romantic speeches of all time. Which is carried live on the Jumbotron. And might actually bring world peace.

The original Rocky was always as much a romance movie as it was a gritty piece of ’70s cinema and the GOAT of all sports films. And there’s no part that gives me all the feelings than the beginning of this clip. Rocky gets sent to he canvas by Apollo. The fight is over. And Mick, who spent the whole first 90 minutes acting like he doesn’t care about Balboa at all, is pleading with him to stay down. Because he loves him. Then, for that double dose of romance, in the same 15 second time span, Adrian (who’s actually dating Rocky) finally comes out of the locker room to watch. He staggers to his feet. Motions for Creed that he’s ready for more. Because he’d rather die in front of Mick and Adrian than give up now. And she shuts her eyes. Just shuts her eyes. I’m not lying when I say a few weeks back my lovely wife caught me watching this with real tears in my eyes. Don’t judge me.

The most manly, testosterone-fueled and homoerotic movie of recent memory ends with the most romantic moment. King Leonidas, at the brink of death. Bleeding out. Blinded. Surrounded by the bodies of his Spartan warriors. Seconds away from being turned into a spiky sea urchin by a million Persian arrows. And words he speaks with his dying breath are for the woman who told him to come home with his shield or on it. “My queen. My wife. My love.” If I should meet my end at this laptop, face down on the keyboard in a puddle of coffee, just pretend I went out the same way.