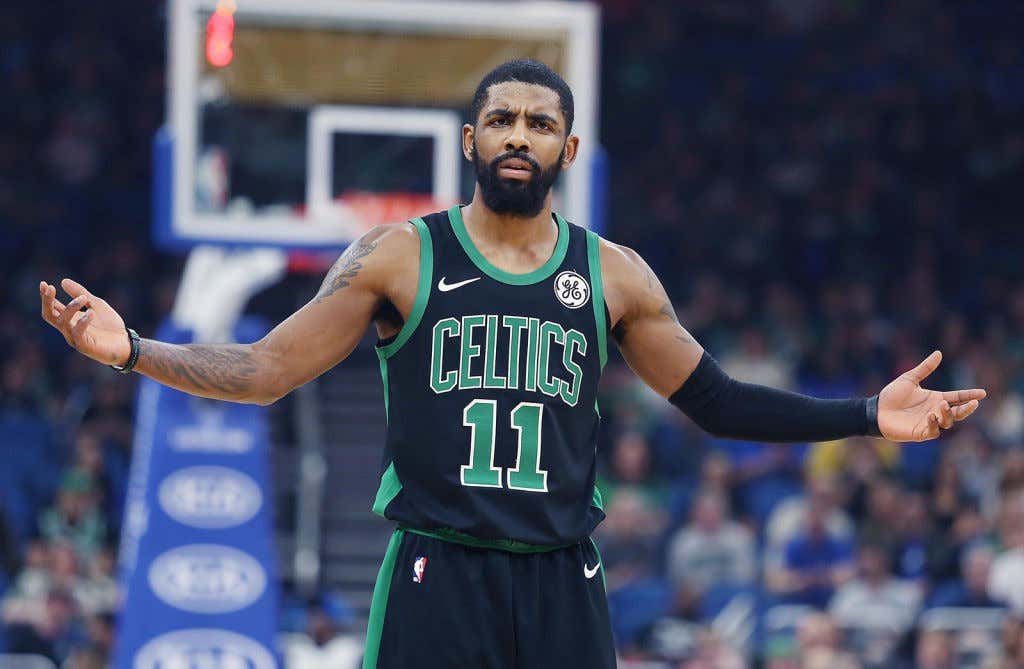 I don’t know what it is, but whenever the Celtics win a game without their star starting point guard, the narrative suddenly becomes that they are a better team without that player. It happened every single time the Celts won a game without Isaiah, whether it was against the Magic or the Hawks, and it’s 100% happening now to Kyrie Irving. I shouldn’t have to explain how ridiculous of an idea this is, but given their win last night over the Sixers it’s almost impossible to avoid this hot take. It’s on Twitter, it’s on TV, it’s on the radio, people really think this team is better off without their best overall player.

So, allow me to explain why this is complete and utter bullshit. Those who truly believe this will point to their 8-2 record without Kyrie. Well let’s look closer to who those wins are against: PHI/CLE (2)/CHA/BKN/DAL/MIN/NO. Collectively those teams are 129-155. I would hope that without Kyrie in the lineup that the rest of the talent on this team would be able to beat a collection of teams that are nearly 30 games under .500. That seems like a weak argument to me.

If this team is so much better without Kyrie, explain this?

As you can see, when this team actually plays good competition and doesn’t have the comforts of home, they actually kind of stink without Kyrie. If they are so much better without him, why can’t they win on the road against good teams?

The next thing I hear is everyone plays better without him on the floor. Wait, you mean guys step up and pick up the slack with a guy out? It’s so weird to me that when the #1 option isn’t playing, guys get more shots and as a result score more points. I’d go so far to say that’s true with literally every single team in the league. If you go back to the list of teams they’ve played without Kyrie, no shit their numbers are better. Those teams stink. So I’m sorry, I’m going to have to reject that as well.

Looking at the numbers, it’s actually pretty silly we’re having this discussion in the first place. The Celtics net rating is a full 7 points better with Kyrie on the floor than without. They score more points off TO, have more fastbreak points, more points in the paint, more threes, more FTs, more rebounds, more assists, more steals, better FG%, better +/-, the list goes on and on. If you want to focus on the fourth quarter, arguably the most important part of having Kyrie on your team, the numbers are even more staggering. Their fourth quarter net rating drops from 12.1 to 2.6 without Kyrie on the floor. So let me ask, if this team was better without Kyrie, why don’t the numbers support that?

Then you hear, “well, they went deep in the playoffs without him”. That’s true, they did. But let me ask you this. During that Game 7, when every single Celtic couldn’t buy a bucket, do you think it helps if Kyrie was available? Given what we know about his playoff performances and ability to come through in fourth quarters, do we think that series even goes 7 if he’s healthy? Probably not. When you get to the playoffs what do we often see. Benches shorten, and talent usually wins out. So how can anyone sit there and make the case that when it matters most, this team is better off without their best talent? How does that make any sense?

Digging in on this stance because the Celtics have been able to beat a bunch of dogshit teams, mostly at home, without Kyrie could not be more foolish. Let the talking heads and Sixers fans be the ones to scream this after every Celtics win. If you are a fan of this team and truly watch them play every single night, this should not be a debate. The Celtics are not better without Kyrie Irving. They most likely cannot get to the Finals without Kyrie being at his best.