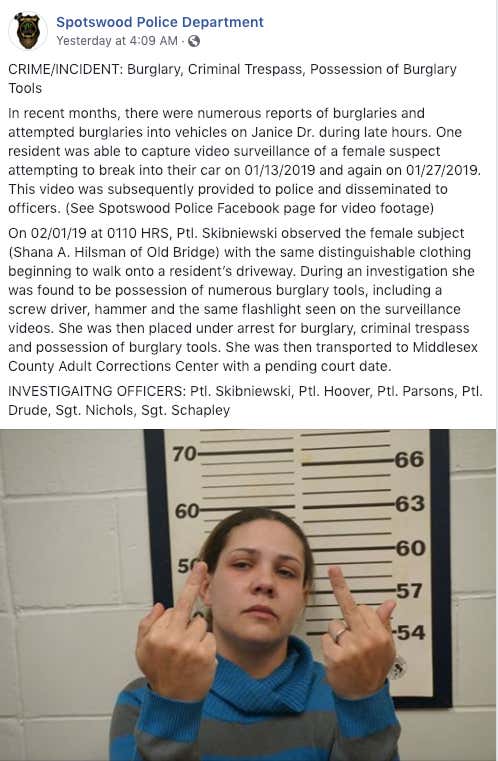 Based on everything I have heard about jail from people that have ended up there, going to jail stinks. Granted, most of the first persona accounts I have heard about it are from 4 mamalukes I work with that got arrested defending Tom Brady on the floor of NFL HQ. But nonetheless, getting cuffed, booked, and a mugshot is a humbling experience that only gets worse once you get tossed in the clink (which is slang for the slammer which is slang for jail).

However I love what Shana A. Hilsman of Old Bridge did in her mugshot because she completely flipped the script on The Man. If I saw that picture with this story, I would just think ol’ Shana was a thieving scumbag that may or may not deserve to get her hands chopped off Aladdin style for her crimes. However, all I could hear when I saw that mugshot was glass shattering followed by Stone Cold Steve Austin’s music playing and Jim Ross screams “BAH GAWD, IT’S THE OLD BRIDGE RATTLESNAKE”. Shana went from an exactly 5 foot bag of shit to an exactly 5 foot bag of spunk by simply throwing up a double bird. Which is why I again say, if you are going to get arrested, you might as well win the mugshot. They may take your lives, but they’ll never take your freedom! Actually that’s way off. Taking your freedom is exactly what they do. Ummmmmmm they make take your freedom, but they will never take you having a badass mugshot whenever a future employer googles your name!