Last night’s episode of The Bachelor took us to Vietnam where girls were just dropping like flies. We lost five total girls last night and I have to say I predicted it pretty well last week when the Onyeka and Nicole drama was dragging on.

Right off the bat we get a rose ceremony because they hit us with a bogus to be continued last week when it was blatantly obvious that Colton was going to send Onyeka and Nicole home after their tattling.

No one was on this show for fame more than Onyeka. All smiles on her way out. No shot she liked Colton at all. And on the opposite side, all tears from Nicole. An important quote from The Princess Diaries comes to mind here for Nicole. 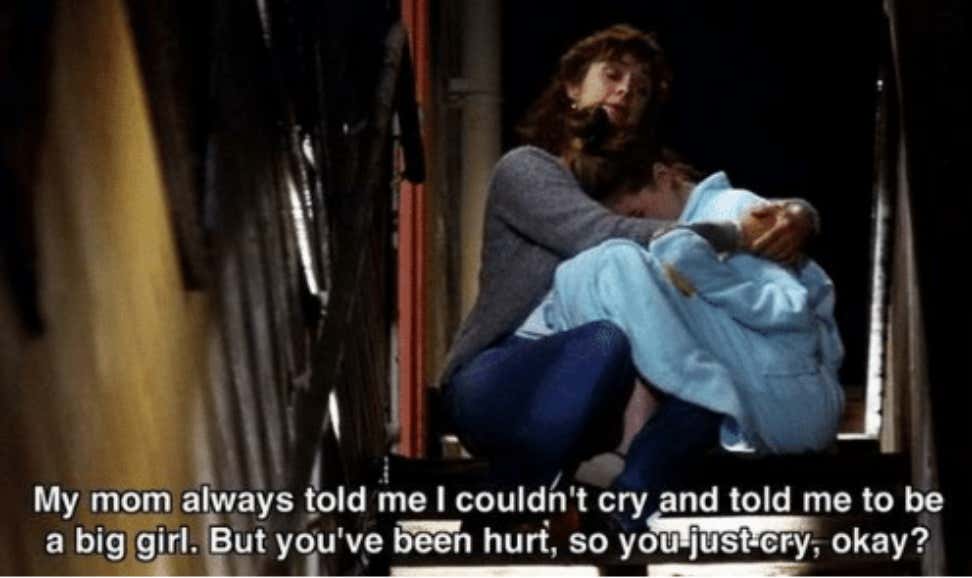 One on One Date:

Hannah G. secured the solo time with Colton and the other girls are clearly skeptical. Normally I just assume that the girls are just jealous when they start questioning the “depth” of some of the other girls but I see where Caelynn and Cassie are coming from. I’m getting a lot of Lauren and Arie vibes from Hannah G. and Colton and I don’t like that one bit. Finally we got a one on one date that I could get behind. A trip to a spa. Colton and Hannah G. absolutely cannot stop touching each other. They spent their whole date practically naked and making out.

I’m not sure if anyone is going to follow me with this reference but Hannah G. reminds me of Alice (Isabel Lucas) in Transformers 2. She was able to manipulate Shia LaBeouf in that movie just like Hannah G. is getting Colton to fall in love with her by saying the minimum amount of words. Plus they look very similar.

Hannah G. opened up to Colton during dinner to talk about her parents divorce, something she and Colton have in common. Smart move. Trent summed up her story about her mom driving through their dad’s perfectly loved and manicured lawn the best.

And then there was more kissing. Colton said he was falling in love with Hannah G. *sigh* Oh, Colton. Let’s not forget that Hannah’s occupation is “content creator.”

The group date card arrived to the house and Demi was dying for that one on one. But alas…the date goes to Kirpa!!! I was pumped for Kirpa, who seems like a very normal, sweet girl who has a real life job. However, Demi was not as pumped.

Another group date where the girls are hitting each other. At this point of the show I bet all the girls want to punch each other in the face so this is awesome! Teach the girls the art of Vovinam. They also threw in the host of The Bachelor Vietnam and I can’t believe Chris Harrison didn’t ask him about the two female contestants that fell in love with each other and left together on their season last year. HUGE missed opportunity. Bachelorette alum JP Rosenbaum said it best.

Once again Hannah B. took a group date activity way too seriously. There is a little too much pep in her step for me.

This was really the beginning of the end for Demi. She got bullied during her fight with Katie, and was indeed, punched in the face. Demi is a verbal fighter, not a physical fighter, that was shown here. Also, I wanted to die watching Heather fight. She just screeched the entire time it was awful.

During the night portion of the group date, Sydney’s issues start to shine. Not to brag, but another great prediction by me.

Tayshia also talked to Colton about her struggles and once again, he handles it like a champ. I actually caught myself smiling back at my TV at Colton like he was talking to me. That’s how good this guy is at being The Bachelor. It’s this look, guys. It’s getting to me. 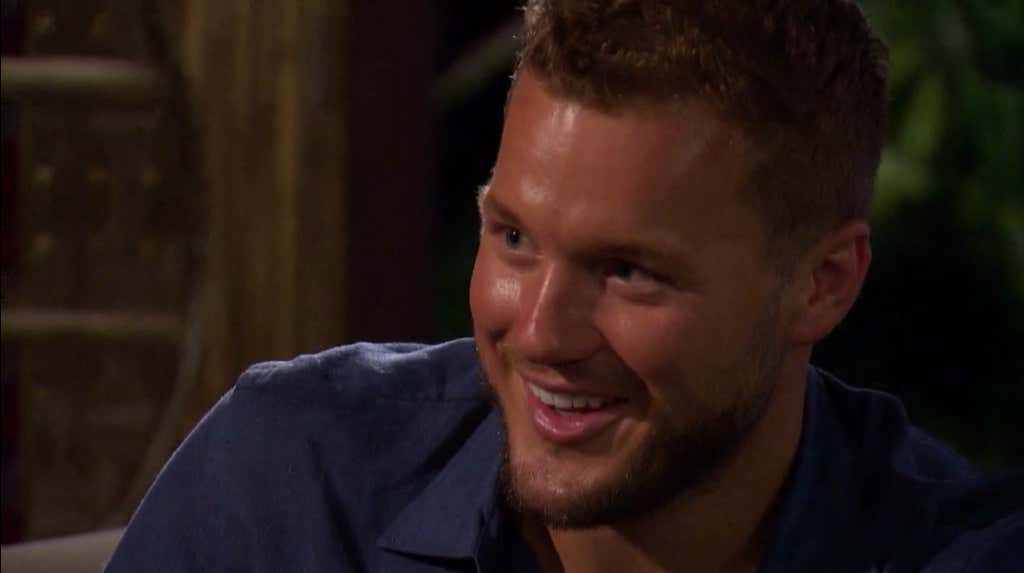 And then he did it again with Katie!!! She was afraid Colton was going to misunderstand her and he calmed her down in an instant. 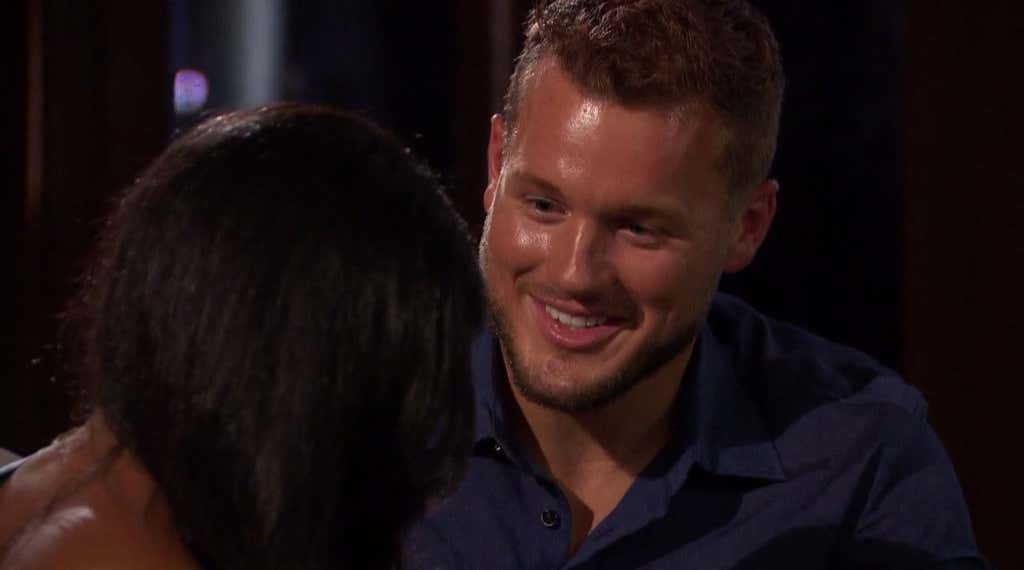 So clearly the producers had to find a way to get Demi’s mom involved. Maybe they were tipped off that Colton wouldn’t keep Demi till hometowns so they had to get her in the mix with a phone call.

It was a very cheesy phone call, as expected. Obviously Demi is going to talk about how important her mom is to her. The one thing I could have done without was all the “mommys.” Once you hit 18, stop seriously calling your mom mommy. Thank you.

Then it’s Colton’s turn to calm down Sydney but to no avail. Sydney sends herself packing. I understood this move, she didn’t get a lot of time with him, no one really knew who she was, and she could tell she had no chance to make it another week. Break up with him before he breaks up with you, they say. She left Colton with a warning to look out for some of the girls…which seems to be a trend. 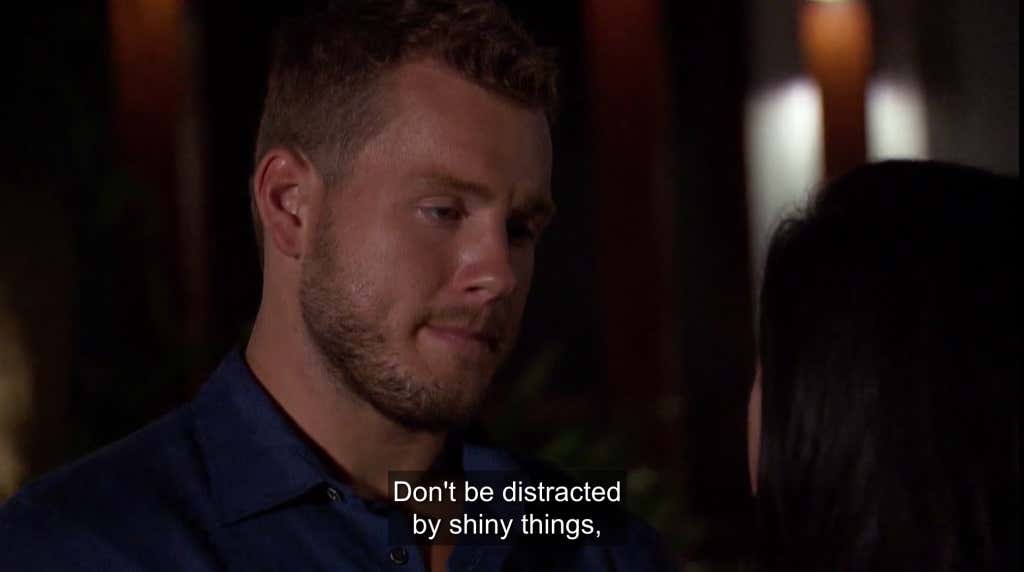 This is where my predictions for this episode took a turn. Production fooled me that Kirpa would be sent home during her group date, especially with the other girls talking about how Kirpa might not be coming back. Then there was the “run and jump into Bachelor’s arms” move that every girl does when they get a date and Kirpa’s was awful. 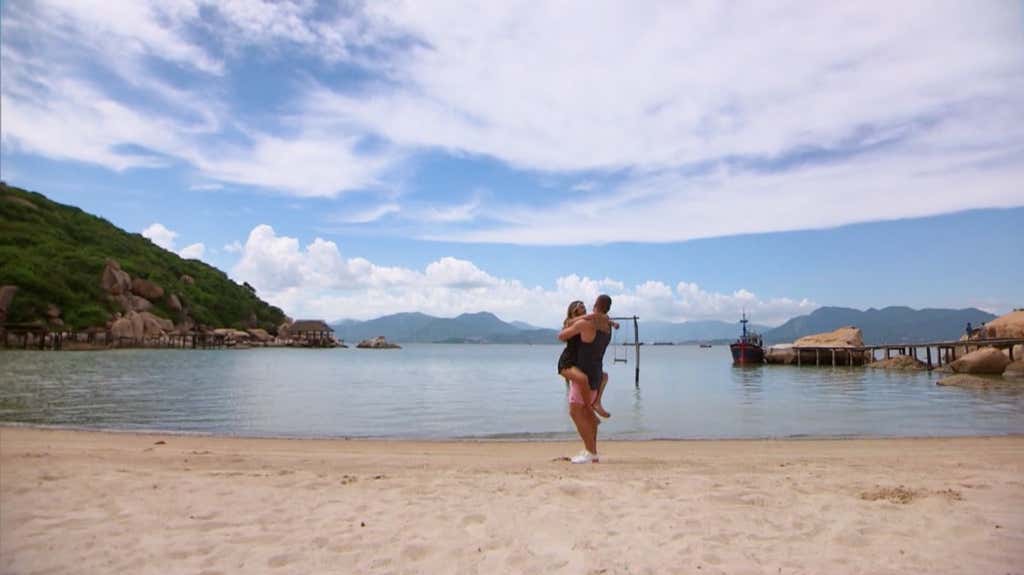 Kirpa and Colton are obviously moving at a slower pace, but they seem to actually have a decent connection. They got to open up to each other, snorkel together, and during their dinner Kirpa talked about her past engagement. I would like to give a shoutout to casting here. They found so many girls who have some kind of virginity or lack of sex story from their past. Kirpa revealed that her ex-fiance was saving himself for marriage.

Kirpa: “Yeah I wasn’t worried about the virginity thing because of my ex being the same w–”

Colton: “WOAH WOAH IT’S DIFFERENT IT’S NOT FOR RELIGION I WANT THE RIGHT PERSON SEX IS IMPORTANT I WANT TO HAVE SEX SO BAD” 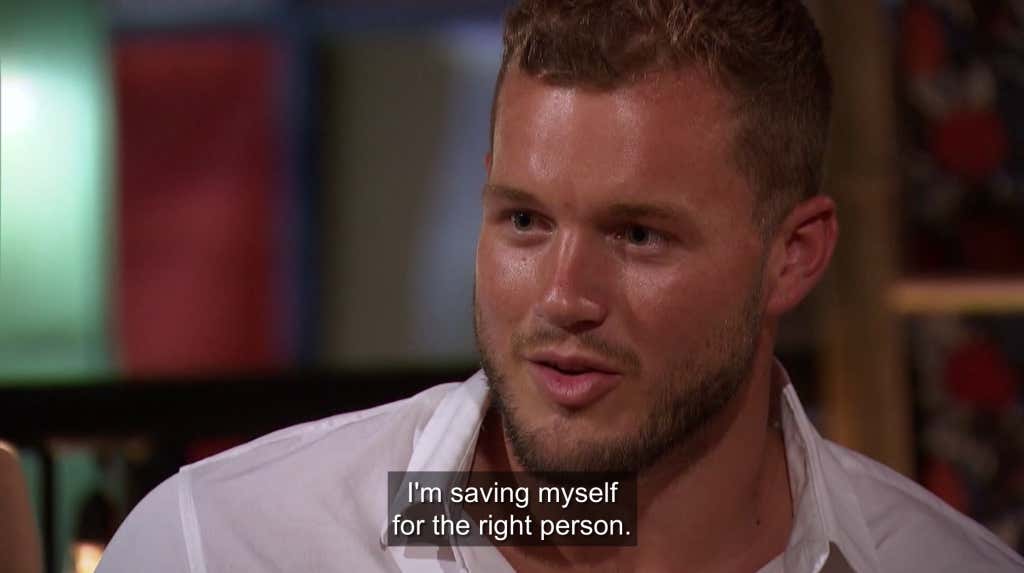 Defying the odds…Kirpa get’s a rose.

Demi was clearly upset by her lack of one on one time with Colton so she took matters into her own hands and went to see him. We could see Demi’s exterior “mean girl” shell melt away during their conversation. She seemed to want to be vulnerable with Colton and tell him how she really felt…and Colton rejected her right then and there. See ya never. Demi also leaves Colton questioning the rest of the girls.

I received some tweets that Demi was not a villain. Look, every year they select a girl to be the “villain” of the show, and this season it was Demi. Does that mean she is an evil person? No, not at all. It’s just the role they had her play on the show. I have grown to like Demi a lot, she is very funny on social media. I would love to have her on the podcast!! Demi’s ticket to paradise is already booked. We will see her again, and it will be epic.

She also discussed the edit that made it look like she was going to Colton’s room on a mission to take his virginity.

Demi will be just fine. You do you, girl.

This leaves the rose ceremony left and Colton sent Katie home. She ALSO leaves him by telling him to be careful, that there are some girls left that are not ready for marriage. Well yeah no shit. None of these girls (except maybe Tayshia and Kirpa) seem to be ready for marriage. Everyone is so fricken young. Heather is still around!!! She just had her first kiss!!! You think she is ready for marriage???? 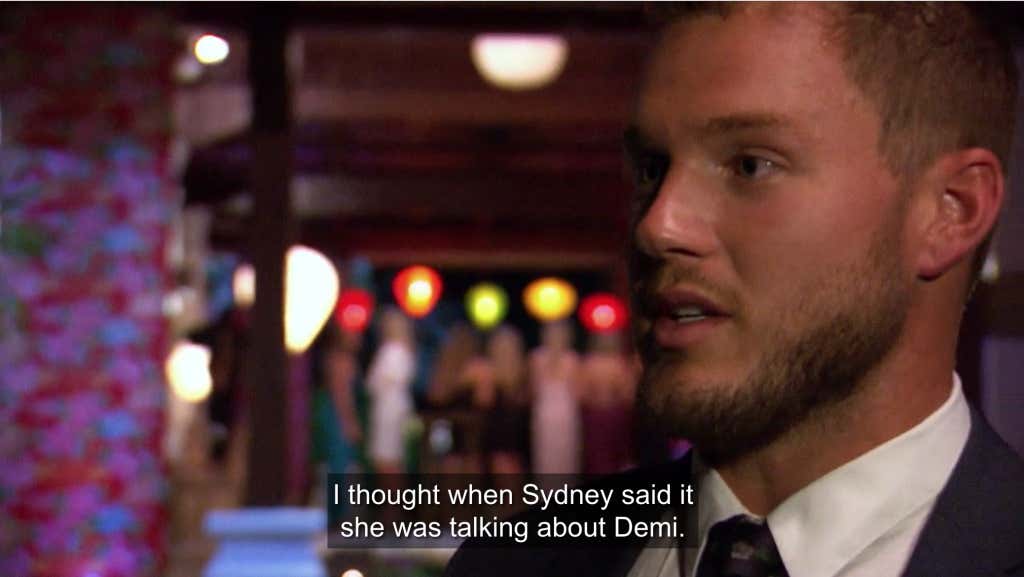 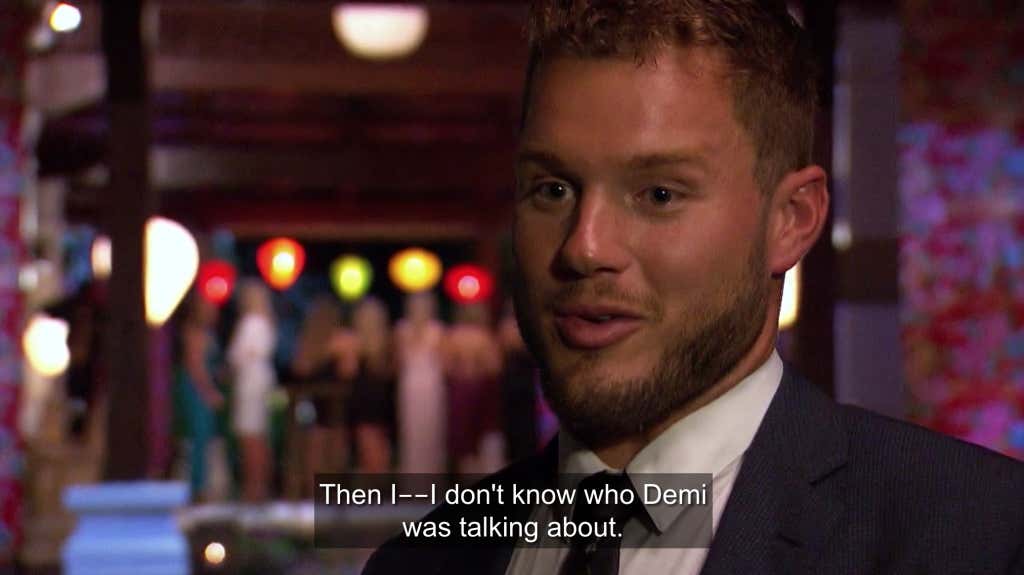 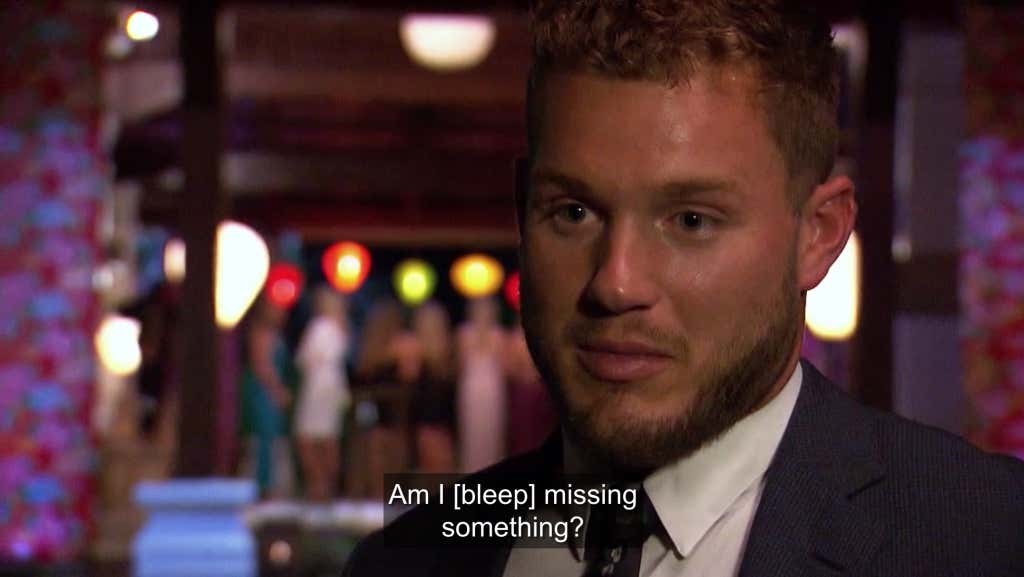 Yes, Colton, you are fucking missing something.

It also seems we are getting some kind of brunette vs blonde war going on here. All the girls were standing together and Tayshia says out loud to Kirpa for everyone to hear…that it’s going to be them at the end. “Watch us take this thing.” 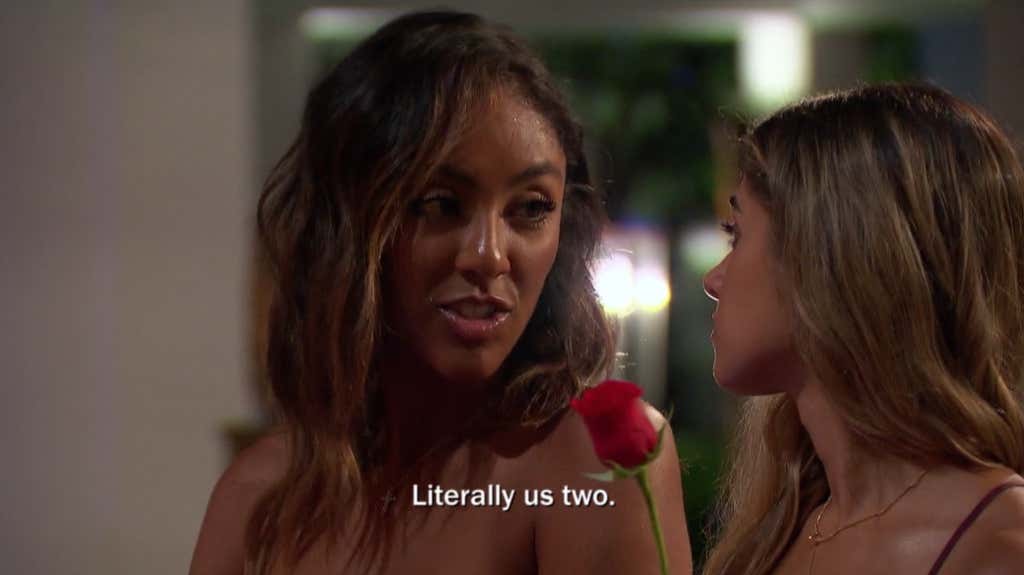 I smell disaster for Tayshia. She is going to try to throw everyone under the bus and that is going to blow up in her face.

And with that, we lost five girls in one episode. There are seven ladies left: Kirpa, Tayshia, Cassie, Hannah B, Hannah G, Caelynn, and Heather. It also seems there will be no 2 on 1 this season and that is a damn shame.

Another week….. and no fence jump.