Every once in a while I’ll come across a video that’s so trashy that it’s tough to put into words. This is one of those videos. And I’m not even talking about the puker, I’ll get to her in a minute. I’m talking about people like this:

The type of person whose style is early 2000’s Eminem meets Fat Joe meets Kid Rock. The urban white trash of the internet who always happens to be in the center of a fight. He’s the type of person whose shoes are never tied and always sags his pants. He’s the same guy who had trouble with reading comprehension and emotional intelligence in high school. I don’t know what it is about those people, but they’re always in some sort of parking lot group altercation.

Anyway, the puking seemed to be fairly effective until she fell down. She was literally aiming at those guys to try and break it up. I felt like I was watching an episode of Jackass. 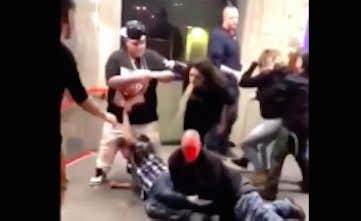 To her credit, it worked. But still, what a way to fight back. I can’t decide what’s more disrespectful, puking or spitting? It has to be spitting, right? If someone spits on you, you have to murder them. At least this is funny because you’d never expect it.  To be honest I don’t know how I’d react if someone puked on me. I’d probably just get up and walk away. It’s human instinct. You can’t fight covered in puke. Regardless, hopefully everyone got out of there with a clean bill of health. Open wounds and throw up don’t mix.