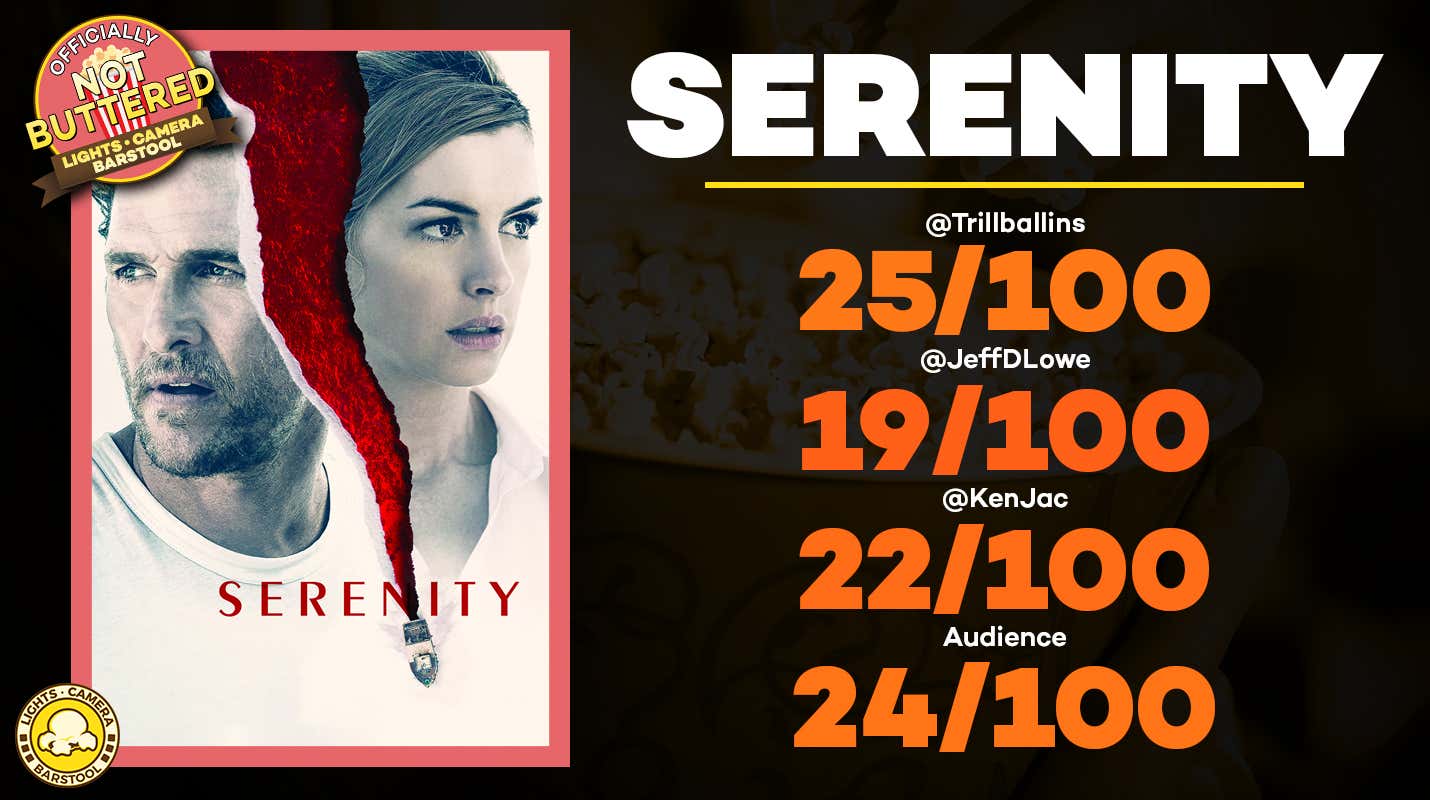 WARNING: THIS IS A SPOILER REVIEW. THIS MOVIE IS INSANE. TURN BACK NOW IF YOU DON’T WANT IT SPOILED.

Let me be clear here: I mostly understand what they were trying to do. I even commend the filmmakers for taking a risk and going for it with a bold story and plot twist. I love comic book movies and Star Wars movies as much as the next guy, but I also recognize that we need movies in Hollywood that do something “different.” With all of that said, the twist and story in ‘Serenity’ just simply did not work for me whatsoever.

The abuse plotline and the intent of the message both make sense and, on a certain level, I liked the baseline idea of what the movie was trying to say. But the twist being that Matthew McConaughey’s character, who is actually dead, is being controlled via his son through a video tossed everything out the window for me. There is an intensity and weight to the message of fighting abuse, especially since it involves someone being killed. For it to all mostly play out in some sort of strange video game nukes the narrative and tone of the movie.

Again, I can’t say enough about filmmakers taking a chance in this day and age of tent-pole movies and reboots. But in the end, ‘Serenity’ just fails on every level when it comes to the story. I am a big fan of weird movies, don’t get me wrong, ‘Her’ is an all-time favorite for me. Sometimes, though, movies cross the line of being “weird” and just simply not working as a whole. I’d suggest ‘Serenity’ just because of how shocking the twist is, but the movie itself can’t get anything but a low score from me.

KenJac (22/100): ‘Serenity’ felt like the perfect example of the “a camel is a horse designed by committee” analogy. There were so many different inputs and influences felt throughout the film, but it never finds footing and relies on a twist that they bust out maybe 2/3rds through the movie. I expected slightly better from writer/director Steven Knight, who penned some incredible stories in ‘Eastern Promises’, ‘Locke’ and ‘Peaky Blinders’.

I can’t put any of the blame on Matthew McConaughey or Anne Hathaway, who sort of overacted the roles of noir anti-hero and femme fatale, but I do put all of the blame on Steven Knight. It felt as if there were 3 distinct scripts were written by him, and instead of making separate movies he simply made an amalgam of them all. It didn’t work and the twist they used was absolutely insane, and it makes the movie impossible to review without spoiling it so…

So, the big spoiler in this movie is that McConaughey, Hathaway and Jason Clarke are all just digital depictions of real-life people designed by a kid in his room. Said kid is dealing with the death of his father (McConaughey) and his abusive step-father, so naturally, he designs everyone he knows into a fishing version of the Sims where he gets to role play as his dad fucking his way through an island. Like, what the fuck? Him getting his digital dad to kill his digital step-father also gives him the courage to knife his stepfather to death IRL, which is presented as a very good thing in the film. That dual message of murder is good and digitally creating your parents so that you can roleplay as your dad ghost fucking your mom as a coping mechanism to domestic violence is simply weird.

—
‘Serenity’ is Officially Not Buttered with a very low averaged out score. Subscribe to Lights, Camera, Barstool where we will review ‘The LEGO Movie: Second Part’ and rank the worst Best Picture winners at the Oscars of all time. Also, remember to rate all 2019 and 2018 movies below.