I saw Cold Pursuit this weekend because I was in Bridgeport, Connecticut—a town so bad that the only way to make it worse is by seeing Cold Pursuit.

I went in to the movie wanting to like it. I love Liam Neeson and appreciate his career choice to exist exclusively in a world of telescoped spines and ruptured tracheae (bet you thought the plural of trachea was tracheas! Haha read more books you illiterate bag of rocks). Once Liam did Schindler’s List and Love, Actually, I think he grew tired of making people cry/smile and decided that leaving audiences breathless, sweaty, and feeling like they just exercised was more to his liking. This ushered in a decade of Takens, Run All Nights, and dead children. I can’t remember the last time a Neeson movie ended with his marriage intact. 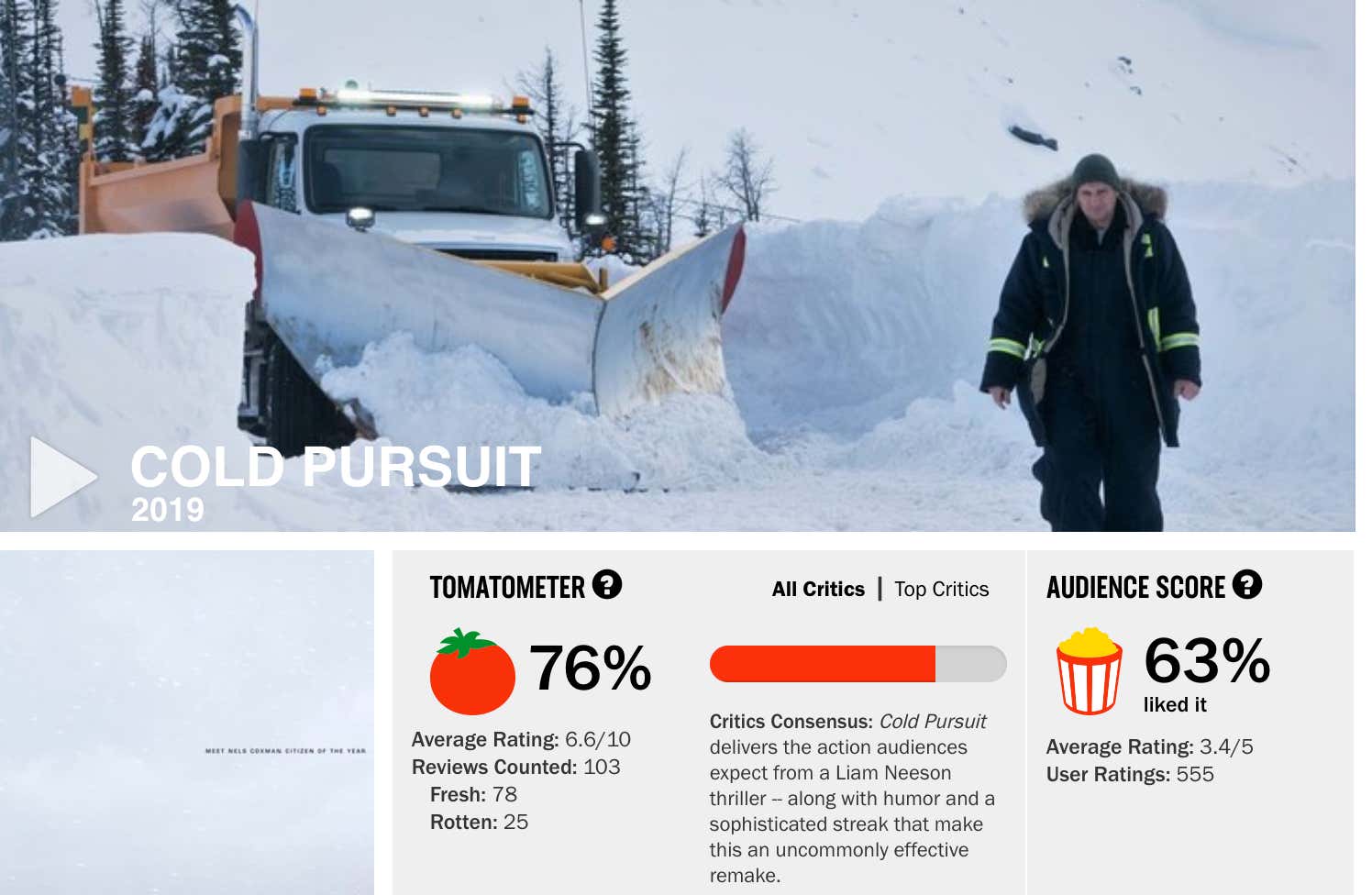 Those are solid numbers. Dave once wrote that he only considers the audience score because the critics are esoteric and value nonsense like cinematography and sound-editing—basically, the middle hour of the Oscars when you yell at the winners to shut the fuck up during their acceptance speeches. The gulf here between the critics and the audience is telling but 64% from the audience would still be a movie worth seeing, albeit on a plane.

The movie begins innocently enough. Liam is a snow-plow driver in a fictional Colorado town called Kehoe. There is so much snow. I’ve never seen snow like this. It’s almost worth seeing the movie for the snow. Early on, his son is killed by drug dealers. From there, it should be a simple revenge movie where Liam kills his way up the chain. But somebody involved said, “let’s make it more complicated!”

Out of nowhere, a tribe of Native Americans gets involved. Liam takes a backseat to the action for about 45 minutes. The Indians and the drug dealers trade murders. Liam adopts the drug dealer’s son for a night and sleeps in a bed with him a la Michael Jackson except it’s supposed to be harmless, even though Liam just kidnapped the kid. I swear to God, the last words the kid says before falling asleep on Liam’s arm are “have you ever heard of Stockholm Syndrome?” suggesting that the boy has fallen in love with Liam Neeson, who is notorious for having one of the largest penises in Hollywood.

That was when I knew we were witnessing something special.

Laura Dern plays Liam’s wife, but she leaves halfway through the movie and never appears again. Her departure doesn’t affect our stoic protagonist in the slightest. He continues to plow the roads and murder the drug dealer’s men.

Meanwhile, the drug dealer is played by Tom Bateman. This dude has one speed from start to finish. He’s supposed to be some malicious, volatile drug kingpin but he actually seems like someone you’d hire as a nanny. He cares deeply about his son’s diet and his education. All in, he’s a great father and I was sad when Liam stole his kid for the night.

In the end, the Native Americans and Liam kinda work together in a big shootout scene. The last 10 seconds of the movie provide the one bright spot, when a paragliding Indian flies straight into Liam’s snow blower and is blown to bits. But it’s not worth going just for this scene.

The movie was so bad that I genuinely wondered if Neeson’s story about wanting to kill that black guy was manufactured for the sake of distracting people from Cold Pursuit. It’s a bold strategy, but you’ll notice that nobody is talking about the movie.