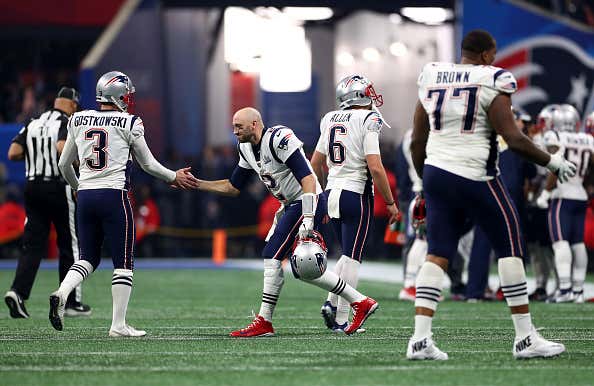 MMQB – It may sound crazy to say that the Patriots might not have lifted their sixth Lombardi Trophy in 18 years without a guy who didn’t take a meaningful game rep all year. But after listening to the way Devin and Jason McCourty talk about their backup quarterback, it’s clear just how much of a difference Hoyer made on the team, and a play that will be forever remembered here. …

“[Brian] Hoyer’s been crucial,” Jason McCourty says . … “Hoyer’s not a scout-team quarterback from the standpoint where, ‘O.K., here’s the card, here’s what’s circled, and I’m gonna throw the ball here.’ Hoyer lines up, and says, ‘here’s the card, but this is just a route concept.’”

In 2014, his second year [in Cleveland], he started 11 games for coordinator Kyle Shanahan, then played for Shanahan again in San Francisco in ’17. Rams coach Sean McVay coached tight ends for Mike and Kyle Shanahan in Washington from 2010-13, which led Hoyer to believe he’d have some institutional knowledge of McVay’s offense.

Before the Super Bowl, he watched an episode of Peyton Manning’s Detail series on ESPN-Plus on Goff, and it hit him right away—the offense is the same. Looking at the Rams tape confirmed it. Then, he saw an NFL Network interview where Goff and McVay discussed the coach being in the quarterback’s ear up until the 15-second play-clock cutoff, which was something Shanahan did with Hoyer. …

“Having played in that offense, they don’t have an answer for all-out pressure,” Hoyer says. “Their answer is for the quarterback to make a play.” …

The Gilmore pick was one example of how having all that experience—the 11 Super Bowl starters on defense came in with 69 NFL seasons, 46 under Belichick, between them—paid off, in conjuction with the knowhow Hoyer passed along.

After the Patriots won the AFC championship game, I wrote a blog titled “The Patriots Wouldn’t Be Here if They’d Kept Jimmy Garoppolo. People Forget That.” My premise being that … well, exactly what the headline spells out. They had to make a decision on Jimmy G. Either move him for assets, lose him for a compensatory pick, or replace Tom Brady with him immediately after the season in which Brady won the MVP and threw for 505 yards in the Super Bowl. And that decision to stick with Brady past his 41st birthday and beyond was the reason they were in yet another Super Bowl. And now we can add, champions once again.

The reaction I got was unanimous. With one voice the public said, “You’ve created yet another masterpiece. Truly words are your paint, and the Patriots are your canvas. The idea of paying Jimmy G Franchise money to back up Brady was lunacy. The notion of him leading this team to a championship is pure fantasy. Bless you for enlightening us your wise brilliance, O Handsome One.”

Oh, wait. Sorry. That’s what I told myself when I posted it. Mostly the reaction I got was people changing the subject to “Yeah but … they didn’t get enough for him.” Which is a different discussion altogether. And one that this is the perfect time to address. Because what no one ever wanted to hear when Belichick flipped Garoppolo to John Lynch in San Fran for a 2nd rounder was that he also got Hoyer in the deal.

Never discount the importance of having a backup QB who has spent time in the Patriots system. Knows their calls. Can run the McOffense in an emergency, God forbid. Who has the trust of the coaching staff and the team. And I defy you to find a guy who fits that description on any of the other teams who were supposedly interested in Garoppolo. Say that and the reaction is always the same. “Yeah but (when I put words in people’s mouths they start out a lot of arguments with “Yeah but.”), if Brady gets hurt they’re fucked anyway, so what difference does it make?” That’s loser talk and I won’t stand for it. Neither will my very close pal Belichick. And if you think that way, explain to me why you have a spare tire in your trunk or smoke detectors in your house. If you have to use them, it means you’re fucked anyway. Why bother?

I’ll go a step further and say what I’ve believed since last April. That the Trent Brown deal was also part of the Jimmy G compensation. I can’t prove it. It probably violates some kind of NFL rule if it’s true. But I’m convinced Lynch and Belichick had a handshake deal on that one that they’d work out during the draft. As it turned out, the Pats dropped back from the 95th spot to 143 in exchange for a guy Kyle Shanahan had called, “the best pass protection tackle I’ve ever seen in my life” about two months earlier. And who no less an authority than Von Miller had said of him, “He’s the best right tackle in the National Football League! And he may even be a top-five tackle, period, in the National Football League. There’s not another tackle who’s that tall, that big and can move the way he moves.”

You don’t give up a guy that highly thought of to move up 48 slots on Day 2 of the draft. You do it as part of a larger deal to land your franchise QB.

I rewatched the Super Bowl over the weekend – just to prove that yes, my life is every bit the fast-paced adrenaline rush you think it is – and one thing that struck me was the first person Brady wrapped his golden, god-like, pliable arms around after Greg Zuerlein missed his kick that sealed the win, was Hoyer. 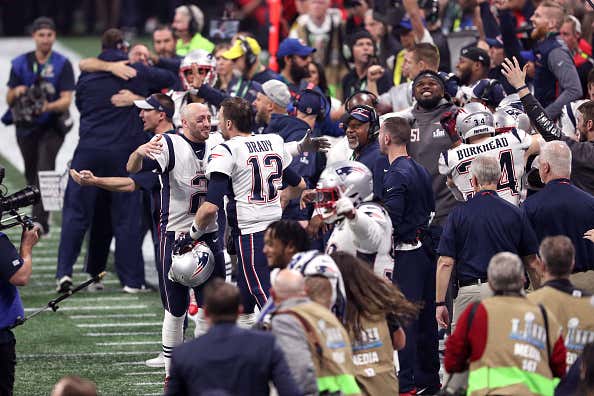 And I couldn’t help but contrast it with this:

Now by no means am I hinting at or even remotely suggesting that because Hoyer did a great job of Scout Teaming the Rams, had some insight into Sean McVay’s offense and got an emotional bro hug while Brady let Jimmy G hang  – badly – that Garoppolo wasn’t a great backup and deserves to be a starting QB in the league. Or anything close to it. I’m just saying that Hoyer’s contribution, however esoteric and hard to define, plus the addition of Trent Brown means that was a good trade for both teams.