(CBS) – Fishing villages, small boats and children at play dot the landscape along the shallow waterways of Colombia’s Magdalena River. But an invasive species left behind by one of the country’s most infamous figures is threatening the ecosystem and, possibly, a way of life.

That species? Hippos. The giants, native only to Africa, are now running wild in Colombia, reports CBS News’ Manuel Bojorquez. The story of Colombia’s hippos starts in Villa Napoles, the former estate of Pablo Escobar, who in his heyday had four hippos smuggled there for his private zoo.

Escobar’s ranch housed hundreds of exotic animals including rhinos, elephants and giraffes. By the 1980s, his cocaine empire made him the wealthiest and most feared drug lord in the world. For Colombia, it was a reign of terror. He’s said to be responsible for some 7,000 deaths. Around the time Escobar met his death in the early 90s, the government relocated most of the animals but not the hippos who were basically allowed to roam free.

“People forgot the hippos,” said biologist David Echeverri, who works with CORNARE, the environmental agency in charge of tracking and managing the hippos in the region. He estimates there are about 50 or more of them now.

What a flex from Pablo. I don’t think there’s a higher sign of wealth than a personal zoo. Anyone can have yachts, jewelry, mansions, private jets, etc., but it takes a special kind of wealth to set up a personal zoo that is later turned into an amusement park long after your demise. Smuggling four hippos from Africa to Colombia in the 1980s only to have them multiply to 50 hippos that are fucking with the ecosystem and running amok throughout the villages of Colombia is a legacy few have been able to replicate.

So far these hippos haven’t killed any humans in Colombia, at least…none that the authorities are aware of. In Africa they kill more humans than any other large animal on an annual basis. Lions and tigers have nothing on the mighty hippo. So this is a very legitimate problem for Colombia moving forward on a couple fronts. It’s like when The Simpsons go to Australia and Bart’s frog gets loose and wreaks pure havoc. Except this is real life and the frogs are the size of hippos, with the murderous rage of hippos, mostly because they’re just hippos and not frogs at all. Feels like a rather large concern both now and moving forward.

PS – How excited was the guy at CBS who got to make this graphic? 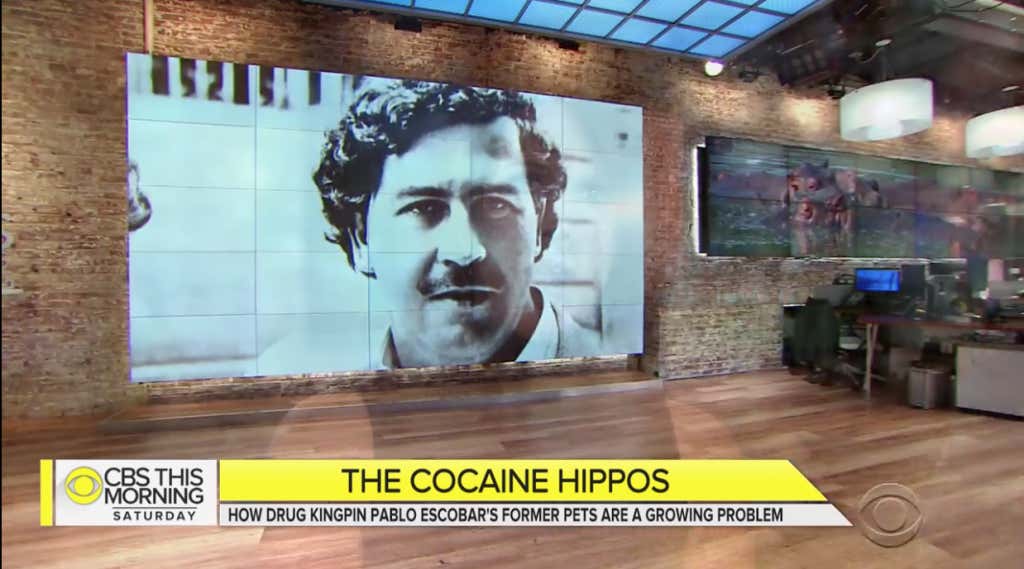 “Cocaine hippos” sounds like something Ghostface Killah would have said on SUPREME CLIENTELE.