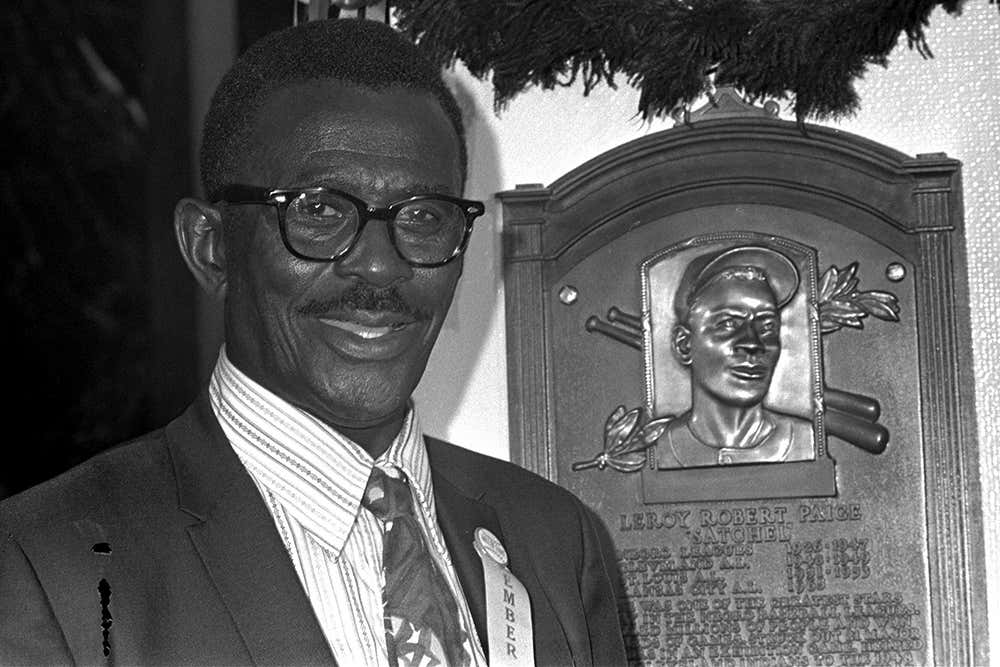 The Negro Leagues were the refuge of the black baseball player in the days before Jackie Robinson broke the color barrier. In these years of segregated baseball, there were numerous starts who did not get their chance to play in the majors but showed their skills playing in the Negro Leagues. Often these players would play in barnstorming games against major league stars, winning more than 50% of the time.

Leroy Satchel Paige was born July 7, 1906, according to most records. He earned the nickname Satchel when he would help carry bags off the train near his hometown of Mobile, Alabama. A thin wiry frame with a rubber arm, helped Satchel Paige become the top pitcher in the Negro Leagues, some suggest he may have even been the best pitcher of the era had he been given a chance to play in the majors. Paige drew large crowds whenever he pitched and was asked to pitch often and managed to dominate most of the time.

When it came time to break the color barrier, Satchel Paige was among the players that Branch Rickey considered signing, but due to his age, he was passed over for Jackie Robinson. He would get his chance a year late, signing with the Cleveland Indians and posted a 6-1 record at the age of 42. Satchel Paige spent two seasons in Cleveland three with the St. Louis Browns, making the All-Star team in 1952 and 1953, the oldest ever to make an All-Star team at the age of 47. In 1965, Satchel Paige one last Major League appearance at the age of 59, allowing just one hit while pitching three innings with the Kansas City Athletics.

The first suggestion that Satchel Paige and the top Negro Leaguers came in 1966 during Ted Williams’ induction speech, when he advocated Satchel Paige and Josh Gibson getting into Cooperstown. In 1971, that dream of inclusion became a reality when Bowie Kuhn announced that there would be a Negro League Wing in the Baseball Hall of Fame. The idea was good but poorly executed as the separate wing, felt almost like the Black Players were being segregated again. Satchel Paige was among those not happy with the separate wing, as he stated I am not going into the backdoor of the Hall of Fame. Eventually, Kuhn and the Hall of Fame would reconsider and just before that summer’s induction ceremony announced that the Negro League Hall of Famers would be given the same plaque and equal standing with anyone else chosen for the sports hallowed Hall.

Over the next few years, Satchel Paige would be joined by Josh Gibson, Buck Leonard, Monte Irvin, Cool Papa Bell, Judy Johnson, Oscar Charleston, Martin Dihigo and John Henry Lloyd. Starting in 1978 the Negro League Committee was disbanded but Negro Leaguers continued to get Hall of Fame consideration from the Veterans’ Committee. In the subsequent years, there have been many more Negro Leaguers added the roster of all-time greats enshrined forever in Cooperstown.