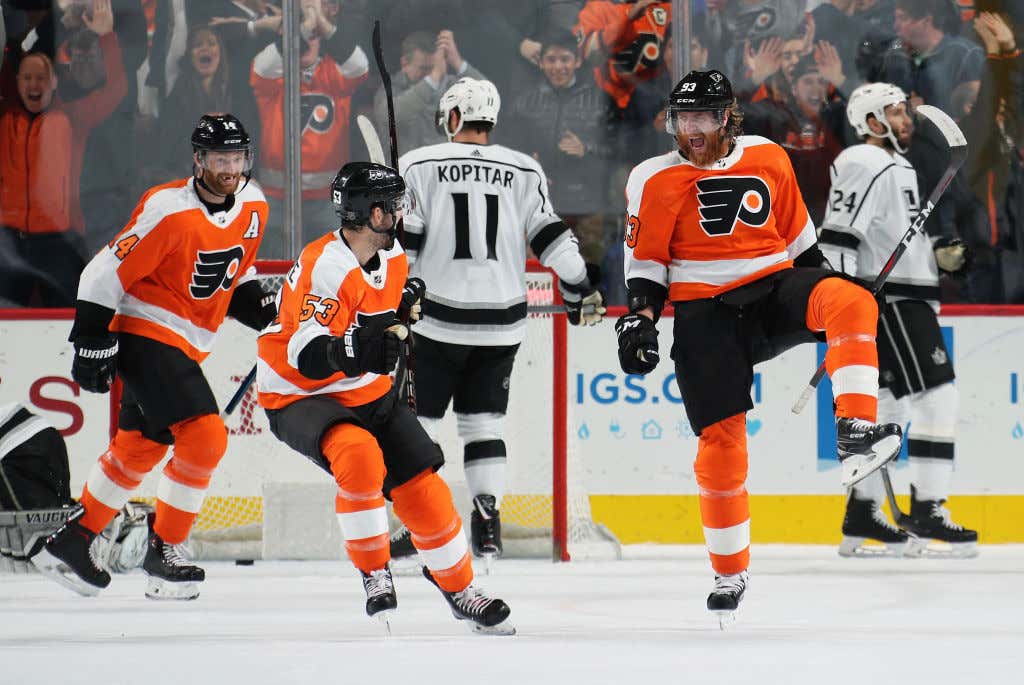 First of all–does anybody still go to an actual bank these days? I feel like that phrase is a little outdated. With mobile deposits and online banking available, I feel like the only reason why anybody would go to a physical bank these days is only if they really enjoy standing in lines. I guess maybe if you need to open up a new account you’d probably go to the bank. But that’s about it. All I’m saying is that the phrase “take it to the bank” is on the hot seat. With all that being said…

The Philadelphia Flyers men’s professional ice hockey team are going to be playing playoff hockey in 2019. And that’s a Jordie Guarantee.

I know the Flyers have had their ups and downs so far this season, and by “ups and downs” I really mean “mostly downs”. But what this team has been able to do over the last month proves that this is the exact team that we all thought they could be at the beginning of the season. All it took was firing Hakstol, firing Hextall, and making sure that both Brian Elliott and Michal Neuvirth stay out of the goddamn net. I mean just look at the difference in this team.

The Flyers were on an 8-game win streak heading into last night’s game against the Kings. It was the 2nd longest winning streak in the NHL so far this season so if they ended up losing in regulation to LA, well then it would have been a great run for this team regardless. So they’re down 2-1 with under a minute to go and everybody is thinking to themselves that it was a fun ride but the win streak obviously had to come to an end at some point. But then with 18 seconds left to go…

What a nasty cross-ice feed from Giroux

And then what a nasty shot from Jake to tuck that one past Johnny Quick to send that game into overtime. The win streak looked like it was dead on the tracks and with just 18 seconds left on the clock, the Flyers were able to make it 9 straight games gaining at least a point in the standings. That’s resiliency. That’s determination. That’s confidence and that is pure skill. All of those things were lacking from this Flyers team just a couple of short months ago. A few months ago the only identity this team had was a mentally weak hockey club that could blow a 2 or 3-goal lead at any given moment. They were a team who seemed terrified out there on the ice and they lacked any shred of confidence. Now they’re at a point where they have the confidence to know that at any given moment, they can get themselves right back into a game that looked like it was over. That’s a total overhaul in the mentality of this team. And the reason for that confidence boost clearly comes from finally getting some solid goaltending.

On Monday night, Carter Hart made this save against the Canucks.

It was just one of his 41 saves he made that night in the Flyers’ 2-1 win over Vancouver. And then last night, Anthony Stolarz made this save against the Kings in overtime.

It was one of his 37 saves he had on the night and with just 18 seconds left on the clock in overtime, it gave the Flyers a chance to win the game in a shootout. Obviously that didn’t end up being the case as the Kings eventually went on to win in the 6th round of the shootout. But the Flyers now have 2 legitimate studs in the net. Flyers fans have been dying for a goaltending tandem of Carter Hart and Anthony Stolarz. This has been the dream for this team for years at this point. And now it’s finally happening and both of these guys are giving the Flyers confidence between the pipes that this organization hasn’t had in decades.

And that’s why they’re going to be a playoff team. As long as Carter Hart and Anthony Stolarz are the Flyers’ goaltenders this year, this team has the confidence to go and grind out a win against anybody. It all comes down to mentality right now. 28 games left on the season and they only need to find a way to jump over 3 teams.

The Buffalo Sabres are always prone to imploding. The Hockey Gods are going to punish the Carolina Hurricanes eventually here. And the Flyers will bully the Penguins into submission at Lincoln Financial Field later this month. That’s all it takes and the Flyers are in the playoffs. And you see that big red “-25″ in the goal differential column for the Flyers? Well that’s what will happen if this team decides to go back to either Brian Elliott or Michal Neuvirth. Keep both of those guys out of this lineup and this is a playoff team. Play either of those two ever again and the season is over. As simple as that.

P.S. – Even though the Flyers lost in the shootout, this move from Giroux was still naaaaaasty.