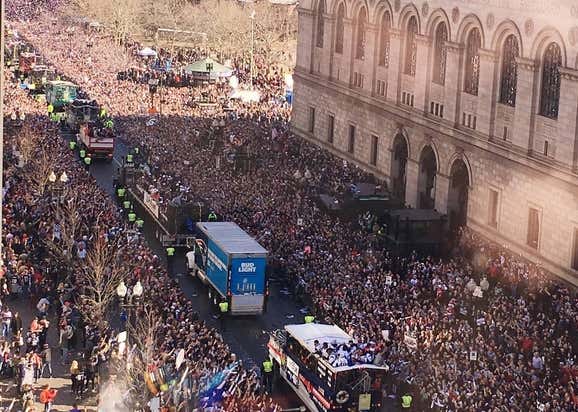 Commonwealth Magazine – It was Patriots Parade Day, a day of transportation disruption, delay, and discontent.

Patriots Parade Day doesn’t seem to bring out the best in many people. A commuter rail conductor reported that trains were left covered in litter and refuse. According to one news report, liquor-laden fans relieved themselves into bottles left for the commuter rail cleanup crew to deal with; others skipped the niceties of urinating in a bottle, creating foul puddles on the train floor.

Far be it for me to rain on someone’s parade, but these weekday mega-parade events held to celebrate sports team victories have to stop. The chaos, the intolerable inconvenience to everyday transit riders, the extraordinary and unfair burden placed on city and state resources, the unfair demands made of the MBTA and its commuter rail operator, and the (as yet) unknown costs of public safety and mobility measures all combine to make these events toxic, expensive, and borderline dangerous.

I doubt I need to say this, because I assume you know it already, but I’m a person who, at best, is ambivalent about sports. Feel free to discount what I’m saying as the opinion of someone who doesn’t have an interest in the game or its players. But even if I was Boston’s No. 1 sports fan boy, I’d be saying the same thing. …

All this because a football team won a game. … The MBTA was a victim, as were many of us, of the football team owners and players who think nothing of disrupting lives, burdening the transit system, and footing all of us with the bill. It ought to be unacceptable.

This just proves something I’ve always believed: That there is no type of fun so harmless that somebody, somewhere, isn’t going to be pissed off about it. I see 1.5 million people come into the city to celebrate on a miraculously nice winter’s day and I think of it as a pure good. At the risk of sounding like a politician giving a speech, to me it’s a region coming together. A collection of area codes, being a real a community.

But to the sorts of people who go through life believing there is way too much of you but just the right amount of themselves, it’s a hellscape. The idea of millions of sports fans in town actually enjoying themselves is nightmare fuel to the kinds of elitist snobs who’s idea of a utopia is themselves having full run of an empty city like Tom Cruise in Vanilla Sky, unbothered by the great unwashed in Julian Edelman (or last October, Mookie Betts) jerseys laughing and having a good time. Not to mention filling the pubs and restaurants on a weekday. Ask the servers, bartenders, store owners and rideshare drivers if they felt the “intolerable inconvenience” when they check their bank statements.

So the MBTA wasn’t operating on time and that the fault of, who exactly? The Patriots? The owner? The players? The horde of working class buffoons who had the audacity to invade this otherwise peaceful little hamlet? How about we blame the MBTA, since we’ve had 12 of these in a short span of time and it’s not like they didn’t see it coming. You know what T riders call a day where the trains are late, overcrowded and filthy? “Typical.”

This after all, is the same T people are encouraged to take in and out of town. The same T where a couple of years ago commuters were forced to abandon the trains and walk the tracks like cattle the day after a snow storm because 80 percent of the staff banged in sick rather than transport the public. The same T that is lousy with retired managers collecting $100,000-a-year-plus pensions for the rest of their lives. It’s a goddamned scandal. But sure, let’s blame the passengers for existing.

And when it comes to cleanliness, I must’ve missed that era when the trains were pristine and gleaming, the Hogwart’s Express of light rail. People were pissing right in the cars, you say? I seriously doubt it because there’d be a 5,000 separate videos of it all over Twitter.

But I can’t say for sure it didn’t happen, only because I’ve seen a guy piss right in the middle of a train car. At 4:30 in the afternoon in broad daylight. I was leaving my old state job, taking the Green Line out of Lechmere in Cambridge. The guy standing in front of me whipped it out and pissed on the steps leading down to the closed doors on the left side of the train while people were loading through the open doors on the right. Bear in mind, Lechmere is the end of the spur and there are no less than a dozen rail lines with out of service cars just standing there to be peed behind. So when the guy was done he zipped up and said to kind of sheepishly, “I … uh, have … a bladder problem.” So I said “Well, you certainly handled it well. Somebody else might’ve gone behind one of those other cars. But you did the right thing.” Then I turned the guy next to me and said “I should probably mention that I have a bowel problem. …” True story.

Let’s just call this what it is. It’s not just hatred of crowds and inconvenience. It’s hatred toward sports fans from people who admittedly don’t get why anyone cares about a team and would take a day off to celebrate its success. You would never hear someone get all catty like this if the crowds were in town for the Pops concert on the Esplanade, some cultural festival or a demonstration. If the Million Mom March showed up in such record numbers that the public transportation systems, there’s be hearings on Beacon Hill to find out who’s responsible. Hell, these huffy, pretentious swells are some of the same lunatics who thought we should have the Olympics here. I’m sure they’d be all about it if the crowds were coming to watch Danes and Sri Lankans throw shot puts for two weeks. But because we have them for the major sports most New Englanders care about, it’s an affront to their delicate sensibilities.

Whoever wrote this, my advice is that you move out of the region immediately. You’ve endured 12 of these things,  and I promise you there is no end in sight. Go Celtics. Go Bruins. See you in May and June.