This is HUGE NEWS.  Jeppson’s Malort is a Chicago delicacy and if you’d like the history or background on it, click the link.  But you don’t give a shit about that.

Now you might be thinking, “WSD it looks like the same shitty alcohol I drink every weekend, what’s the big deal?”

Well look no further than the bottle’s original label:

“Most first-time drinkers of Jeppson’s Malört reject our liquor. Its strong, sharp taste is not for everyone. Our liquor is rugged and unrelenting (even brutal) to the palate…we found only 1 out of 49 men will drink Jeppson’s Malört after the first ‘shock-glass.’”

And their current label:

“Jeppson Malört has the aroma and full-bodied flavor of an unusual botanical. Its bitter taste is savored by two-fisted drinkers.”

And then google “what does Malort taste like?”  You’ll find these answers:

“Malort tastes like fertilizer except it doesn’t grow on you.”

“Imagine twisting damp socks after a heavy workout and squeezing the moisture into a bottle. Fill the bottle with that, let it ferment in a warm closet. That’s Malort.”

“Malört tastes like a baby aspirin wrapped in a grapefruit peel, bound with rubber bands and then soaked in well gin.”

“But you have to earn living in Chicago. You earn it by living through those winters. And if Malört isn’t the liquid equivalent of a Chicago winter, I’m not really sure what is.”

“Subject: A stupid Chicago tradition has gone TOO FAR… This literally tastes like throw up. That is not an exaggeration. The aftertaste is just about the worst thing I’ve ever had in my mouth OTHER than the aftertaste of vomit… It was the worst liquor I’ve ever had, and hopefully my review will save you from having to endure this STUPID tradition. If someone ever calls you un-manly…”

“It tastes like someone vomited up their gin and now you’re drinking it from a shoe.”

“It’s like swallowing a burnt condom full of gas.”

“When you’re putting your kid’s shoes on and it’s getting to be time to replace them—the way they smell is how Malört tastes.”

I personally go with a much simpler description: “Bug spray”

So yeah, as you can tell by some of the descriptions above, we’re about to make this into a long running joke at Barstool Chicago where we drink Malort daily and buy you guys shots of it every time we’re in public.  Did you think us pushing Italian beef has gotten annoying?  Just wait until Malort is all moved in down in Pilsen again.  We’re talking live shows, events, tours of the distillery and more.

And guess what? I bought a bottle from Mariano’s this morning.

And I’m going to demand that each of my coworkers take a shot of it on their arrival to the office today so I can document their reactions via twitter and IG.  But before we get there, here’s how each of them will react to looking at the bottle and my proceeding peer pressure to drink it:

He probably won’t take it and will say he’s sick or some shit.  He’s be like “awwwww nawwwww I’m not taking that, I’m still sick from snowmobiling this weekend and I gotta get home soon duuuuuuude.”

He’ll give some long, drawn out response and make it a much bigger deal than it is and basically tell me to fuck off without actually telling me to fuck off.

Also, back in mid-December the Spittin Chiclets crew came to Chicago for a live show.  They only got about 1 billion people to come out to it, no big deal.  They’re a fucking power house of a podcast.  But they didn’t take too kindly to Malort when they met us at Declan’s later that evening: 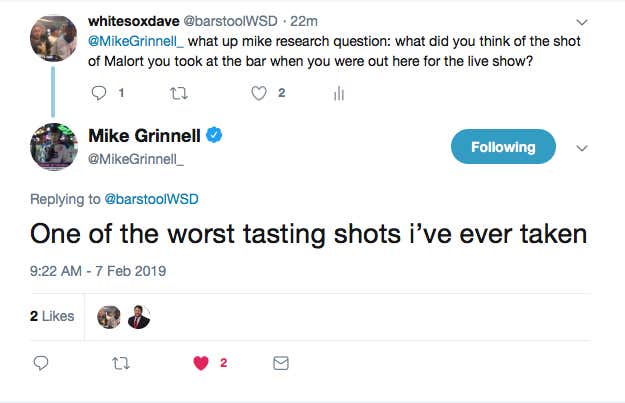