So these are the two tweets that set everything off last night. Well, actually, it was Kansas losing another game on the road but we’ll get into that here shortly. Naturally this sort of statement, which I’ll defend my points on, brought some push back. Kansas fans are nuts, but typically are fun to engage with because they love the game so damn much.

Now, what it also did was bring in SB Nation. Specifically the Kansas SB Nation site who made the most outrageous claim I’ve been a part of – and I’m a guy who once convinced myself Ryan Harrow was going to be an All-SEC player. 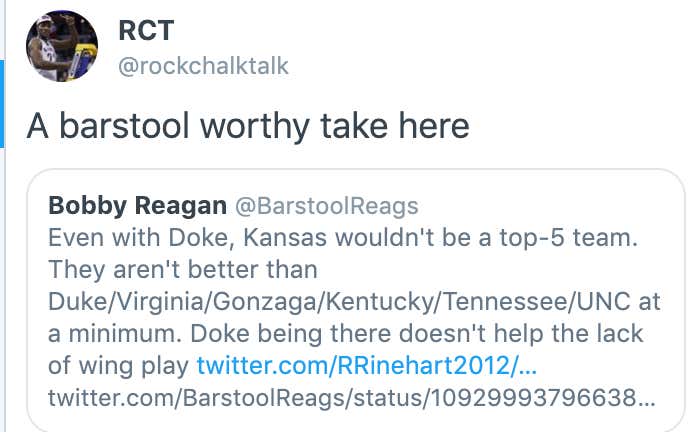 No surprise with that sort of response. People like to think just because we work for Barstool we’re incapable of knowing sports or making normal claims. I can almost guarantee I know this game better than ‘rockchalktalk’ whether it was playing it (yes, shockingly I played at a fairly high level even if I don’t look the part now as a 31 yera old), coaching it (did that), watching it or just having a brain. I win all of those. How do I know? These were his follow up tweets: 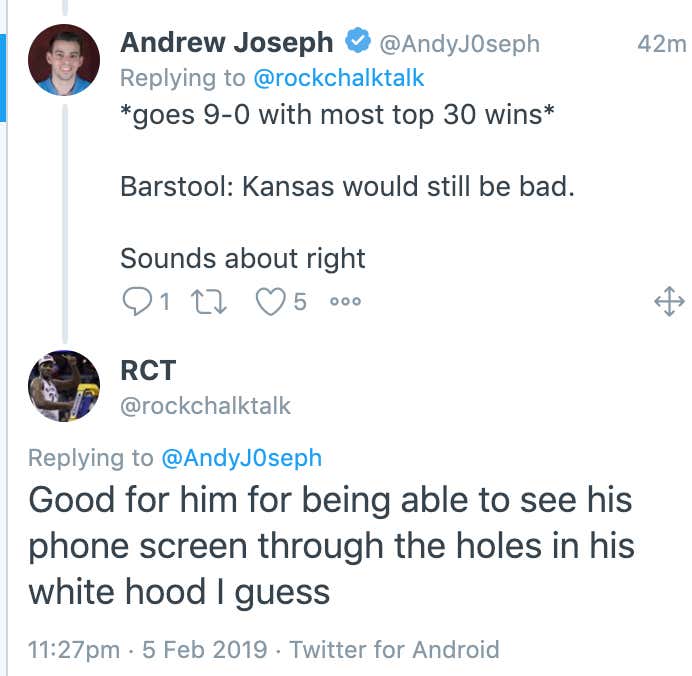 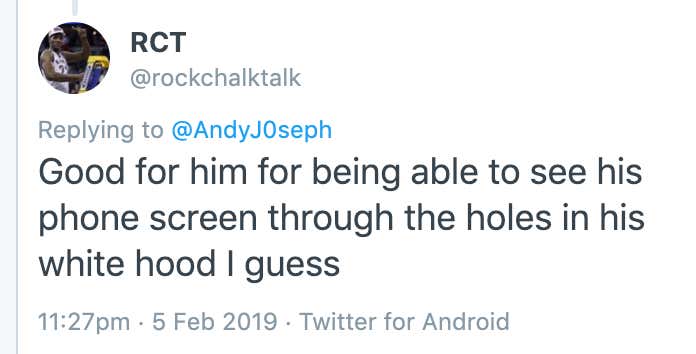 Ah, yes. I’m racist for well, I have no idea? I’m assuming it’s the old retort of just assuming anyone associated with Barstool must be a racist. Really it just shows that RCT here has no brain. I mean imagine this being your response to someone saying your team wasn’t a top-5 team.

I do feel bad for RCT. Knowing that you work for a company that has a track record of this stuff: 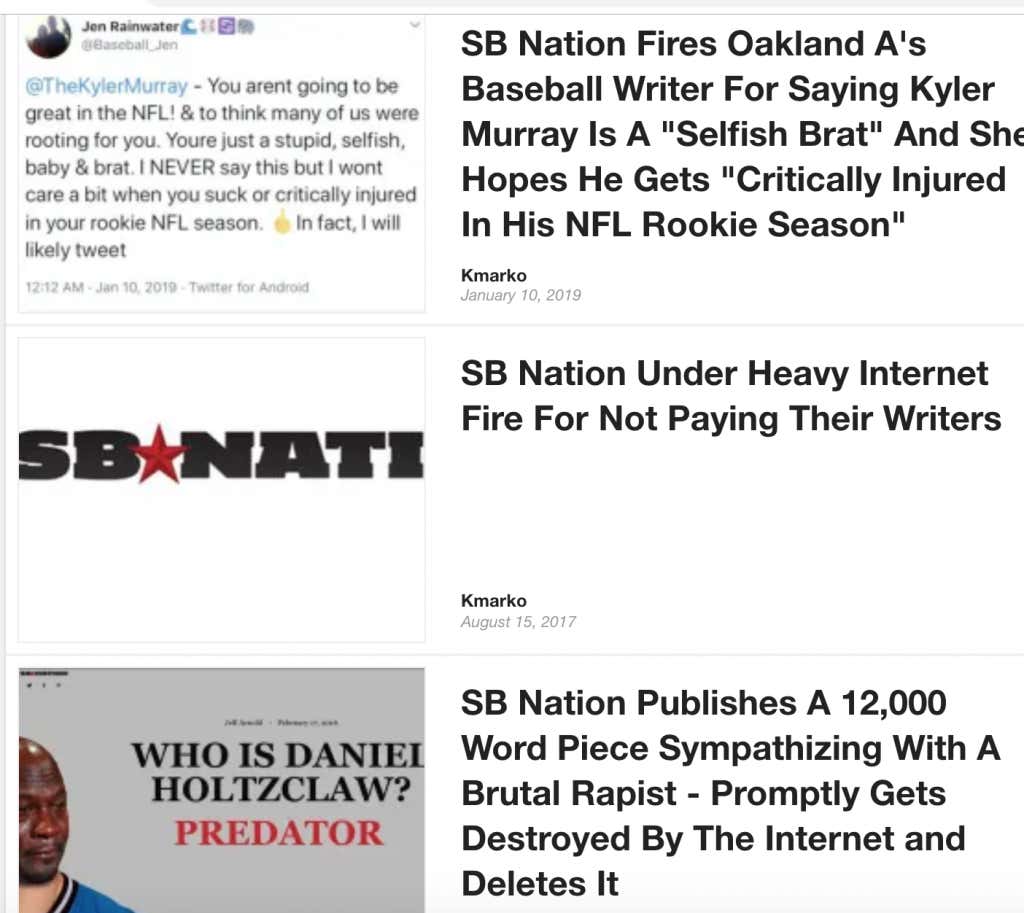 I mean that’s how it works, right? I’ve been told that I need to be judged for something that Barstool wrote nearly a decade ago so we need to judge RCT for the same, right? I don’t even hate all of SBNation, I’m friends with some of their college basketball guys and I know other people are Barstool are as well. Funny how you can separate two different things under one umbrella.

I don’t even necessarily care I was called a racist (it makes a great headline). I get called crazy things all the time because college basketball fans are lunatics and it’s part of why I love college hoops. But, sitting here discussing Kansas as a top-5 team turned into me being a racist warranted some sort of response.

Now since I’m just some ‘dumbass blogger’ that ‘doesn’t watch college basketball or know the game’ let’s talk about Kansas here since people like to think I’m a racist for having a normal take. Back in December I wrote the following:

But, let’s get to Kansas here. This is the story. Kansas was the No. 1 team in the country, simply because, well, I don’t know. If you want to tell me Kansas had the best resume I wouldn’t argue, but they weren’t the best team in the country. Just watch them play. They needed Lagerald Vick/Dedric Lawson to absolutely bail them out against New Mexico State/Villanova/Stanford. There are absolute holes with this team – most notably being where the hell is Quentin Grimes.

The writing was on the wall. Yes, Kansas had/has a pretty impressive resume with wins over Michigan State, Tennessee and Marquette on a neutral court. But, you could see where the problems were and having Doke wasn’t going to help it.

First, Lagerald Vick was shooting 50% from three and playing like an All-American. That was never going to last. Vick has been one of the most inconsistent players during his career at Kansas and we’re seeing it happen now. Doke doesn’t all of a sudden give Vick consistency. He was never going to be one of the 10 best players in the country all season.

The freshman duo of Devon Dotson/Quentin Grimes was a major problem too. Grimes looked the part in the first half against Michigan State – the 1st game of the season. People remember that and tie it into Doke’s success. The fact is Grimes regressed majorly after that 1st half. In the next 10 games he hit double digits just twice.

The fact is the wing/guard play was never developing with or without Doke out there. That’s why Kansas wasn’t a top-5 team despite having those wins. Let’s say Doke was healthy, I’d still take Duke/Gonzaga/Virginia/Kentucky/Tennessee/Michigan over them right now. I know people will say they beat Tennessee. I get it. But, I also think it’s dumb to judge everything on one game – especially one that was an overtime game on a neutral court. Again, go back to Kansas regressing from wing/guard play while Tennessee seems to progress there.

Finally, let’s talk about the schemes on each side of the ball with Doke out there. Right now Kansas is running the 4-out, 1-in offense based around Dedric Lawson. On offense this fits Lawson better – who is the better talent than Doke. With Doke out there they’d be running the hi-lo set and keeping Lawson more in the high post. He’s at his best when he catches the ball in the mid-post and can make a move to the little jump hook he has in the low post. He needs room to operate that. Putting Doke out there adds another guy in the paint that doesn’t have to move since Doke doesn’t step out more than 7 feet. It gets congested. Is it worth Doke’s ability to finish at the rim to take away touches and space from Lawson?

Defensively you now have 2 bigs that aren’t great perimeter defenders. Teams would just be putting those two guys in high ball screens. Yes, rebounding would be better but that’s not why Kansas is on this road losing streak. Outside of the Kentucky game they haven’t been outrebounded. Kentucky was the only team that killed them on the boards without Doke and well Kentucky kills most teams on the boards.

With Doke they were/would be the 7th best team in the country. Without him they are somewhere around 12-15. That’s just facts. Sorry, SB Nation, I’d be frustrated too if I were you.