NHL- The Toronto Maple Leafs announced today that the club has agreed to terms with forward Auston Matthews on a five-year contract extension. The average annual value of the contract is $11.634 million.

Matthews, 21, has appeared in 38 games for the Maple Leafs this season and registered 23 goals and 23 assists for 46 points. He skated in 62 regular season games for the Maple Leafs in 2017-18 and registered 63 points (34 goals, 29 assists), while adding a goal and an assist in seven Stanley Cup playoff games. In 182 career NHL regular season games, he has recorded 178 points (97 goals, 81 assists), while registering seven points (5 goals, 2 assists) in 13 career Stanley Cup playoff games. In 2016-17, Matthews captured the Calder Trophy as the NHL’s Rookie of the Year and was named to the NHL’s All-Rookie Team after establishing Maple Leaf rookie records for goals (40) and points (69) in a season, which led all NHL rookies in both categories. In his NHL debut on October 12, 2016 at Ottawa, he set a new NHL record for goals scored in an NHL debut with four. The Scottsdale, Arizona native has also represented Toronto at the NHL All-Star Game in three consecutive seasons (2016, 2017, 2018).

BOOM. And there it is, the first domino falls in the Toronto Maple Leafs contract dilemma situation. Auston Matthews locked up for the next 5 years with an AAV of 11.634 million.

At first glance, I love the deal for both sides. Matthews gets paid like one of the top players in the league for the foreseeable future and the Leafs aren’t locked in for 8-years. Granted, he is going to get about double when he signs at the end of the 5-year deal so that probably isn’t a good thing. It will also be around the same time William Nylander’s deal is up, but I can’t imagine he’ll make it the full six years in Toronto.

The deal makes Matthews the 2nd highest paid player for 2019, behind only Connor McDavid (according to spotrac) 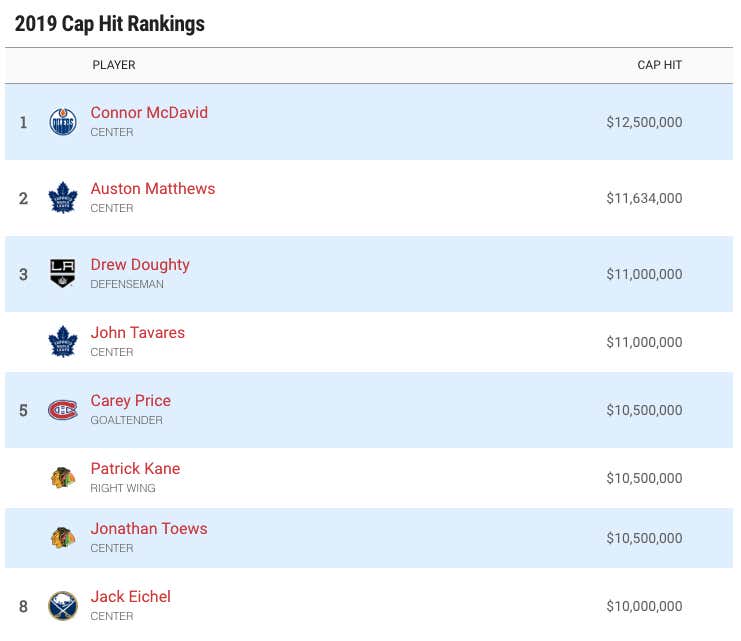 Good for Matthews. Kid went and got himself paid. The Leafs are off tonight and have a home game against one of the worst teams in the NHL tomorrow night. Matthews has every right to go get absolutely crushed tonight and enjoy every penny of that new deal.

Now it just comes down to Marner. If Kyle Dubas and the Leafs can find a way to get a deal for Marner done and they have Tavares, Matthews, Marner, Rielly and Nylander all locked up for the foreseeable future, the rest of the NHL should be pissing themselves. Certainly won’t be easy though.