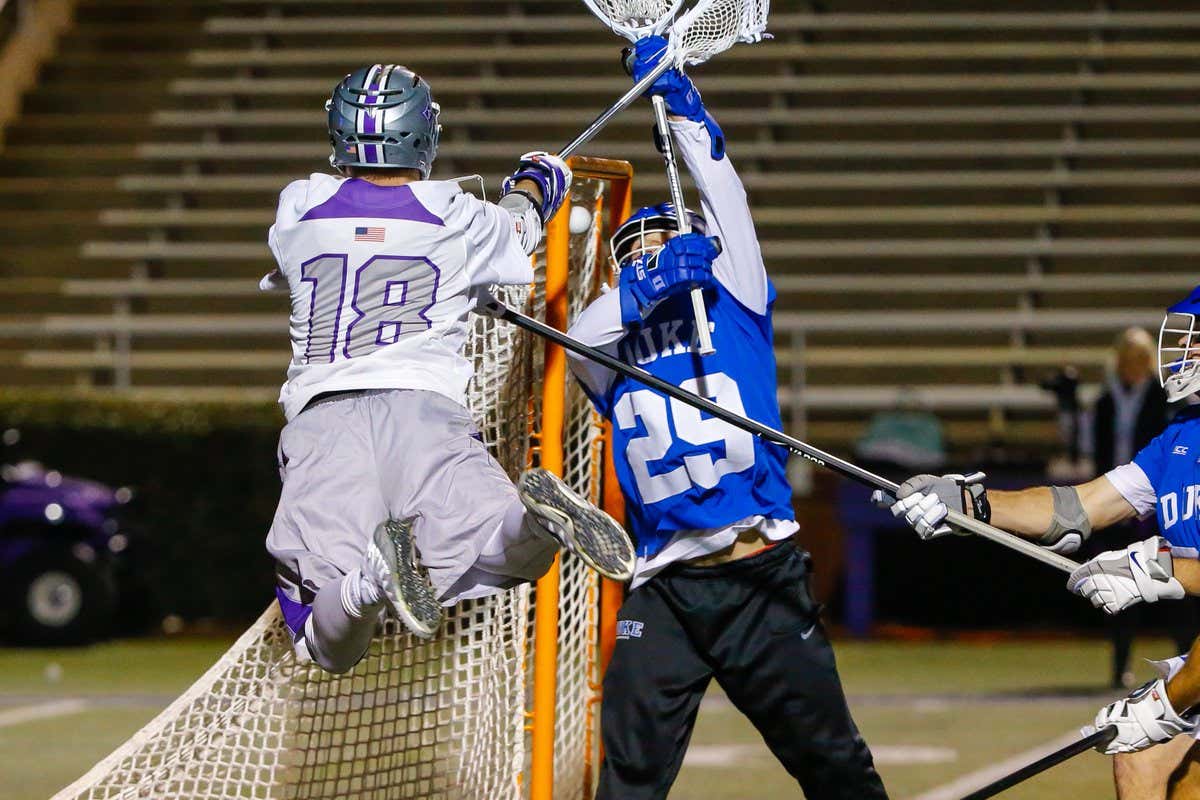 The 2019 NCAA Lacrosse season got underway this past weekend and it was obviously the biggest moment in sports of the weekend. You could either watch a couple of professional football teams forget how to play offense with a Maroon 5 concert sandwiched in the middle of the game. Or you could watch the Sport of the Future kick off one of its most important seasons to date. The reason why this season in particular is so important to the sport of lacrosse is because of the new rule changes that came to the college game.

This year, college lacrosse will feature a shot clock which will keep the pace of the game moving, and that is ultimately great for the game because it makes it better for television. And then the Dive? Well it is very much alive. Yes, the crease dive is now legal in college lacrosse which means that you’ll be seeing the fellas go airborne every chance they get. The crease dive is easily the most electrifying play that lacrosse has to offer. Think about how much dunking revolutionized basketball. The same will go for the dive in college lacrosse. There are a bunch of aspects about lacrosse that you have to already be a huge lacrosse fan to truly appreciate. But the crease dive isn’t one of them. These are highlights that any sports fan in the world can appreciate, and the haters are absolutely furious about it.

So with that in mind, I figured we can highlight all the best dives from each weekend of college lacrosse this season. Starting with…

Teams that heavily recruit Canadians are going to be an absolute nightmare to play against this year considering all of those guys have been going airborne since they first started playing the game. The crease dive is an essential part of box lacrosse so for a kid like Rob Hudson out of Oakville, Ontario? There’s nothing new or special about this rule in college lacrosse. It just means he gets to dive onto turf instead onto a less forgiving sports court surface.

And this move right here is exactly what is going to make playing against Canadians so miserable for defenders. 32 on Utah has most likely been taught his entire career to keep dodgers underneath. Don’t give up top side. So Rob Hudson sets up a high wing dodge and #32 is just trying to keep him down the alley. Little does he know, he’s playing right into Hudson’s trap. Because he never wanted to sweep in the first place. He just wanted to get under and then take flight across the crease. It’s a thing of beauty right there.

Like I just mentioned–Canadians who have played box lacrosse their entire lives are definitely going to have an upper hand this season when it comes to launching off across the crease. But what you’ll start to see more and more of is American players starting to pick up the box game. Obviously the biggest benefit to playing box is to work on your hands and finishing in tight spaces. But getting some extra practice with the dive sure as shit doesn’t hurt either.

Lucas Spence is a local kid here in the Philly area and started playing box this past summer. Think it’s any coincidence he decided to take flight here? Not a chance. He knew he was diving the moment he set up that dodge. Usually attackmen are taught to get somewhere around that 5&5 when dodging from behind before hitting their inside roll.  Instead of getting higher above the goal, though, Spence decides to set himself up a little wider, hit the inside roll at GLE and then it’s time for liftoff. No idea why the refs waved that goal off though because that’s a picture perfect dive to me.

To really appreciate this specific dive for all it’s worth, first you need to know a little background on Adam Charalambides.  He was the Big Ten Freshman of the Year in 2016. He then missed the entire 2017 season with an ACL injury. He worked his way back after the first ACL injury but then suffered another ACL injury in the 2018 preseason that forced him to miss that entire year as well. So he’s missed the past 2 full seasons dealing with injuries, came back for the first time last weekend and put up a hat trick for Rutgers.

So it may not have been the smoothest crease dive of all time. But the knee looks healthy on that dodge and then getting some air time there was just the icing on the cake.

#2. Nick Shaw | Providence vs Boston U

Here’s what makes the crease dive so greasy and so special. You know you’re going to take some contact anytime you decide to dive across the front of the goal. If you aren’t about to get absolutely smoked by a defenseman, chances are you wouldn’t have to dive in the first place. So Nick Shaw knows he’s about to get smacked here. He knows he’s probably going to have a date with the trainers room after this game is over. But he still puts his shoulder down and decides to take off anyway. Heart. Balls. Grit. That’s what the crease dive is all about. It takes copious amounts of all 3 of those things to send it like that, and Nick Shaw clearly has all 3.

The college lacrosse season was about 24 hours old when this goal was scored and there’s a very strong chance that this ends up being a top 5 play of the entire season. What a mad lad Carson Sorrells is. Takes the push from behind, runs out of real estate, realizes his only option left is to take a quick flight across the crease and finds a way to dunk it past Turner Uppgren as he’s falling behind the cage. Unfortunately he would have needed to do this at least 9 more times in order for Furman to pull off the upset over Duke to start the season and the Blue Devils got out of there with a 17-9 win. But I’m a firm believer that goals this filthy should at least count for 2.

If that’s just the start of the crease dive in college lacrosse, then we are in for 4 months of absolute mayhem coming up here. I just feel terrible right now for anybody who blindly hates the sport. Think of all the highlights they’re about to miss out on. It’s a shame. A modern day tragedy.

P.S. – Wasn’t a crease dive but this assist from the Vermont/Utah game on Friday night was too disgusting to not include here.