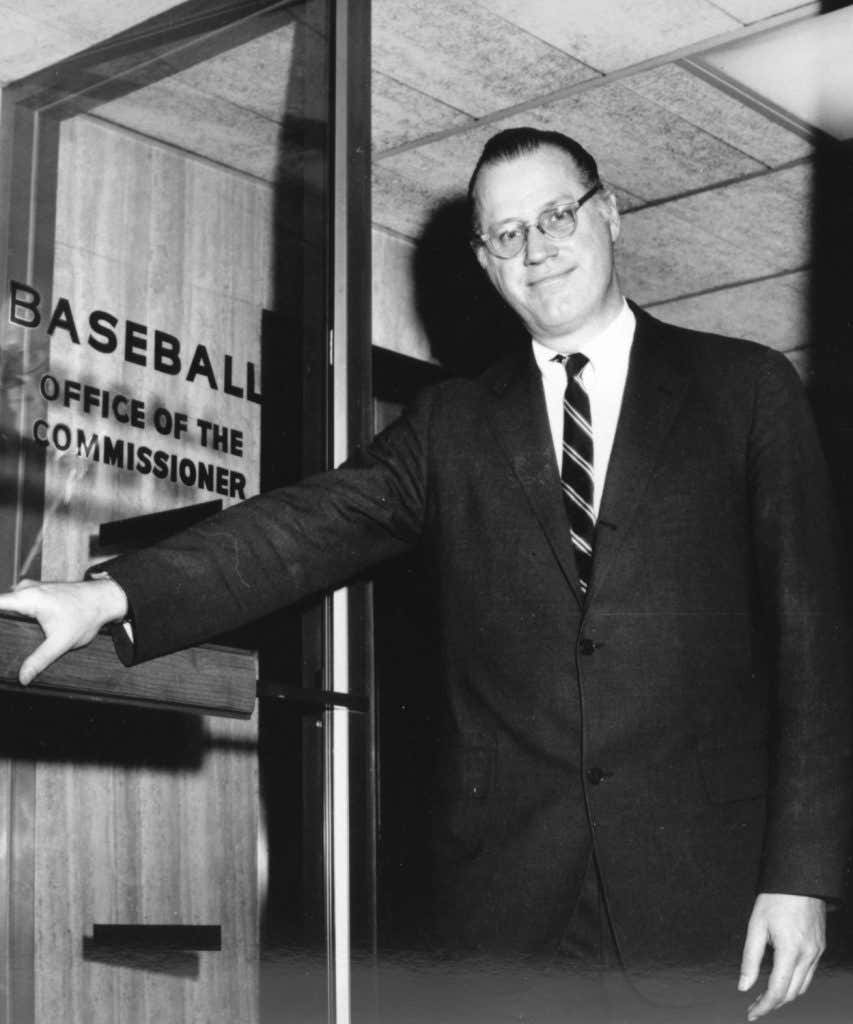 Bowie Kuhn is elected as the new commissioner of Major League Baseball, replacing William Eckert who had been forced out following the 1968 season. Kuhn was a Wall Street Lawyer, had represented the National League when they were sued by the City of Milwaukee to prevent the Braves from relocating to Atlanta. Bowie Kuhn would serve for 15 years through some of the most tumultuous years in the game’s history.

Bowie Kuhn was born on October 28, 1926 in Takoma Park, Maryland. After completing the naval officers training program, Kuhn attended the University of Princeton, moving on to University of Virginia Law School. After passing the bar in 1950, Bowie Kuhn was hired by Wilkie, Farr and Gallagher a cooperate law form based in New York City. The law firm would become the legal counsel for the National League, giving Kuhn keen insight into the business workings of baseball. Something his predecessor in the commissioner’s office William Eckert, lacked when he replaced Ford C. Frick in 1965.

William Eckert on the other hand had no experience with baseball when he became commissioner in 1965. He was a career military man who was the youngest three-star general in the history of the armed forces, as he was among the hierarchy in the early years of the Air Force after it was spun off from the United States Army Air Corps. When Eckert was named commissioner, he had not seen a baseball game in ten years due to his extensive military service. Often it was clear that he was wrong for the job as the changing as he was unpopular with both players and owners. In 1968, William Eckert incurred a great amount of criticism when he refused to postpone games after the assassinations of Martin Luther King, and Robert Kennedy. This led to a no confidence vote from owners worried about a potential strike by players in 1969. With the loss of the owners’ support Eckert had no choice but to resign.

Bowie Kuhn was the fifth commissioner of baseball, who at the time of his election was the youngest commissioner at the age of 42. Kuhn experience in cooperate law and his work with the National League would come in handy as baseball over the next ten years went true seismic changes and labor battles. Kuhn was among the strongest commissioners to ever serve Major League Baseball, as he halted potential deals that sent Rollie Fingers to the Boston Red Sox and Vida Blue to the Yankees, because they were not in the best interest of baseball. His tenure saw an end to the reserve clause and the start of free agency.

At the end of his career, Bowie Kuhn over saw the early growth of cable television, and the influx of drugs in the game. His hardline stance against gambling and drugs would ultimately lead to end of Kuhn’s tenure as commissioner as he had leveled bans against Mickey Mantle and Willie Mays for doing work with a casino after their playing careers were over, forcing Mantle out of a coaching job with the Yankees and Mays out of a coaching job with the Mets. This made owners uneasy as they chose not to give Kuhn another term, though he stayed on a few months extra as his replacement Peter Ueberoth finished up his duties with the 1984 Summer Olympics in Los Angeles.