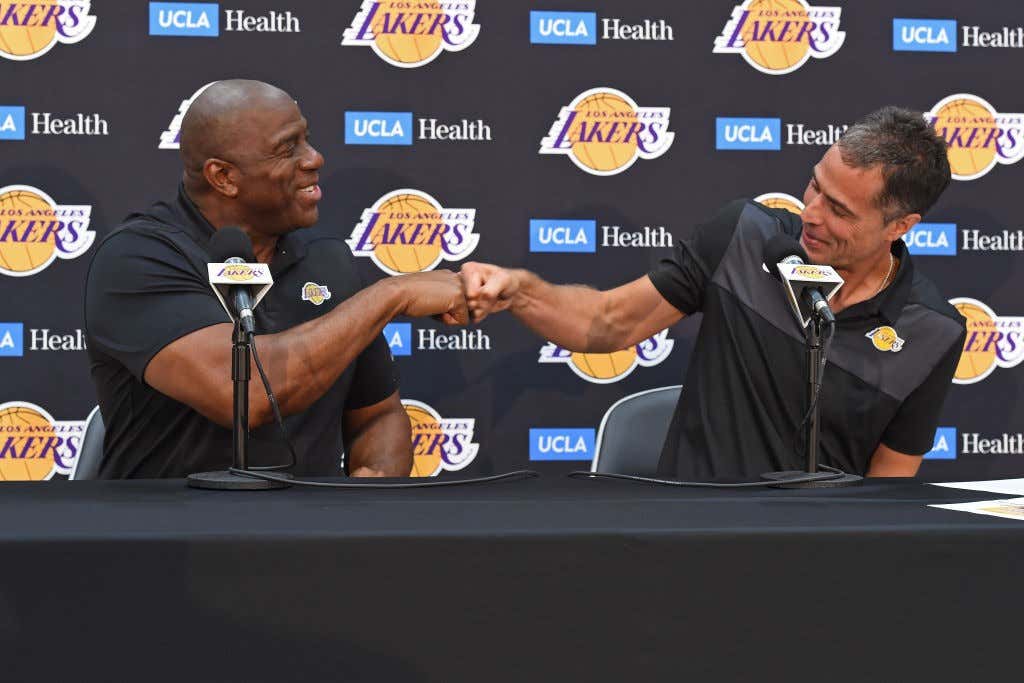 No wonder Dell Demps didn’t want to answer the phone when the Lakers were calling. Look at that offer! This is like when you’re messing around in 2K and you turn the trade restrictions off. Magic and Rob Pelinka are aware of who they are trying to acquire right? After hearing that “all” the Lakers young pieces were on the table, the first official offer was Ball/Kuzma/Rondo/Beasley and a first round pick? Why on earth would the Pelicans blow their load early for that package? Now it makes sense as to why LeBron and Rich Paul have been working the media like this, they know their current offer is hot garbage. So as Shams then explains it may actually have been pick any two from Ball/Ingran/Kuzma/Zubac/Hart as if that was supposed to make things any better. Put yourself in the Pelicans shoes right now, on one hand you have a team like Boston that was pretty adamant that Demp’s could literally pick whatever he wanted from all their assets if they just held out. They’re able to provide that combination of young talent and multiple first round picks, things that a rebuilding team will need in a post AD world. Then you have the Lakers who are only giving you 1 pick and two young players? Players that may not even be that good? Thank you Magic, thank you!

This is just a classic case of a GM trying to buy low by destroying the market. Deep down the Lakers had to know this wasn’t going to get it done right? I guess shoot your shot and then hope you can let the media pressure force the Pelicans hand, but I feel a whole hell of a lot more confident about things now that we know what LA had on the table. What does NO want with Rondo/Beasley? On top of that, if that trade were to happen, then how good could that one pick possibly be? I think we all agree the only way the Lakers were going to put serious pressure on the Pelicans is if they put everything on the table and this offer certainly does not reflect that. You simply cannot look at that offer objectively and say the Pelicans should take this deal, anyone with a brain can see that.

It’s also notable that they left out KCP for a couple reasons. First being, he has a no trade clause since he signed a one year deal with Early Bird rights. Perhaps they don’t think he would accept this trade by waiving his clause. There’s also the fact that he too is a Rich Paul client at Klutch Sports, so you could interpret it as LeBron wanting to keep his friends around him for the good times even if it made their offer not as strong. Now to be fair, you always have to factor in the posturing that is happening from both sides. There’s a reason Shams and Woj have different tweets, and that’s probably because they’re getting leaks from both sides. Woj is an Ainge guy, Shams Lakers so you have to take this with some grain of salt. If they know of the other offers, why weren’t those mentioned?. But the one thing they agree on is the fact that the Lakers chose to not offer multiple picks or salary relief for NO while also not including all their best young talent. That’s the laughable part, and honestly I wouldn’t expect anything less. LeBron and Magic think just because they are the Lakers then people will cave to them. If I were a Lakers fan I’d be bullshit, especially with everything on the line like this. You come that soft initially and who knows maybe it ruins everything, sort of like when you put in a super low offer on a house and the seller gets offended and doesn’t even counter. They go right to a different buyer who has a stronger offer. I suppose you have to start somewhere in a negotiation, but this seems like one of those times you come right in with your best and final to try and lock it down. Especially when you’re trying to convince a team not to wait until the summer, I feel like that’s not rocket science.

I have to admit, I was getting a little nervous given all the chaos over the last few days, but this was a nice reminder that Magic may have no fucking idea what he’s doing, and this offer is the proof.