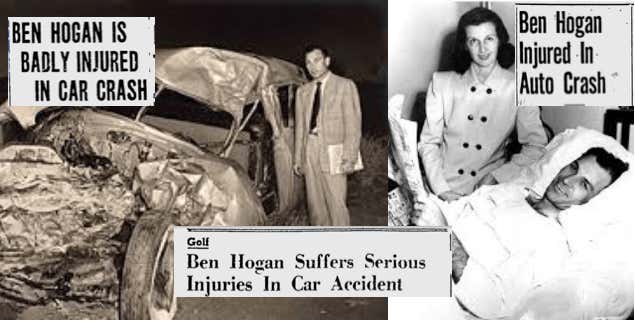 Ben Hogan, who was the top money winner on PGA Tour in 1948, winning the U.S. Open and PGA Championship is severely injured in an early morning car crash in Van Horn, Texas. Hogan Hogan suffers a multitude of injuries, including a broken collar bone, broken ribs, broken pelvis, and a broken ankle. Doctors predicted he would never walk again, but Ben Hogan returns in 1950 win the U.S. Open.

Ben Hogan was born on August 13, 1912, deep in the heart of Stephenville, Texas. Turning professional right at high school, Hogan was hardly an overnight sensation as he struggled through his first decade and lived in poverty while working as a club pro in Texas. In 1940, Ben Hogan finally tasted victory and soon became addicted to winning, as he won three straight tournaments the first of his career. Over the next three years, Ben Hogan who lived with his wife’s family became the PGA’s top money winner in 1940, 1941 and 1942 before serving in the U.S. Army Air Forces during World War II.

After returning from the service, Ben Hogan picked up where he left off, and was the PGA’s leading money winner again in 1946, winning the PGA Championship for his first major title. In 1948, Ben Hogan had his best season to date, winning his first career U.S. Open title, and winning the PGA Championship for the second time as he was the tour’s leading money winner for the fifth time. Hogan was off to a great start in 1949, winning the Bing Crosby Pro-Am and the Long Beach Open in January.

In the early morning hours on Ground Hog’s Day in Western Texas, Ben Hogan was driving home to Fort Worth with his wife after playing in Phoenix Open over the weekend. There was dense fog in the air, and the Hogans were driving cautiously. Coming in the opposite direction was a Greyhound bus, that was behind scheduled and looking to make up time. Going over a bridge the bus driver chose to go down the wrong side of the road to get around a truck. Ben Hogan was coming down the other side and neither saw each other due to the fog. At the last second Ben Hogan saw the headlights of the bus but was unable to get out of the way due to a concrete barrier, so he dove across his wife Valerie on the passenger seat as most cars at the time did not have seatbelts. The dive protected his wife from injury and saved himself from certain death. Valerie Hogan was able to get out of the car and was seen yelling at the doctor, as it took 90 minutes for an ambulance to arrive and two and half hours to get Ben Hogan to a hospital.

First reports of the accident were sketchy, as early reports stated that Ben Hogan had been killed. The injuries were plentiful as Hogan suffered a double fracture of the pelvis, broken ribs, a broken collar bone, and a broken ankle. In addition, he suffered potentially fatal damage to his internal organs and damage to his left eye. Doctors feared Ben Hogan would never walk again as spend two months in the hospital. After getting out of the hospital, Hogan recovered by walking daily to regain his strength and was able to get back on the golf course in November.

In 1950, Ben Hogan defied the odds returning to the PGA Tour, losing the Los Angeles Open in a playoff to Sam Snead upon his return. He would go on to win the U.S. Open, in what was called “The Miracle in Merion”. Hogan played a limited schedule over the remainder of his career, winning his first Green Jacket in 1951 as he repeated his U.S. Open Championship. In 1953 at age of 40, Ben Hogan won three major titles, winning a second Masters, a fourth U.S. Open and the Open Championship. It was the only time that Ben Hogan that he would compete in the Open Championship, becoming the first golfer to win three majors in the same year.

Ben Hogan would only win one more title the remainder of his career, though the nine major championships were ranked second to Walter Hagen for most all-time at the time. Hogan’s nine titles are still tied with Gary Player for fourth, behind Hagen, Tiger Woods and Jack Nicklaus.

The injuries Ben Hogan suffered that day in West Texas, would bother him later in life he dealt with circulatory issues and worsening vision before he passed away at the age of 84 in 1997.