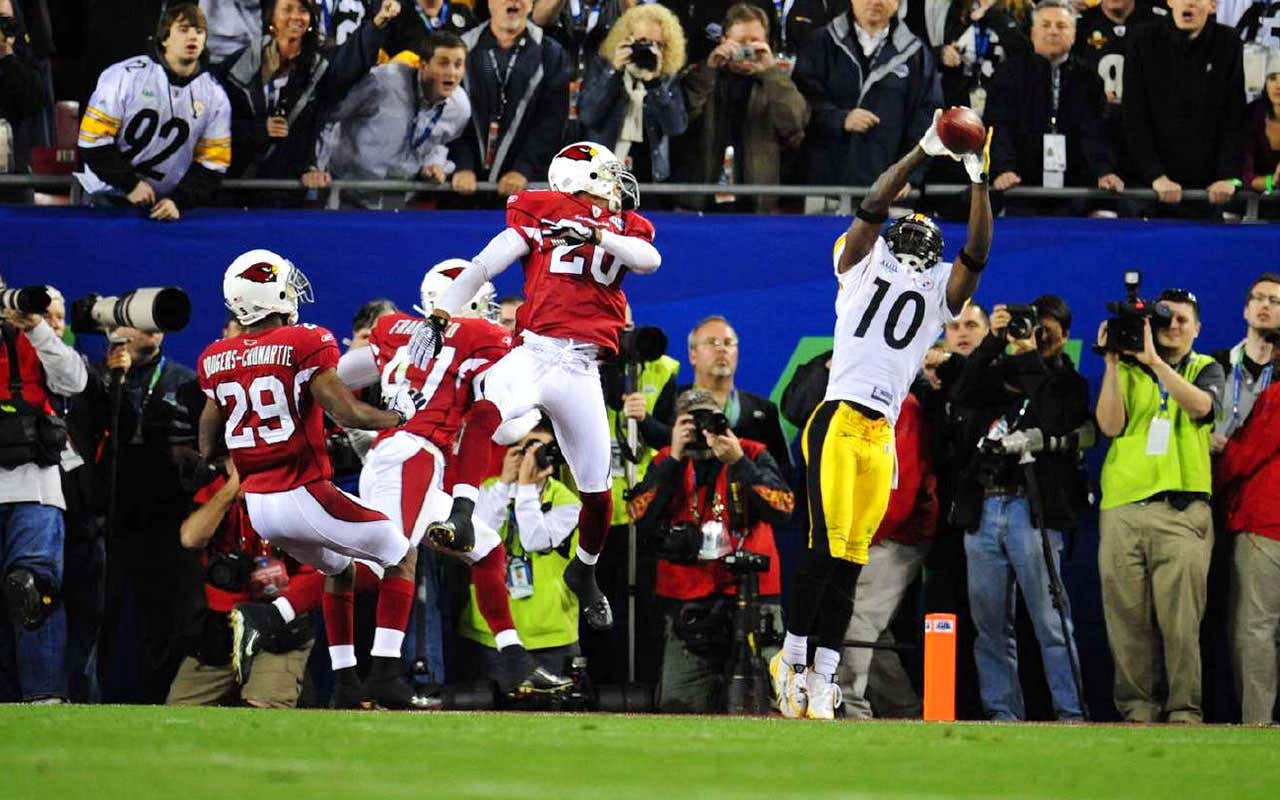 The Pittsburgh Steelers become the first team to win six Lombardi Trophies, beating the Arizona Cardinals 27-23 in Super Bowl LIII in Tampa. The Cardinals had staged a head-spinning comeback, scoring 16 points in the fourth quarter to take the lead. However, the Steelers drove down the field and won the game with 35 seconds left as MVP Santonio Holmes made a top tapping catch with 35 seconds left to win the game.

This was a Super Bowl of contrasts as the Pittsburgh Steelers were the NFL’s symbol for stability with Mike Tomlin become just their third coach since 1969 one year earlier to replace Bill Cowher who stepped down to focus on his family after leading the Steelers for 15 years. Tomlin guided Pittsburgh to a 12-4 record in 2008, beating the San Diego Chargers 35-24 and Baltimore Ravens 23-14 on their way to Tampa Bay.

The Arizona Cardinals meanwhile had been the NFL’s poster child for losing. Prior to the 2008 season, the franchise that had been an NFL original had just two playoff wins 51 years apart in 1947 and 1998. Where the Steelers came into Super Bowl XLIII with five Lombardi Trophies in six appearances, the Cardinals were making just their fifth playoff appearance in the Super Bowl era after they won the NFC West with a record of 9-7. It was the first division title for the Red Birds since 1975. The Cardinals were led by Kurt Warner at quarterback. He once was an overnight sensation with the St. Louis Rams, going from bagger and NFL Europe to Eli Manning’s personal tutor to being seen as washed up in the desert before his career rose for one last great chapter in guiding the NFL’s least successful franchise on their greatest postseason run. The Cardinals were coach by Ken Whisenhunt who had been on Cowher’s staff in Pittsburgh but lost a chance to take over when the Steelers chose Mike Tomlin. The Cardinals playoff road saw them fly past the Atlanta Falcons 30-24 in their first home playoff game since 1947 when they played at Comiskey Park in Chicago. They then stun the Carolina Panthers 33-13 on the road, before return home to beat the Philadelphia Eagles 32-25 in the NFL Championship Game.

The Steelers received the opening kickoff and drove right down the field, and appeared to have scored a touchdown on a one-yard run by Ben Roethlisberger, However, a replay showed he was down short of the goal line as Jeff Reed kicked an 18-yard field goal. After the Cardinals failed to move the ball, the Steelers again drove down the field and this time punched the ball in on a one-yard run by Gary Wilson at the start of the second quarter to make it 10-0. Kurt Warner was able to get Arizona back in the game with a 45-yard pass Anquan Boldin that got the ball down to the one, setting up a touchdown pass to Ben Patrick. The next two possessions each ended with punts, with the Steelers getting the ball with just over two minutes left. However, Roethlisberger made the game’s first mistake as he was picked off by Karlos Dansby, setting up the Cardinals at the Pittsburgh 34. Arizona drove the ball down to the one, looking to take the lead before going to halftime. Instead, it was James Harrison coming up with one of the most thrilling plays ever in a Super Bowl as he intercepted Warner and ran the ball back down the sideline 100 yards for the longest pick-six return in Super Bowl history to give the Steelers a 17-7 lead at the break.

James Harrison was born to run one back, giving the Steelers a ten-point lead at the half, as the Cardinals hoped to create their own glory days, following a halftime show that featured Bruce Springsteen. It was the Steelers doing a tenth avenue freeze out as they continued to dominate the time of possession, holding the ball for more nearly nine minutes as Jeff Reed kicked a 21-yard field goal to make the score 20-7 heading into the fourth quarter. Now facing desperation, the Cardinals began looking to get the ball to Larry Fitzgerald to keep their fading hopes alive. On a brilliant 87-yard drive, Fitz reeled in four catches, including a one-yard touchdown catch to get the Cardinals back in the game. After their defense got a three and out, the Cardinals had a chance to take the lead with five minutes left. The Cardinals would get the ball to the Steelers 36, but facing fourth down, Ken Whisenhunt decided to let the Arizona Defense make a big play to win the game as he chose to punt and pit the Steelers deep in the final three minutes. The call worked out as Ben Graham nailed a perfect punt to have the Steelers begin a drive at the own one, which would lead to a safety to shave the Steelers lead down to 20-16. That deficit would not last as the Cardinals needed just one play to take the lead as Kurt Warner connected with Larry Fitzgerald on a 64-yard touchdown that suddenly had the Cardinals in front 23-20 and dreaming of completing the impossible dream.

The Steelers would get a chance to answer, and it was Santonio Holmes who stepped up to play the role of hero. First, it was a 40-yard catch and run to get the ball down to the Arizona six. Two players later, Holmes again made the big catch tapping down both toes in the back corner of the end zone with three defenders on the back to give the Steelers the lead back with 35 seconds left. Looking for another miracle the Cardinals got the ball into Steelers territory before Kurt Warner was sacked by Lamar Woodley to end the game as the Steelers won 27-23 for their sixth Super Bowl Championship.

Santonio Holmes whose tiptoe through the end zone ended up being the difference was named the game’s MVP, catching nine passes for 131 yards, taking away the award from Larry Fitzgerald who likely would have won it, with 127 yards and two touchdowns on seven receptions had the Cardinals held on to win the game.