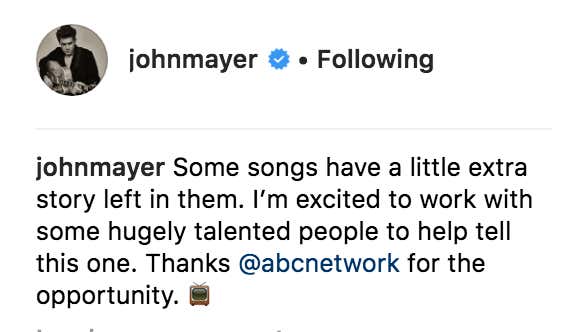 Complex- ABC has ordered a pilot to be made that’s based on John Mayer’s track “Heart of Life,” Variety reports. “Heart of Life” was featured of Mayer’s third studio album Continuum. The project was released back in 2006 and included the singles “Waiting on the World to Change,” “Belief,” “Gravity,” “Dreaming with a Broken Heart,” and “Say.” Mayer, as well as Ben Queen, Melvin Mar, Jake Kasdan, and Paul Weitz, will serve as executive producers on the show. Queen will also write. The project will be produced with ABC Studios and 20th Century Fox Television. Heart of Life will be the first TV show Mayer has acted as a producer for.

Heart of Life follows two sets of adult siblings from wildly different worlds who discover they are related and must reassess everything they thought they knew about their shared father. As they explore the mystery of their separate childhoods, they’ll experience the difficulty in overcoming the sins of the past, and learn the joys of reuniting with long-lost family.

Cool? Cool! Not totally sure what this means but I do love the song “Heart Of Life” so I’m on board with this show. It’s one of my favorite songs off one of my favorite albums of all time. Again, I don’t understand how they’ll turn one song into an entire TV show but luckily that’s not my job. My job is to sit back, relax and watch the show show whenever it airs. Sounds like there are a lot of talented people involved so it should be good and John Mayer is involved and he’s objectively good.

The important thing is that we’re getting more John Mayer-based content and I couldn’t ask for anything more than that. He’s been doing a lot recently. He does his Instagram Live show ‘Current Mood’ every Sunday night, he continually puts up the most interesting Insta stories, he’s going on tour with Dead & Company again this year and he just recently announced a solo summer tour where he’ll be playing a shit ton of dates. And now on top of all that, he’ll be a producer on a TV show based off one of his songs. Lotta things happening for our boy John Mayer and I’m thrilled. The more good things that happen to him the better. Oh and not to put yet another thing on John’s plate but we wouldn’t mind a new album. Just something to think about. K thanks.